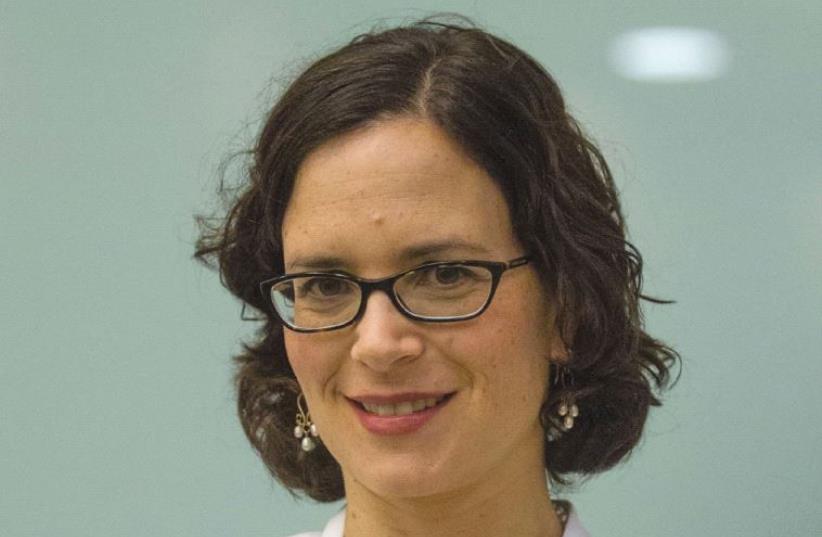 Kulanu MK Rachel Azaria
(photo credit: MARC ISRAEL SELLEM)
Advertisement
ALTHOUGH CHRISTIANS of all denominations enjoy far greater freedoms in Israel than anywhere else in the Middle East, they have two major reasons for concern. One was voiced last week by Greek Patriarch Theophilos III at the annual reception that President Reuven Rivlin hosts for heads of churches, Christian communities and Christian institutions in Israel, and the other was expressed in a letter sent in the first week of December to US President Donald Trump and signed by patriarchs and heads of churches.The signatories to the letter entreated Trump not to change the status quo of Jerusalem for fear that it would distance peace in the Holy City and increase hatred, conflict, violence, divisiveness and bloodshed. Their other concern was the possibility of the Knesset passing a bill to confiscate church lands that have been leased to third parties in order to prevent their sale and the possible eviction of apartment owners by the buyers of the land. The initiative for this bill, which is aimed at protecting residents from the possible loss of their property, came from Kulanu MK Rachel Azaria, a former deputy mayor of Jerusalem.The possibility that such a bill might pass has sent shock waves through churches with large land holdings. American philanthropist Michael Steinhardt, a co-founder of Birthright and a generous donor to the Israel Museum, has been reported as one of the major investors in Oranim Ltd., the company to which considerable plots of church land previously owned by the Greek Orthodox Patriarchate were reportedly sold. According to reports, the land had previously been sold to an Orthodox British Jew who in turn sold it to the Oranim group. Another reported shareholder is Israeli businessman and art collector David Sofer, who lives in London.Steinhardt was reported in the Hebrew press as saying that he would never evict someone from their home. It’s anyone’s guess whether the group with which he is associated bought the land to ensure that it did not fall into enemy hands via a straw buyer, or whether they bought it as an investment for their heirs, but don’t intend to do anything with it themselves. The leaseholds on some of the land on which properties have been built are supposedly valid for some 50 more years, but that was part of the original deal which the Church had with the Jewish National Fund. Whether these arrangements can be broken by a new owner remains to be seen.MEANWHILE, AZARIA is battling on another real-estate front – the Yemenite Valley in Ein Karem. In the early years of the state, the area was more or less barren and well removed from the center of the city.Immigration authorities sent Yemenites, Moroccans and Iraqis to live there under protected tenancies. Third and fourth generations of these families are still living there, but in the interim the city has grown and has spread in all directions and the land known as the Yemenite Valley has increased dramatically in value. The government now wants to evict all the residents and build high-rise residential towers. The residents are unlikely to receive compensation if the government succeeds in this endeavor and Azaria is trying to get the Knesset to pass a bill whereby all the veteran residents will be given title to the land on which they have been living for nearly seven decades. At the end of last week she had 61 signatures of MKs who were willing to support the bill.STILL ON the subject of real estate, French immigrant investor Laurent Levy, who has bought huge tracts of Jerusalem real estate, including the property that he transformed into the music center in Nahalat Shiva, is negotiating for the purchase of the Rachmo restaurant building opposite the music center. Rachmo, whose main branch is in Mahaneh Yehuda, will simply relocate from Nahalat Shiva, where it has been operating for 15 years, to elsewhere in the inner city.AFTER 44 YEARS at Hazvi Yisrael congregation in Talbiya, Rabbi Avigdor Burstein gave his swan-song sermon last Saturday, which coincided with the reading of the final chapter of the Book of Genesis.Burstein and his wife, Dina, moved to a new apartment several weeks ago and are located close to several synagogues. Well known for his erudition and his quiet power of oratory, Burstein has already been invited by three of the congregations in his new neighborhood to give sermons there.