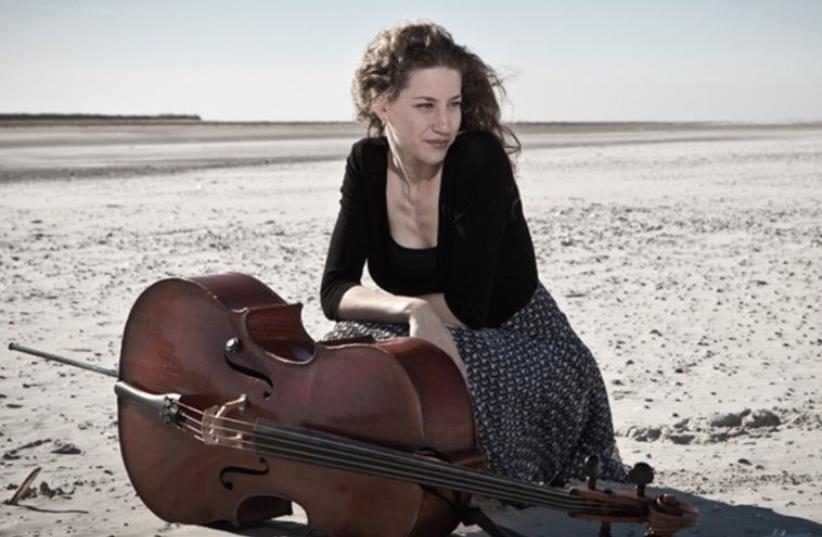 Cellist Michal Beck
(photo credit: FEIKO KOSTER)
Advertisement
Despite her youth, 23-year-old Michal Beck seems to have accrued quite a bit of musical mileage since she first took up the cello, but she is also looking forward to returning to her old stomping ground next week when she reunites with the Young Israel Philharmonic Orchestra (YIPO). Beck will fill the soloist role in a rendition of 20th-century Jewish Swiss-born American composer Ernst Bloch’s Schelomo, Rhapsodie Hébraïque for cello and orchestra at the YIPO’s concerts at the Jerusalem Theater on July 30 (8 p.m.) and at Heichal Hatarbut in Tel Aviv, the following day at noon.It is a sweet homecoming for the Jerusalem-born cellist. “I was part of the programs of the Jerusalem Music Center from the age of 14 and was also on the Goldman Program for Outstanding Young Musicians,” says Beck. “I played in chamber ensembles and worked with teachers and also did a chamber music summer course.”Beck and I met at last week’s Voice of Music Festival at Kfar Blum, where she was engaged in a number of concerts. I caught up with her following her contribution to a rendition of Robert Schumann’s Three Romances for Oboe and Piano , opus 94, arranged for flute and a string quintet. It was a stirring reading, and Beck certainly played her part, despite being the junior player by quite a few years.Beck says her time with the YIPO over a four-year period and at the JMC had a profound effect on her musical development, both by virtue of the quality of teaching staff at hand and because of the social advantages of being with like-minded youngsters. “It was important to be able to share my love of music with people my own age and also because the people around me were all outstanding musicians,” she says.The JMC not only caters to young musicians with extraordinary talent, but it is also keenly aware of the fact that adolescence can throw up all kinds of crises and challenges. “It is a music center, so that is its prime interest, but they also give individual attention to the young musicians,” Beck explains. “Music is a very demanding profession, and everyone has their difficulties to deal with, and you can get confused along the way. But there is always someone you can talk to on your level, people who are only too happy to share some of their own life experience.”The formula clearly worked well, and when it was time to do her military service Beck was duly recognized as a Gifted Musician. That allowed her to play all sorts of works on a variety of occasions and also left her time to further her musical education. She received a BA from Tel Aviv University, and she now spends much of her time at the Freiburg University of Music in Germany under the tutelage of Canadian-born French cellist Prof. Jean-Guihen Queyras.Beck started out on cello at the age of eight after several months of struggling with the violin. She made rapid progress, and by 12 she had learned the price of success. She won a Sharrett Scholarship from the America-Israel Cultural Foundation and, although delighted with the funding, she had to miss a friend’s bat mitzva festivities in order to attend the Sharrett Scholarship awards event. “The first time I won the scholarship I was in sixth grade, and the bat mitzva was of a very close friend. I was very frustrated, but I realized that you have to sacrifice things for music. It was a formative event in my life,” she recalls. Her friend, it seems, did not hold a grudge. “I think I took it harder than she did,” laughs Beck. “She had her party, but I couldn’t go to it.”Tenderness of years notwithstanding, Beck clearly has a mature head on her shoulders and says she has learned some important lessons about life and about the career path she chose en route. “I remember I thought that my life would change after I won the Sharrett scholarship, but then I saw that life just goes on. That’s when I understood that success and failure come and go, and you just carry on after that,” she reasons.It sounds like Beck underwent an accelerated maturing process at a pretty young age. “I think everyone takes these things in their own way,” she observes. “I see colleagues who make a big thing out of all kinds of things. They can be really down in the dumps after a good performance and over the moon after a good one. And there are others who look at things more philosophically.” Beck clearly belongs to the latter category.She has maintained her connection with the JMC, attending master classes from time to time. “I learn a lot from the classes,” she says. “I am certainly no master myself, and I have a lot to learn still.” Even so, she has shared some of her skill and life experience with younger students. “I taught some young pianists on a course called Young Pianist, which the JMC has been running for six years now. I play with a violinist and a pianist for the young pianists under the age of 15. It is a lot of fun, and we also get to learn a lot,” she says.With Beck’s current trajectory, it is pretty safe to say that she will maintain her learning curve for some time to come, and we can all look forward to plenty of star turns from the young cellist for many years ahead. For tickets and more information: (02) 560-5755 and 1-700-703-030