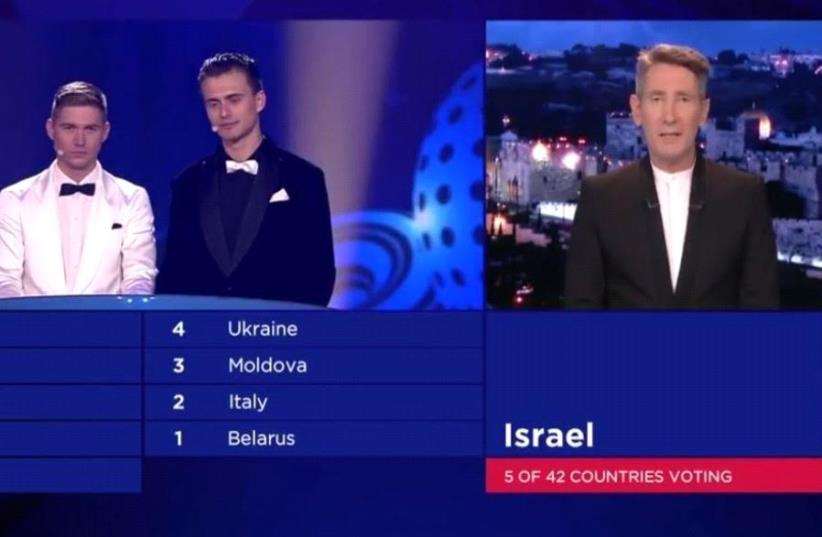 IBA'S OFER NACHSON appears on the Eurovision final Saturday night
(photo credit: YOUTUBE SCREENSHOT)
Advertisement
As tens of millions of fans around the globe were waiting to hear the winner of this year’s Eurovision Song Contest on Saturday night, they were plunged into the ongoing saga of the Israel Broadcasting Authority.Like every year, a representative of the IBA appeared live on the show to announce which acts Israel’s jury was voting for.But, unlike every other year, Ofer Nachshon also bid an emotional goodbye to the international singing competition. “For the past 44 years, Israel has participated in the Eurovision song contest, winning three times,” he told the Ukrainian hosts.“But tonight is our final night, shortly IBA will shut down its broadcasting forever.So on behalf of all of us here in IBA, let me say thank you Europe for all the magical moments and the beautiful music... and hopefully we shall meet again in the future.”Nachshon’s speech caused widespread confusion and panic on social media about Israel leaving the show after decades of participation.And European media picked up the story as well; a headline on the UK’s Mirror Online read: “Israel QUITS Eurovision Song Contest live on air after taking part for 44 years.” Similar headlines and stories appeared in the Daily Mail, The Sun and Der Tagesspiegel.But, as has been reported by The Jerusalem Post in the past week, the real story is not that black and white.It is true that this year’s Eurovision marked the final broadcast for the IBA, which shut down Sunday to make way for the new Israel Broadcasting Corporation. But it is not yet clear if Israel will continue to participate in the singing competition – which it has won three times, in 1978, 1979 and 1998.If the IBC, known as Kan, joins the European Broadcasting Union, then it can both participate in and air the Eurovision Song Contest each year. But the division between its news department and the rest of its programming laid out in a deal made between coalition chairman David Bitan (Likud) and Kulanu leader Moshe Kahlon may leave it ineligible.The EBU told the Post last week that it “has some reservations” about the new public broadcaster and is following the developments closely.It added that the body will only consider Kan’s application for membership once the network “becomes operational.”Nachshon – who will himself be moving to Kan – defended his speech in a radio interview on Sunday morning.Speaking to Galei Yisrael, Nachshon said, “It is not clear that the IBC will continue to broadcast the Eurovision.The EBU told Kan that without news they do not have permission to air the competition.” Nachshon added that his prepared remarks were approved by the highest management at IBA, including its CEO, Barry Bar-Zion.Whatever happens, one can only hope that Israel will be given a chance to redeem itself after its disappointing 23rd place finish in Kiev on Saturday night.Imri Ziv may have taken the stage first with his song “I Feel Alive,” but he finished near the bottom of the 26 finalists.The top spot went to Portugal’s Salvador Sobral, singing “Amar Pelos Dois” – the first-ever win for the country.Second place went to Bulgaria and third to Moldova.While Italy was the favorite heading into the show, it ended the night in a respectable sixth place.Last year, Israel came in 14th, and in 2015 it came in 9th place.While a small BDS campaign expressed satisfaction with Israel’s low standing, the showing was more likely due to Ziv’s unimpressive vocal stylings. The “Zero Points to Israeli Apartheid” campaign only garnered around 350 Facebook likes, and Israel beat out Ukraine, Germany and Spain as well as the 16 acts that didn’t make it to the finals.The close to four-hour show on Saturday was an evening in true Eurovision tradition, with sequins, drama and a host of strange props.The Italian performer had a dancing man in a monkey suit, while Norway was accompanied by a masked DJ and Spain’s crew was entirely outfitted in Hawaiian shirts.Romania’s entry was half rap, half yodeling and the singers brought two cannons on stage. Croatia’s performer was half English falsetto and half Italian opera, while Hungary had a rapper who also drummed on a metal milk jug. Belarus had a boat, Austria a crescent moon and Greece brought two shirtless men dancing in a puddle.But perhaps nothing was quite as strange as the entry from Azerbaijan, whose singer performed inside a room made of a chalkboard accompanied by a man wearing a suit and a horse head who was perched atop a ladder.Even while the votes were being tallied, and last year’s winner, Ukraine’s Jamala, was singing, a man clad in an Australian flag jumped on stage and flashed his bare behind before being tackled by security.With any luck, Israel will be back next year for another weird and wacky adventure.