In the Grain: The real story of Purim

A tale of rivalry, deceit and baking. 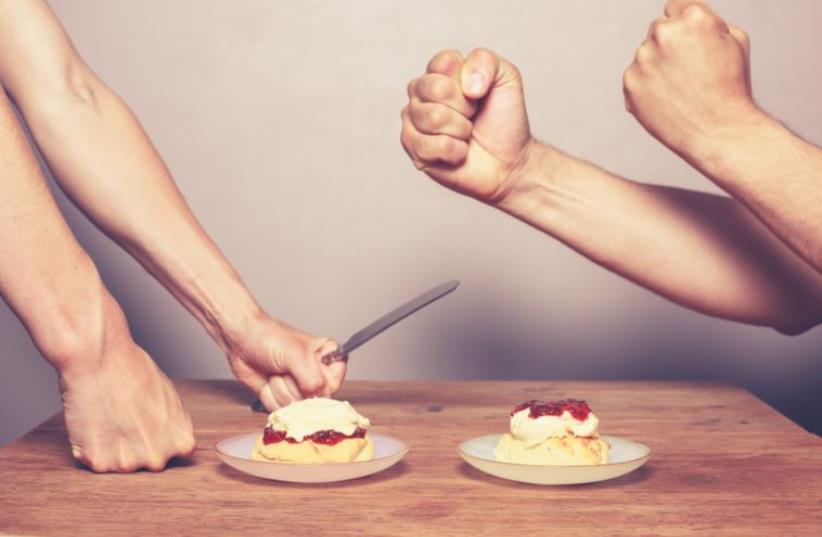 Baking rivalry
(photo credit: ING IMAGE/ASAP)
Advertisement
The traditional story of Purim is well known, but there is more to the Book of Esther than meets the icing. For the first time in print, I am going to reveal the real story of Purim, related by the famous Admor of Sourdough (you should see how they spell that in Yiddish) more than 300 years ago.The real story of Purim is all about two rival bakeries.Introducing the BT&T Bakery, a mafia operation run and managed by two infamous syndicate pastry chefs nicknamed Big-Ton and Terrace, so called because they would order big bales of flour by the ton and mass produce decorated “terraced” cakes, commonly used at royal banquets.In opposition was the M&M Bakery (short for Mishloah Manot), a small family bake shop run by Morthechi and Ester.According to Rabbi Shortcake, Morthechi was a former intelligence operative for the U.N.C.L.E. organization who, after retiring, went into the baking business, specializing in artisan baked goods and gift baskets. During his tour of duty in the Far East, Morthechi was entranced by the concept of natural “chi” energy, which he later incorporated into his baking and was wont to say “The more-the-chi the better.”Commentators are divided over the origin of his niece Ester’s name. According to one opinion, it is derived from the ancient Persian word “yeaster,” a popular leavening agent at the time. The prevalent consensus, however, is that the name Ester is derived from the chemical ester, a fragrance compound. This opinion is based on the verse “Six months in the Chanel No. 5 and six months in the Shalimar” (Book of Ester, 2:12).Ruling the kingdom at the time were King Achorberosh and his exquisite Queen Washdi. The domesticated queen was an avid baker and staunch feminist who insisted on washing her own dishes. Achorberosh suffered from severe migraines, usually after sampling his wife’s fare. The king, who had a soft spot for BT&T terraced cakes, decided to throw a banquet, but Washdi put a spanner in the works and insisted on in-house catering. After she served him a flopped flan, the king decided enough was enough and put out a contract on his wife. A week later he got the word “Your wife sleeps with the dishes.” Now, finally, he could find a spouse who could bake a great crème brûlée.It was a time of turmoil for the baking industry, fueled by fierce competition, with everyone vying for coveted royal contracts.Morthechi saw this as a perfect opportunity to put an inside man (or woman) in the royal palace and suggested Ester apply for the vacant spot of queen. Ester came up smelling like a rose, and the king fell in love with her baking, especially her golden sherbet sticks. He gave as her personal assistant Shush-gaz, who was in charge of lighting and dousing the royal gas ovens.Enter our villain Hey-man, a megalomaniac G-man with a god complex. Hey-man was the director of the PDA (Persian Dough Administration), the government regulatory authority in charge of licensing royal bakeries. He favored tycoons and large corporations, whoever could pay him more dough under the table and despised the underprivileged. It is rumored that he once dropped a homeless person off the roof of a three-story building. (re: “Hipil poor,” Book of Ester, 3:7). The origin of his name is from the Hebrew root “haman” meaning “the man.” In fact, to get any kind of royal consideration, you had to kowtow to him and say, “You the man!” Morthechi, who followed Rabbi Gamely’s sage advice of not getting in too tight with “the man” (Ethics of the Old Fogeys, 2:3), refused to bow down to this nonsense and aroused Hey-man’s ire. Each time Hey-man saw Morthechi, he was incensed, and he vowed to pass legislation eradicating all small artisan bakeries from the kingdom and allowing only large chain bakeries that fix prices (like BT&T).When Morthechi learned of Hey-man’s evil plot, he had Ester plan a party for the king and Hey-man in which she would expose the villain. A trembling Ester approached the king, not knowing if he would cooperate or not. The king extended a golden sherbet stick to her and promised to attend the soiree.The next day, Hey-man, all puffed up with his own self-importance at being invited to such a prestigious event, was blindsided by a chocolate chiffon cake and, while stuffing his face, was exposed by Ester to the king. Furious at having been duped by Hey-man, the king went outside for a breather. Spluttering with a mouth full of chocolate crumbs, Hey-man begged Ester for mercy.The king re-entered just as Hey-man was swallowing the last remnants of the scrumptious cake. “Caught with your hand in the cookie jar” roared the king, and Hey-man’s fate was sealed.Morthechi was appointed as director of the PDA in Hey-man’s place. With Ester’s help, he managed to prevent any harm to artisan bakeries, stop all price fixing and hang BT&T out to dry.To celebrate, artisan bakers from all four corners of the kingdom declared a two-day holiday with much giving of gift baskets and helping the poor.The story ends with king Achorberosh placing a bread tax on the entire realm and removing all government subsidies.And that, as Rabbi Carey says, is how the cookie crumbles! Happy Purim to you all.PURIM FOLARES
This Sephardi recipe symbolizes Haman trapped in a cage.✔ Hard boil 6 eggs. Let cool and remove shells.For the dough
✔ 2 cups flour
✔ ½ cup water
✔ 3 Tbsp. oil
✔ 3 Tbsp. sugar
✔ ½ tsp. salt
✔ 2 tsp. instant dried yeast
✔ 1 egg Mix and knead for 10 minutes. Leave to rise for 90 minutes. Roll out dough on surface about 1 cm. thick. Cut circular discs using a glass or cup, one for each hard-boiled egg. Re-roll the rest of the dough and cut into thin strips. Place a hard-boiled egg on the circular dough base. Drape strips over the egg and attach to base (resembling bars of a cage). Baste with egg wash and bake at 180° for 25 to 30 minutes.
Advertisement
Subscribe for our daily newsletter