'Jerusalem is the center of my spiritual world'

David Breuer-Weil expresses love for the holy city in his modern sculptures he spreads around it. 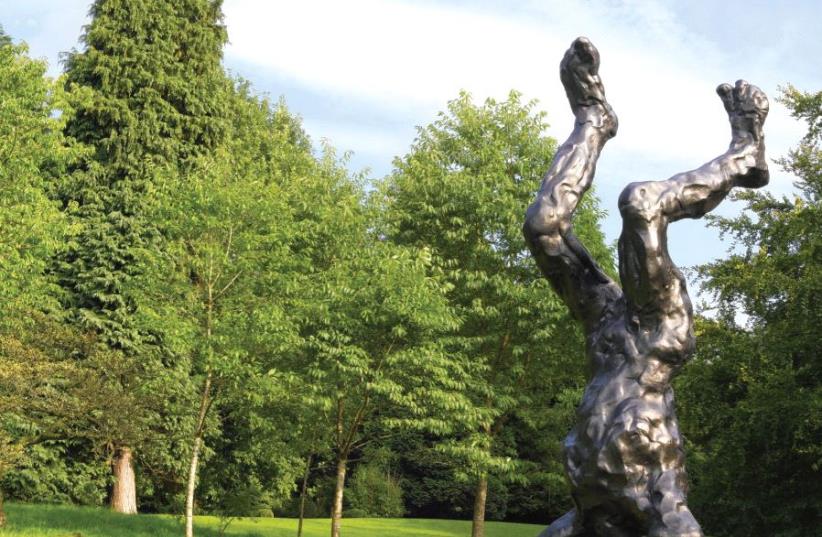 'Alien,’ 2012, bronze, height six meters, Berardo Museum, Lisbon
(photo credit: SOTHEBY’S)
Advertisement
A humanoid figure that crash-landed headfirst into the Earth stands six meters tall in the courtyard of St. Pancras Church in Euston, London.Artist David Breuer-Weil based the sculpture, called Alien, on his grandfather Ernst Breuer-Weil’s experience after arriving in the UK as a refugee from Nazi-occupied Vienna in 1938. “At first glance, Alien is extraterrestrial, but the real subject is the challenge of being an outsider or immigrant,” he explains.

The monumental sculpture is one of a series being exhibited in outdoor spaces throughout central London this month in an unprecedented outdoor sales exhibition put on by auction house Christie’s. The sculptural trail of figurative works includes significant artist-chosen works such as Brothers, Visitor and Emergence, which explore the conflict of opposites, including components such as belonging and alienation; frailty and endurance; communication and reconciliation – prompting more questions than answers.In the last few years, Breuer-Weil’s work has also transported him to Jerusalem. Unable to place figurative sculptures in the Holy City for religious reasons, the objective for the polished stainless steel works on permanent view is “spiritual content.”“Jerusalem is the center of my spiritual world,” says the London-born and bred, 51-year-old father of three. “I was inspired by the atmosphere – particularly the clear light and sense of significance of every stone there,” he explains. “They are all about light and reflection and for that reason I used stainless steel that reflects the skies and buildings of Jerusalem.”Center of the World, situated in Teddy Kollek Park, is based on a Renaissance map by Heinrich Bünting showing Jerusalem at the center of three continents.The sculpture, which reflects the walls of Jerusalem by day, allows visitors to physically enter the sphere-like structure for contemplation. The seas and oceans are suggested by the cutaway sections between continents, which at night become patches of light, as the work is internally lit.The sculpture was commissioned by Helene Stone Laor in memory of her husband Eran Laor, an antiquarian map expert. He owned the Bünting map together with hundreds of other legendary early maps of Israel.Breuer-Weil’s design, which was chosen from a shortlist, had to be approved by the Jerusalem Foundation and other committees before being given the go-ahead.Soul is also focused on the theme of the world, fusing a globe with a human being.“I wanted to make a work of art in which man and the world become one,” explains the artist. Commissioned by the family of Marilyn Rosenfelder in her memory, the sculpture was dedicated and placed at the entrance to the new wing of the Next Generation Building at the Shaare Zedek Medical Center.“Inspired in part by my first Jerusalem sculpture when I made this work, I thought of the famous talmudic dictum that whoever saves a life saves the whole world, and a hospital like Shaare Zedek saves the world practically every day, multiple times.”Much of the Orthodox artist’s creativity comes from his study of the Talmud, which he does religiously for one hour each morning at a Daf Yomi class near his home in northwest London. There he studies aggadic (narrative and mystical) areas of the Talmud. He credits the study with fueling his imagination, resulting in paintings with “multiple layers of meaning.” This can be seen in his more than 200 large-scale Project series paintings, several of which reference the Holocaust.Inspiration came from those who have borne witness, in particular, writer Primo Levi and Breuer-Weil’s friend Sam Pivnik, whose testimony was published as Survivor in 2012.One of the most powerful in this series is the monumental canvas Crate, in which figures stand in a honeycomb of cubicles and we peer down on their shaven heads and stifled bodies. Another, called Commodity, sees thousands of individuals contained within a great mountain of boxes. This, says the artist, is “an expression of the dehumanization that was characteristic of the 20th century tragedy.”
Breuer-Weil’s undergraduate dissertation at Clare College in Cambridge was on Holocaust literature; he shared literary critic and philosopher George Steiner’s concern that Holocaust art would never be able to reflect the hell of that period. The problem, he observed, was that fictionalizing the victims’ experience risked violating it. It is for that reason that none of these works contain any clear depictions of the Holocaust.Rather, they can be described as a modern version of medieval apocalyptic paintings, such as were painted by Giotto, Masaccio, Michelangelo and Tintoretto.Breuer-Weil’s paintings are filled with symbols and metaphors about the human condition in a general sense.“These are existentialist works about the limits of endurance, imbued with the most intense emotion.”The artist, who is also a dealer and collector with a passion for the Jewish artifacts of destroyed communities, believes that the Holocaust has entered the unconscious minds of the second and third generations “in a very profound way and has colored our vision of life.”“Those particular paintings have more to do with that inheritance than the events themselves, because I would never attempt to illustrate them.”Breuer-Weil’s imagination has been filled with “complex imagery” for most of his life. As an 11-year-old joining London’s Hasmonean High School, he invented a fantasy world of imaginary friends through drawings in the margins of his exercise book. They were creatures of a bizarre prophecy, which he called the “Kingdom of Nerac.” This was the subject of a documentary on Breuer-Weil – The King of Nerac – that premiered in London and New York in 2013.It is this fictional kingdom of Neracian images, together with his childhood memories and family history, that forms the infrastructure of his creative mind. But it is his philosophical vision of the world, to which he bears witness, that is fundamental to his artistic integrity.Having recently discovered that he is a direct descendant of philosopher Rabbi Judah Loew ben Bezalel, the celebrated Maharal of Prague, his conviction that creating art is as much a philosophical as an aesthetic enterprise, has been reinforced.“Some people are uncomfortable with art that asks questions. But for me that’s the whole point. Art is not about producing decorative or marketable objects, but a way to philosophize in paint, pencil or metal and turn thoughts into emotion. My father taught me early on that art is the one area of life where you can be truly independent.”For more information about the London show: www.christies.com