Milk & Honey is "in a different category to Scotch and Bourbon," but nonetheless "gorgeous," according to British expert. 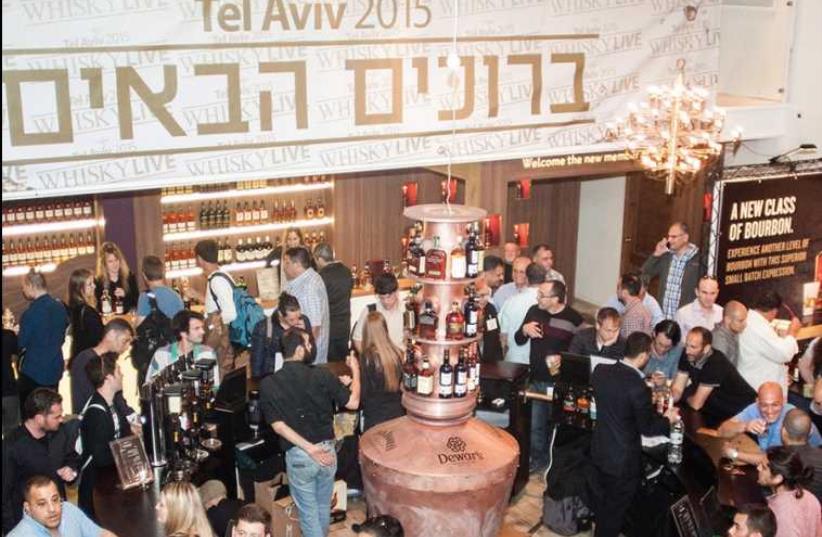 Nearly 6,000 people attended the three-day festival sampling 350 brands of whisky.
(photo credit: SARAH LEVI)
Advertisement
“Ooh. Umm. That’s gorgeous,” purrs world-renowned British whisky writer Dominic Roskrow, as he samples the malt spirit from Milk & Honey, Israel's first whisky distillery. Although not yet officially whisky, since the honey-colored liquid has to mature in barrels for at least three years before earning that moniker, Roskrow tells the Media Line why he was smacking his lips. “Israel’s a warm climate, so this at 15 months tastes like a three-year-old whisky might, but very good. There’s nothing sappy about it. At three years, we can expect it to taste like a six year old.” Milk & Honey's declared mission is to produce Israel's best Single Malt whisky, and its black and yellow striped bumble-bull symbol is meant to suggest the two components of its name, explains CEO Eital Attir. They chose to substitute a bull for the cow “because it's whisky, you know, it’s a bit rough. It’s not a cow.” However, despite Attir's insistence on referring to his single malt as “not whisky yet,” following EU (and Scottish) regulations about the barrel time necessary before what is essentially moonshine can be referred to as the real stuff, according to Roskrow it is anything but rough. “There are only two ways you can make whisky,” he explains. “You can try and do it like Scotland does, and you will almost certainly fail, or you can dare to be different, make a whisky which reflects your heritage and culture and adopt local customs, grains and production methods to produce a whisky that is unique.“That’s how I see the best new world whisky – it is in a different category to Scotch or Bourbon and comparing it to those categories is as relevant as comparing Aussie Rules footie to Soccer or American Football. It’s not better, not worse, just different.”Milk & Honey also sells an iconoclastic and addictive Levantine Gin, heavy on the flavors of Jaffa oranges and wild hyssop (zaatar) with three small-batch ventures into the world of pre-whisky, ranging from 155 to 500 bottles each. The first, “Cask 004” deep amber in color, has spent eight months in casks formerly used for Israeli Cabernet Sauvignon vintages. The second, “Cask 010” is allowed to rest for six months in barrels of new American oak. Eventually, these will be component parts of a grand, new Israeli whisky. For now, the closest you can get is “Live 100”– although there are almost no bottles left to buy. “Live is a blend of five different casks,” head distiller Tomer Goren tells The Media Line, and is made from malt spirits that have spent from two to 14 months in barrels. “It’s a taste of what our end product will be, the very best, I think.”Unusual among distilleries, Milk & Honey is unabashedly urban, located in the heart of south Tel Aviv, right next to the Lewinsky market where the spices for its gin originate. Israel’s two other nascent whisky distilleries, Golan Heights and Pelter, are located in the chiller far north, near the Syrian border. On his second whisky hajj to Israel, reporting for Whiskey magazine, Roskrow points out that however strict the Israeli adherence to the formalities of whisky production, the UK’s exit from the EU – a situation he deplores – could break the market wide open. “You don’t have to be bound by that. Americans are putting out stuff that is two minutes old and, I don’t know, but something’s wrong with it.” Later, in a master class hosted by John Quinn, the global brand ambassador for Ireland’s Tullamore Dew whiskey, Roskrow says that the current burst of boutique distilleries, while nice enough, is not in itself evidence of quality production of fine whiskies. And he's about to put that expertise to the test – after a decades-long career covering the best (and some of the worst) whiskies in the world, Roskrow is about to trade in his laptop for a distiller’s smock. “Whisky writer Dominic Roskrow is launching his own range of “new world” whiskies using liquid sourced from non-traditional regions of the world,” a website called the “spirits business” announced recently, adding that “Roskrow’s Discovery Road collection will eventually consist of several bottlings of whisky – all of which will be bottled at 46% abv [alcohol by volume] – from across the world, including India, Taiwan, France, New Zealand, Sweden, Holland and England.” While Israel is not listed, the country is part of the same trend and its whiskies will surely belong to the category of “new world whisky” that Roskrow is confident his Discovery Road will create.