If music be the food of love... 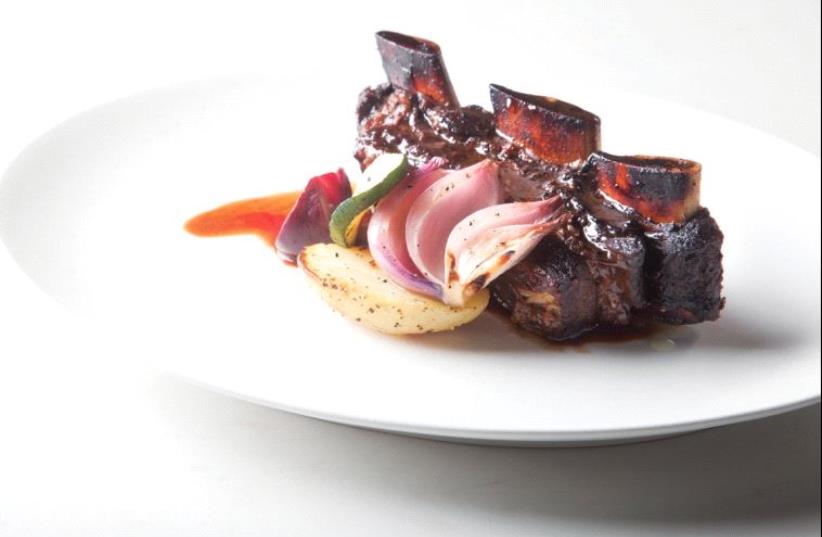 Kinor Bakikar
(photo credit: PR)
Advertisement
Once the home mainly to falafel and shwarma stands and other fast food variations, the downtown Jerusalem area has recently burst open with an array of sit-down kosher options.One of the primary culinary magnets is Kikar Hamusica, the spacious complex on Yoel Salomon Street in Nahalat Shiva developed by French immigrant Laurent Levy. In addition to live music, the Hebrew Music Museum and art galleries, it houses a number of eateries including the dairy Italian staple Piccolino, The Blue Hall live music venue and the French bakery Gourmandises.The latest addition is the French-tinged grill bistro Kinor Bakikar, which opened its doors last month.Featuring a selection of grilled meats utilizing a Josper charcoal oven, as well as a variety of other meat, fish and vegetarian options, the elegantly designed and expansive venue (seating up to 200 diners) is courting the upscale tourist and local clientele who prefer cloth napkins, white tablecloths and impeccable service to Jerusalem street fare.Unobtrusive light jazz plays in the background as patrons study an extensive wine menu and peruse the one-page but comprehensive list of appetizers and main dishes. Each table receives a warm, baked-on-thepremises focaccia with five tasty sides such as a zesty carrot salad, piquant tehina and savory eggplant spread.We chose two appetizers – the lamb-filled empanada, served with chimchurri and tehina (NIS 42) and the pizza with roast beef, made from veal entrecote, onions and mustard (NIS 45). The empanadas were tasty, but someone had a heavy hand in salting the dish during preparation, and the pastries were only lukewarm. The pizza was certainly a unique take on the traditionally cheese-laden pie and definitely worth a try. However, the thinly sliced meat was somewhat overpowered by the overly spicy mustard-based sauce.Other appetizer selections included chickpeas and white beans with ragu veal and mushrooms (NIS 38); tempura vegetables (NIS 38); and spicy merguez sausages (NIS 45). Chef Koby Katani sent out a complimentary pate de foie gras with chicken liver on toasted bread and garlic jam that was smooth beyond belief and simply out of this world.The main courses are divided between meat skewers and entrees.The former includes Jerusalem mixed grill (NIS 42); veal entrecote (NIS 56); barbecued spring chicken in lemon garlic and thyme (NIS 42); and breast of duck with date honey syrup and pears (NIS 48). Diners can add side dishes of fries, pureed potatoes, grilled vegetables, salad or green beans for NIS 15 each.The duck was seasoned precisely, and the Josper oven did it justice, resulting in a tangy, sweet taste and tender chunks of meat.But the main attractions came from the entrees side of the menu, where the 300 gram veal entrecote steak with roasted garlic and fries (NIS 152) competed with the fillet of grilled sea bream with fork mashed potatoes, spinach and grilled peppers (NIS 89) and ribs of lamb with stir-fried mangold, chickpeas and Persian lemon (NIS 146).We chose the roast fillet of beef with shallots and Portobello mushrooms (NIS 165) and the sixhour beef asado with chimchurri sauce, onions and grilled peppers (NIS 98). We were not disappointed.The huge asado was sitting in a dark brown, delicious beef sauce that complemented the sweet but slightly stringy meat. The beef fillet was also enormous and succulent.However, again, there was a little too much salt in the preparation process that detracted from the full enjoyment of the dish.The dessert selection included the ubiquitous chocolate soufflé cake, sorbet, apple tart, profiterole and chocolate mousse (each NIS 42), as well as a fruit platter and a miniature pastry platter (both NIS 56). The mousse and the apple tart were about as good as you can get for parve desserts (although the tart would have been even better warmed up).Kinor Bakikar has its heart in the right place, and the too salty/not warm enough issues are sure to fall by the wayside as the restaurant settles into its groove. Then it will be music to the ears, and the stomach.The writer was a guest of the restaurant.Kinor BakikarKosher12 Yoel Salomon St., JerusalemTel: 02-9944902