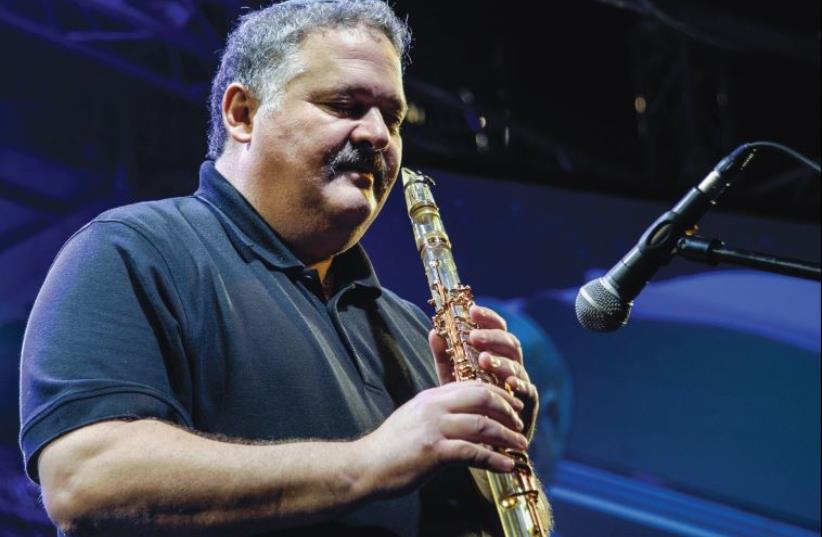 THE SECRET of the Klezmer is to unite the Jewish people... The music is very connected to our history. It is the sound of the Jewish people,’ says Klezmer clarinet player Hanan Bar-Sela.
(photo credit: ZVI YUCHTMAN)
Advertisement
Hanan Bar-Sela ran the hugely successful Klezmer Festival in Safed for many years. In recent years, he brought his midas touch to Jerusalem by starting the Jerusalem International Klezmer Festival, which has also been widely successful. This year, Bar-Sela decided to offer Klezmer fans a new treat by putting together a one-night concert event (tonight at 5 p.m.) in Petah Tikva.Bar-Sela sat down with The Jerusalem Post to talk about the first time he heard the clarinet, the secret meaning of Klezmer music, and transitioning his festival from Safed to Jerusalem.How did you first get into Klezmer music? I was 10 years old and my friend had bought a Giora Feidman CD. I heard the music and that was it. Then one day he came to perform in Netanya and I went to the concert. I remember it; it opened my mind and my heart. It was such a special style of music. From this time on, I was very excited about Klezmer music. That’s how it all started. I was the artistic director of the Klezmer festival in Safed for 16 years. For the last three years, I’ve been running a new international Klezmer festival in Jerusalem in August. It’s been a big success, with artists from all over the world. This year it will be from August 16-23. We invite many artists from all over the world and also many different instruments, both conventional and unconventional. Usually, we end the Jerusalem festival with the last concert in Petah Tikva. So this year, we decided to do another big concert in Petah Tikva in March. We have a very talented flute player performing, Konstantin Moskovich. He’s an amazing player. He will play with five or six Israeli musicians, including myself. There will also be an amazing accordion player.

So you not only organize these events, you also play Klezmer music? Yes, I play clarinet. After the first time I heard Giora Feidman play, I knew that I wanted to play that instrument. At his concert when I was a child, I decided that I would play the clarinet. So I told my parents when I got home, and from then until today, I’ve played. For the past 10 years, I have had a concert with another very talented Klezmer musician.How many people do you expect for the concert in Petah Tikva? We are sold out and expecting 800 people.What was the transition like from running the festivals in Safed for so long to now running festivals in Jerusalem and Petah Tikva? We had a request from the Jerusalem Municipality to establish an international Klezmer festival in Jerusalem, and so I decided I wanted to do something new and this would be it. Sixteen years was enough for me. But really, when we are on stage, it doesn’t matter where we are; we play to bring the audience happiness.I heard something very special from clarinetist Giora Feidman. The way the word “Klezmer” is spelled in Hebrew, the first three letters stand for Cohen, Levi, Yisrael.The second half, zemir, is “melody” in Hebrew. So you have the melody of the all the Jewish people. Klezmer incorporates all of us. Zemir, if you switch the Hebrew letters around, can become remez, which means “secret.” The secret of the Klezmer is to unite the Jewish people.

Do you feel like Klezmer music is so tied to the history of the Jewish people that it carries us within it? The music is very connected to our history.The music was played all over the world at Jewish occasions like weddings for example.So yes, I feel that way. It is the sound of the Jewish people. There is a famous hassidic story about a rabbi who heard Klezmer music being played at the wedding of a young couple. He loved the melody so much that he requested that the same song be played when he left the world.Who is your favorite Klezmer musician? It is for sure Giora Feidman. He is 80 now and he’s a wonderful Israeli artist. He succeeded [in putting] the Klezmer tradition in concerts with the most important orchestras all over the world. He is responsible for continuing the Klezmer tradition for this generation. For me, as a child, when I listened to his CDs, he really opened my heart. He is definitely my favorite.
Advertisement
Subscribe for our daily newsletter