Kosher sophistication by the sea

Gazpacho is a delightful kosher Mediterranean bistro in Ashkelon. 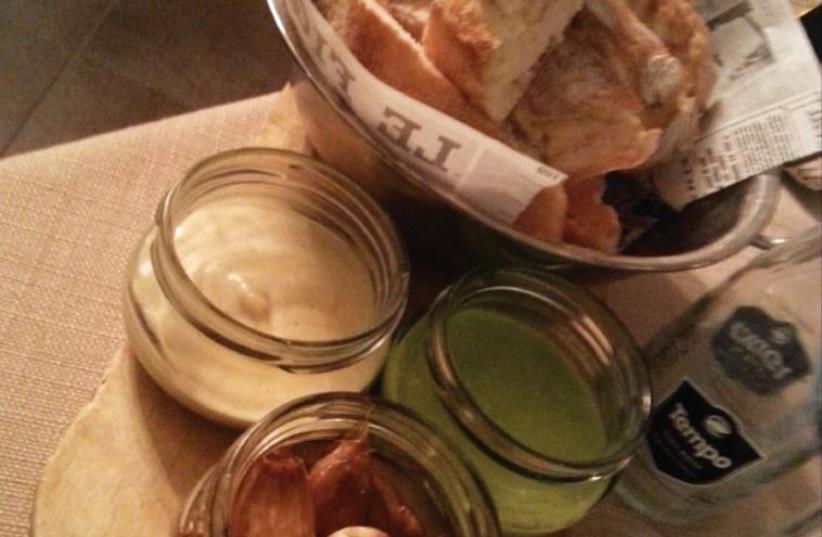 Gazpacho
(photo credit: PR)
Advertisement
For those looking for a sophisticated and romantic dining experience overlooking the sea, Gazpacho comes well recommended. Located in the Holiday Inn right on the oceanfront in Ashkelon, you could hardly ask for a better setting.In this kosher Mediterranean bistro, run by chef Guy Peretz, patrons are greeted by a welcoming ambience, modern decor and a spacious dining room. It’s clear that Peretz is a colorful character on the culinary scene, and he gives the impression of someone who has dedicated his life to good food and wine.The menu is quite extensive, with a wide array of salads, pastas, fish and meat dishes.Soon after we were seated, the waitress arrived with an appetizer of fresh bread accompanied by three excellent spreads: garlic confit, tahini, and a spicy green pepper dip. Each spread was so tasty, that we would have happily kept on eating them had the first courses not arrived.We began with an assortment of salads (they can be ordered separately or all together for NIS 139). While all the salads were delicious, a stand-out was the roasted Andalusian eggplant with tahini. Roasting the eggplant in its skin created a silky texture, echoed in the smooth tahini sauce, and the lemon cream and harissa added a fresh bite and citrus note that brought it all together.Another highlight were the roasted beets drizzled in olive oil and balsamic vinegar. I was amazed at how well the balsamic and a drizzle of fruity olive oil played off the sweet beets. I can’t believe no one had ever thought of such a simple combination.After a bit of a breather, it was time to embrace our inner chefs, as we were presented with the task of cooking succulent thinly sliced pieces of sirloin steak on a hot stone exactly the way we wanted it done. This was a fun, healthy and interactive dining experience. And the steak was cooked perfectly because we did it ourselves. Magically, the stone remained hot throughout the meal, still sizzling by the time it was taken away when we were done eating.For the main course, we had the Gazpacho special for two, which consisted of slices of aged entrecote, grilled spring chicken skewer and veal kebab. The entrecote itself was flavorful; however, I found it way too fatty around the edges. The chimichurri sauce accompanying the meat was very good – not too garlicky or lemony. The spring chicken was extremely tender and succulent. The kebabs were solid, with an almost sausage-like texture and surprising subtlety.When it came time for dessert, we were presented with a variety of options. The caramel mille feuille was very tasty. But I think the winner was the espresso macarons with vanilla ice cream. Even though we had eaten far too much already, we strove valiantly to finish this rich coffee creation.
The writer was a guest of the restaurant.Gazpacho
Kosher
Holiday Inn
9 Yekutiel Adam Street, Ashkelon
Tel: (08) 674-8886