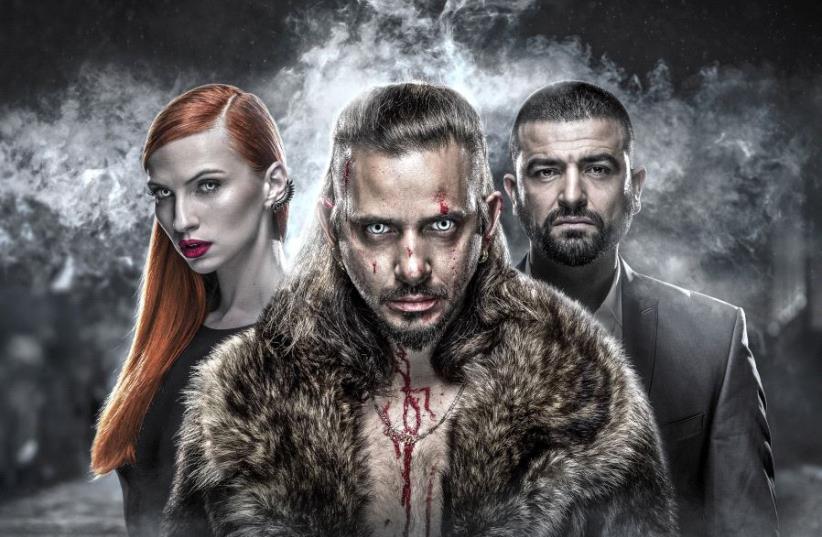 ANASTASIA FEIN, Tzion Baruch and Amos Tamam get mixed up in the dark world of 'Juda.'
(photo credit: OHAD ROMANO)
Advertisement
Why has there never been a Jewish vampire? This is the question Israeli actor and comedian Tzion Baruch is seeking to answer in his intense, bizarre and unquestionably unique new TV show, Juda.In a tale that involves rabbis, dogfighting, poker in Romania and a tenants’ committee shakedown, Baruch, who created and wrote the show for HOT, stars as the eponymous Juda Ben-Haim, a small-time criminal who makes his money playing poker in Bucharest with funds from bigger-time French criminals.But on a trip to Romania with higher stakes than usual, Juda’s life takes a very different turn. The first sign something is off comes during his encounter with a rabbi in Ben-Gurion Airport who tries to get Juda to put on tefillin. Juda runs for the gate, late for his flight, but not before telling the man that he has dreamed about the rabbi featured on his literature. “No, impossible,” replies the rabbi, with a look of horror.And while rabbinic encounters appear set to play a role across the series, it is Juda’s rendezvous with a Romanian vampire pretending to be a prostitute that truly sets him on a disturbing course of events.Juda, after winning an impressive amount of money from a Lebanese man (whom he told he was from Italy), is visited by the vampire. She sinks her fangs into him and takes off with the cash, but is horrified by the taste of his Jewish blood. Romanian vampires, it turns out, are not allowed to bite Jews, and she has brought shame and misfortune to her family (plus, she was apparently supposed to be able to smell his Jewish blood before biting). Juda, meanwhile, is on his way back to Israel, without the money and with a developing desire to consume blood. Jewish vampires, it seems, take eight days to reach their full potential (there’s plenty more heavy-handed symbolism where that came from). And those eight days will not pass by quietly, as he is pursued by criminals, the police, the Romanian vampire family and, of course, rabbis.The show is incredibly kitschy, and slips back and forth between horror, comedy and thriller with ease. It is telling that the most bizarre portion of the first episode may not have been when Juda and the beautiful female vampire lip sync together to the 2011 Gotye hit “Somebody That I Used to Know.” With rave reviews in Hebrew media, which praised Juda as fun, trashy and entertaining, this is a one-of-akind show that is likely to stick around.Juda, which premiered last week, airs on Thursdays on HOT3 at 8:15 p.m.