‘Bird on a Wire’ features wild footage from 1972 Tel Aviv and Jerusalem shows. 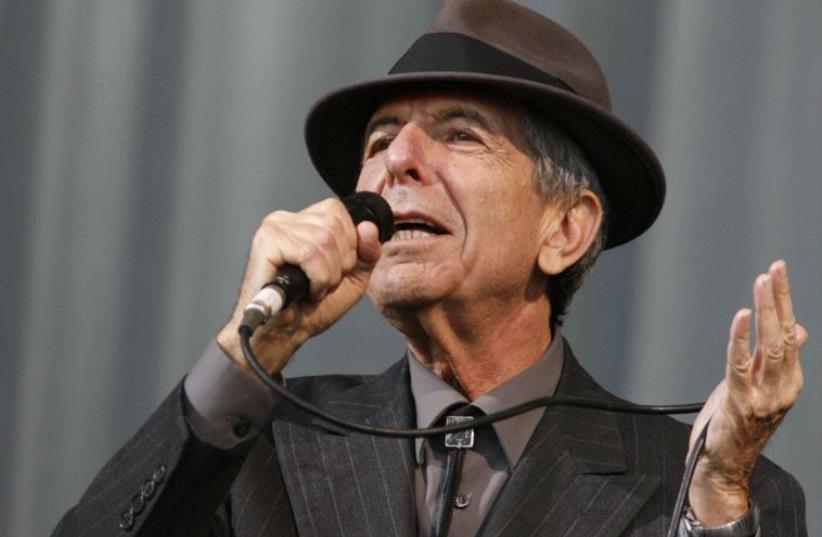 Jewish-Canadian singer-songwriter Leonard Cohen.
(photo credit: REUTERS)
Advertisement
Forty-four years after it was first screened, a long-lost documentary on Leonard Cohen is likely to appear on screens across America this year.The movie, Leonard Cohen: Bird on a Wire, was filmed by Tony Palmer during Cohen’s 1972 tour of Europe and Israel. It premiered in 1974 in London, but then disappeared and was considered to be a lost. According to Rolling Stone, Cohen hated it and Palmer didn’t keep an original copy.But last year the film resurfaced, and was screened at New York’s Film Forum – just a few months after Cohen died. And according to a report in Deadline on Thursday, the documentary has now been picked up by North American distributor Synicado for release to streaming sites like Amazon and Netflix.The film was notable for its up close and personal look at the Jewish singer/songwriter and at how many things went wrong during the 1972 tour. During Cohen’s concert in Tel Aviv, at the Yad Eliyahu Arena, a fight broke out between police and concertgoers that delayed things. “I know you’re trying to do your job,” Cohen said from the stage, “But you don’t have to do it with your fists.”Then in the very last show of the tour, at Jerusalem’s International Convention Center, Cohen had a meltdown and walked off stage several times, saying he’d simply refund the tickets. Cohen asked the audience to stop applauding when he started songs, but they couldn’t help themselves, and he said: “Look, if it doesn’t get any better, we’ll just end the concert and I’ll refund your money... Some nights one is raised off the ground, and some nights you just can’t get off the ground. And there’s no point in lying about it. And tonight we just haven’t been getting off the ground, and it says in the Kabbala... It says in the Kabbala that if you can’t get off the ground you should stay on the ground!... And this is a terrible thing to have happen in Jerusalem.”Cohen went backstage to his dressing room, took some acid, and heard the audience begging him to return. He went back in tears and tried to continue performing.In a 2016 interview with The New Yorker, Cohen said he remembered the incident very well.“The entire audience turned into one Jew! And this Jew was saying, ‘What else can you show me, kid? I’ve seen a lot of things, and this don’t move the dial!’ And this was the entire skeptical side of our tradition, not just writ large but manifested as an actual gigantic being! Judging me hardly begins to describe the operation. It was a sense of invalidation and irrelevance that I felt was authentic, because those feelings have always circulated around my psyche: Where do you get to stand up and speak? For what and whom?
And how deep is your experience?”These emotional moments were all captured in Bird on a Wire, named for one of Cohen’s songs, and will now return to the public eye.Despite the disastrous Jerusalem show, Cohen returned to Israel just a year later, during the Yom Kippur War, to entertain IDF troops. He later came back in 1980 and then again in 2009.