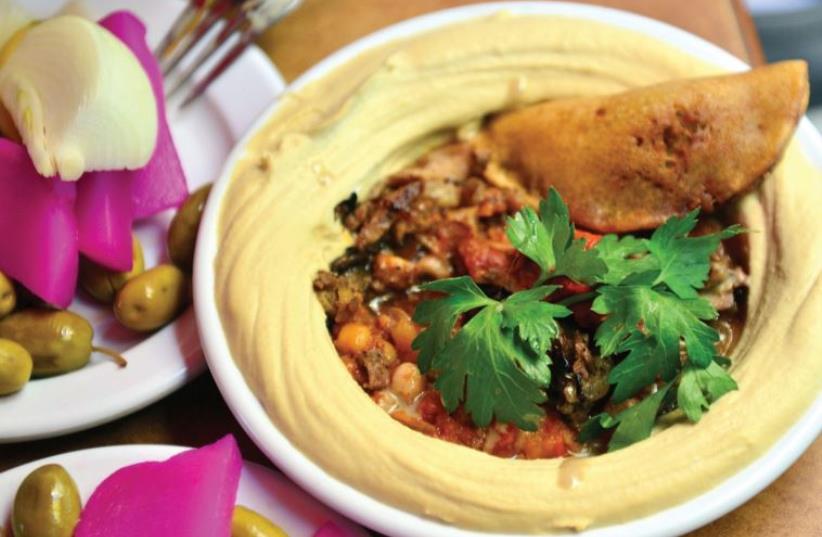 Hummus
(photo credit: Courtesy)
Advertisement
Winners of television’s Master Chef Israel competitions invariably get big boosts to their culinary careers; most go on to open their own restaurants. However, 2014 winner Nof Atamna-Ismaeel of Baka al-Gharbiya in the Triangle took her newfound fame in another direction.She became the driving force behind establishing Israel’s first Arab food festival.The A-Sham Festival, which took place in downtown Haifa last week, paired Jewish chefs with Arab eateries and Arab chefs with Jewish-owned restaurants. Together, they created dishes to showcase Levantine cuisine, while celebrating coexistence through the universal language of food.The first day of tastings revolved around Ismaeel’s Project Hummusiyot initiative. Four of Israel’s leading chefs were matched with an equal number of Haifa’s most popular hummus eateries, and tasked with creating a dish designed to elevate the universally loved humble dish to the level of fine cuisine. Festival-goers had the opportunity to sample the culinary creations of Israel’s celebrity chefs at NIS 35.According to Ismaeel, her Master Chef colleagues showed great enthusiasm in volunteering to participate in the festival. Similarly, all the chefs and hummussiyot owners agreed that the collaborations were an enjoyable experience for all concerned.Master Chef judge Haim Cohen took his role to a whole other level.Working with Hummus Fadi, Cohen prepared two dishes: fish in a delicate tomato sauce to go with Fadi’s creamy white tehina, and a savory lamb ragout served on Fadi’s famous hummus. Hummus Fadi is a hole-inthe- wall joint that has built its reputation solely on its extraordinary hummus and tehina.Faraj, on the other hand, is a restaurant that prides itself on its wide selection of ethnic dishes, in addition to its hummus. Chef Omer Miller brought fish shwarma – one of the specialties of his home restaurant, Hashulhan – to be paired with Faraj’s hummus. Founded in 1933, the restaurant is now run by thirdgeneration proprietor Amir Faraj, who lists his steamed burghul in onion and tomato sauce, as well as majadara, among the dishes frequently ordered by his regular patrons.Like Faraj, the neighboring Star Restaurant is both a large establishment and a family affair, with two generations working side by side in the kitchen. They were joined for one day by chef Avi Levy of Hamotzi in Jerusalem and Chiripom in Tel Aviv.Levy’s contribution to the Star hummus plate was the most exotic of the humussiyot quartet: grilled calves’ tonsils atop a “kumsitz” salad, comprised of garlic confit, onion, lemon and Algerian harissa.Star offers an extensive selection of warm main dishes such as okra in tomato sauce, and one that is not in the Levantine repertoire – kushari, an Egyptian dish that combines lentils, rice and noodles.Hummus Abu Maroun, another hummusiya in the mold of the basic hummus, chips and salad, hosted chef Meir Adoni of Catit fame. Adoni prepared an ambitious dish of lamb shwarma, grilled fat, pullet, stuffed katayef and offal that sold out in three hours. Adoni, a native of the Galil and no stranger to Haifa, having done his military service in the Navy, recommends Abu Maroun’s seasoned French fries.“I personally would like to see more Arab food festivals here,” says Adoni, who asserts that Arab cuisine was a big influence on him. “There is no reason this cannot be duplicated in Ramla-Lod and Yafo.”The four-day A-Sham Festival (A-Sham is the Arab term for the precolonial Levant, which encompasses present-day Lebanon, Syria, Israel- Palestine and Jordan) attracted the participation of 25 restaurants in Haifa’s Ir Tahtit (lower city), a district that is undergoing revitalization and witnessing the opening of new upscale eateries and bars. Festival literature was only in Hebrew and Arabic. Organizers hope that the festival will become an annual event that will attract tourists and expand to include English descriptions.The writer was a guest of the festival in Haifa.Hummus Fadi, 4 Habankim St.Tel: (04) 853-0531 Hummus Faraj, 29 Hameginim Blvd. Tel: (04) 862-1276 Star Restaurant, 19 Hameginim Blvd. Tel: (04) 864-0666 Hummus Abu Maroun, 1 Kibbutz Galuyot St. Tel: (04) 866-4605