Local eight-man-band The Jewish Monkeys bring their own brand of humor and Jewish flavor to their latest album. 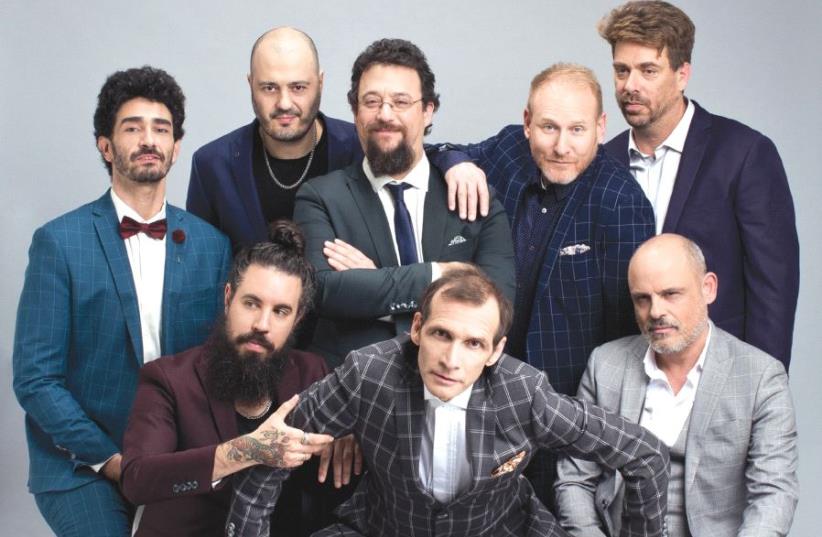 ‘OUR SOUND is more of a blend of all of the places we are coming from. The band is a fusion of our stories; an Israeli salad,’ says Jewish Monkeys accordionist Ran Bagno (front left), seen here with the rest of the band.
(photo credit: MICHAEL TOPYOL)
Advertisement
As the name suggests, the Jewish Monkeys don’t take themselves very seriously. This is not to suggest that they are not seasoned musicians; they simply emphasize the humor and levity of life, and express it through a mix of klezmer, rock and Balkan sounds. You might say they are a perfect mix between Woody Allen’s humor and klezmer on steroids.The Tel Aviv-based eight-man band consists of singers Assaf Pariente, Jossi Reich and Gael Zaidner, Ran Bagno on accordion, Yoli Baum on bass, Henry Vered on drums, Omer Hershman on guitar and Moran Baron on trombone. The Jewish Monkeys have put out two albums so far, Mania Regressia and High Words. The band is preparing for a trip to Germany to record their third album and will be on tour during the spring and summer. Zaidner and Bagno sat down with The Jerusalem Post to discuss their success in Germany, the importance of sarcastic storytelling, and playing a concert at a Syrian refugee camp.How did you guys first get involved with music? Bagno: Music was a part of all my life. My main business is to compose music for performing arts and motion pictures. Music was always part my life. I started playing piano and then got into composing.Zaidner: I was born into a house of music lovers. For most of my life, I was a music consumer. It came out when I was in school and I would bang on books and tables, until I was kicked out. My mother didn’t let me drum. It was a dream that was there all the time, but I never had a proper music education. When I was in my 40s, I finally learned singing and drumming. It was always in me.Bagno: As a band, we started off with a more Balkan/Klezmer sound. Now it became more high energy, more exciting, more rock, more punk. It’s more of a blend of all of the places we are coming from. The band is a fusion of our stories; an Israeli salad.Zaidner: I would like to emphasize that our sound is very Middle Eastern.How did the band get together? Bagno: The story is one of friends that started a long time ago. One of the singers told me that it was a good idea to get together and make music. It was a framework that was very easygoing. We met, we ate, we drank, we played music.About six years ago, we hit a turning point where we decided to go all the way. The band started to work with musicians like Boom Pam. We put out our first album in 2013. We went from something amorphic into something very serious. From the moment we put out that first CD, things started to move naturally. What was surprising is that it happened in Europe. We played at a Jewish festival in Amsterdam, where we didn’t really fit in with the rest of the bands, but someone there heard us and loved us. Now every year, we are invited to Germany. We’re going back to this beautiful studio to record our upcoming third album. We will have shows all summer in Hungary, Italy, and Germany.Why did you choose the name Jewish Monkeys?Zaidner: It was Yossi’s choice. The name was so ridiculous and not very appealing that it was strong. So we went with it. Somehow it also says a lot about our identity in a funny way. It’s very accurate somehow.Bagno: We had three performances that were very emotional. We played for a camp of Syrian refugees. We started to think about our name and whether they would accept us. We felt like sitting targets because of the name. I think everyone was tense; we didn’t know what would happen, going into a refugee camp full of Syrians who were hurt. Would they want us there? But the story ended very nicely. They were dancing and shouting.It was one of those moments that reminds you of why you play music. We did something good for them. We felt that it was a moment of happiness, joy, relief and no boundaries. It was something very apparent that everyone could feel.

Can you talk about your upcoming tour? Bagno: We’ll be playing songs from our first two albums, as well as some Yiddish songs that we only play live. It’s something we carry with us. The songs we choose to sing are the ones we really like.We want to get the best out of the Yiddish.The best in our opinion is the storytelling and the Jewish humor. All of our original songs as well have an emphasis on humor, sarcasm and laughing at taboos. This is what we try to do. Sometimes we do it very well and sometimes we do it okay.Why is it important to laugh at taboos?Bagno: I think it’s the only way to deal with them. We can’t preach about things. If you speak about something with humor, it’s much easier to contain it in my opinion. We are a funny band. We have three singers in the front who are all very strong characters. It’s powerful. The audience is dancing and responding. When we see that, we know that something moved them. Some of our songs have very funny lyrics and we see the audience’s reaction to that. We see that they got the point.How will the sound of your new album compare to the first two? Bagno: We don’t know about the future, but at the moment, we feel that we will have more style. We base everything on a few ideas. Even if we are singing a love song, it needs to have a story. Storytelling is so important. The story must be surprising, ridiculous, macabre or satiric.It has to have a twist. Like if you are a victim of a relationship as a man and there is a strong woman who will pick you up, throw you up into the sky through the window. We have that type of song. We also have songs about politics, but everything is with humor and Jewish flavor.But at the moment, we are in an open process because our dynamics are changing.The important thing is to keep our fingerprints in our project.For more information on the band and their upcoming tour dates, please visit: www.facebook.com/JewishMonkeys.
Advertisement
Subscribe for our daily newsletter