A film director struggles to be a good daughter in ‘Mia Madre’. 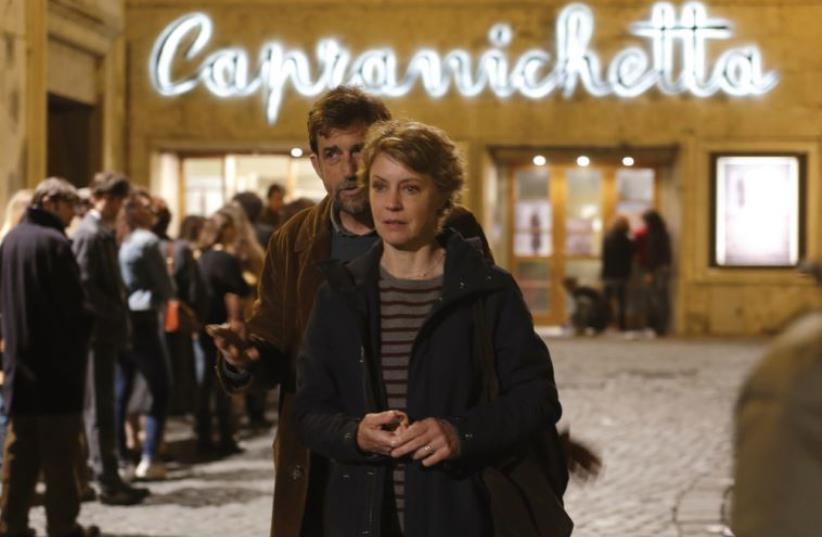 Mia Madre movie review
(photo credit: PR)
Advertisement
Hebrew title: Ima Sheli Directed by Nanni Moretti With John Turturro, Margherita Buy, Nanni Moretti, Giulia Lazzarini Running time: 106 minutes In Italian. Check with theaters for subtitle information.Nanni Moretti is the master of quiet, human moments and low-key comedy-drama. Mia Madre, his latest film, which was the opening-night movie at the Jerusalem Film Festival, doesn’t have the intense drama of his 2001 The Son’s Room , which won the Palme d’Or at the Cannes Film Festival. This new film moves somewhat jarringly between quietly sad scenes and comic set pieces and is buoyed enormously by the energizing presence of John Turturro, who has a key role. Mia Madre is the story of Margherita (Margherita Buy), a film director in Rome who is the middle of making a heavy, socially conscious drama about a strike at a failing factory. But while Margherita works hard at the all- consuming task of filmmaking, she also has to cope with the decline of her mother’s health. Her once commanding, intellectual mother, Ada (Giulia Lazzarini), a Latin teacher who was both nurturing and demanding of her students, now lies in the hospital, getting tests on her heart and lungs that don’t give much hope, and receiving treatments that aren’t very helpful. While Margherita buys food for her mother and tries to keep up with what is going on medically, she feels inadequate compared to her infinitely devoted brother, Giovanni (Nanni Moretti), who brings home-cooked dinners, follows every test her mother undergoes, and even takes a leave of absence from his job to help her more. As the filming progresses and Ada gets more ill, Margherita’s life becomes more complicated. Trying to find some peace and clarity, she breaks up with her lover (Enrico Ianniello), an actor in the movie. But when Barry Huggins (John Turturro), an American movie star, shows up on the set to play the entrepreneur who buys the factory, her professional life begins to spiral out of control. Barry is loud, outrageous, full of himself, entertaining, energetic, charming and infuriating. He forgets his lines more often than he remembers them. Their confrontations — most of which are actually quite funny — begin to drain her. She loses her grip on the movie set just as her mother begins losing her grip on life. Nanni Moretti has said he got the inspiration for this movie when he was filming the delightful comedy Habemus Papam (about a newly appointed pope who freaks out and runs away, hides his identity and starts doing community theater) while his own mother was dying. It’s as if he has split himself into two characters – the brother whom he portrays, who is utterly devoted to his mother, and the sister who is more involved with her work than her family.Margherita Buy infuses her often selfish and casually cruel character with a grace that makes her sympathetic and engaging. But the scenes between Margherita and Ada, while at times very moving, sometimes cross the fine line from the universal to the cliché.Whenever John Turturro came on screen, I was glad because he brings the sometimes muted movie to life. There is a wonderful scene where he dances with a heavy-set crew member on his birthday in a dance that will remind viewers of his Jesus Quintana bowling dance-strut in The Big Lebowski . The scenes of him flubbing his lines recall some classic movie-making scenes, notably Francois Truffaut’s Day for Night . The director who is losing his grip on his personal life is a familiar theme, although Margherita’s problems are very different from the director in Fellini’s classic 8 1/2 , the most famous film about a movie director falling apart.Some of the themes in the movie, especially Margherita’s selfishness and her cluelessness about it, are resolved a little too neatly. The complex relationship between the ailing mother and the busy daughter is refreshingly open-ended, though. Moretti is good at exploring the contradictions in the relationship, with well-observed moments and absolutely no psychobabble. The performances by all the actors are wonderful, with Buy, Turturro and Lazzarini as the standouts. In the end, Mia Madre is a moving, if occasionally predictable, low-key movie, filled with Moretti’s trademark humor and quirky observations on human nature.