‘Lolo’ is an unfunny comedy with two charming actors. 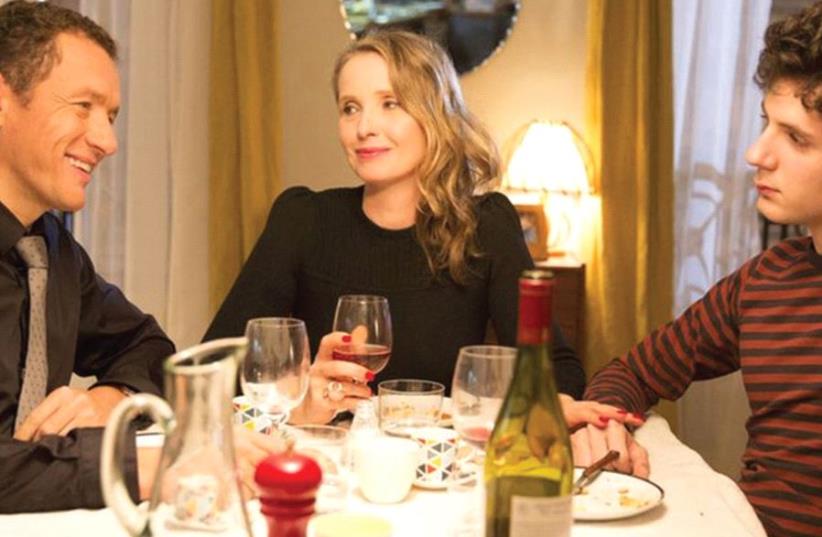 A scene from the French film Lolo
(photo credit: PR)
Advertisement
LOLO
Directed by Julie Delpy
With Dany Boon, Julie Delpy, Vincent Lacoste
Running time: 99 minutes
In French.
Check with theaters for subtitle information.Julie Delpy started her career as a beautiful French starlet and, like most starlets, she could have vanished from the screen in the time it takes for the ink to dry on a copy of Vogue. But she proved herself, in movies such as Richard Linklater’s trilogy (Before Sunrise, Before Sunset, Before Midnight), to be a real actress. In recent years, she has moved into writing and directing and has cultivated a kind of female Woody Allen voice, notably in the funny and charming rocky-relationship films 2 Days in Paris and 2 Days in New York.She has shown so much talent in so many realms that I had high expectations for her latest film, Lolo. But while the movie has some enjoyable moments, it’s disappointingly ill conceived and a sour excuse for a romantic comedy.She stars in it, as she has in her other films, and her lovely, slightly ditzy comic presence is one of the movie’s saving graces. But she and her co-star, Dany Boon, are defeated by a script that doesn’t ring true.Delpy plays Violette, an editor at a French fashion magazine and divorced mother of a 20-year-old son, Lolo (Vincent Lacoste), who still lives at home. Lolo is cool and confident, an aspiring artist, who seems totally relaxed about how disorganized his mother is, and nonchalant about all the men she brings into his life.When Violette goes on a spa vacation with her best girlfriend, Ariane (Karin Viard), she talks about how she despairs of ever finding a man. But since this is a romantic comedy, she finds one in the next scene, at a barbecue that she and Ariane are invited to. The man she meets is Jean- Rene (Boon), whom she perceives as a hick and a nerd — he’s from Biarritz, although he’s moving to Paris — and he works in IT, definitely not her usual kind of guy.But they start an affair, and she discovers he is good in bed; so good that she keeps seeing him even after she returns to Paris, where he is moving into a new building in a very un-chic neighborhood. She is conflicted about whether he is interesting and cultured enough for her to be serious about, but she worries even more about how Lolo will react to him. Lolo seems like a brash, spoiled kid who enjoys having his mother all to himself, but that’s about it. Soon, though, it turns out that Lolo keeps a detailed journal of how he hates his mother’s boyfriends and has driven them all away. It’s the journal of a complete psycho, although Lolo, who dates models and always has a bored smirk on his face, seems to be a basically normal guy, if a bit entitled.Lolo then embarks on a complex, carefully engineered campaign to ruin Jean-Rene’s life and his relationship with Violette.He does everything from picking out the wrong jacket for Jean-Rene to wear to a fashion-industry event Violette is running, to putting itching powder in his clothes, to drugging him, hacking his laptop and ruining his work, etc. Violette, who is neurotic, with a streak of hypochondria, doesn’t help much as she frets about each misfortune that befalls Jean-Rene, not knowing her son is behind it all.Boon is a likable actor, and his character may lack panache but is an honest, good-hearted man. To see someone like him tormented and humiliated may be someone’s idea of fun, but it isn’t mine. The character of Lolo, the devil spawn, is oddly conceived. His passionate wish to destroy his mother’s boyfriends seems to come out of nowhere, and it seems odd that, at his age, he would care so much, especially since he is a wellconnected artist surrounded by attractive young women.Perhaps Delpy and Boon are so popular in France that audiences will go to see them in an improbable rom-com with a tired premise; but even if you are a fan, you won’t enjoy them in this movie.