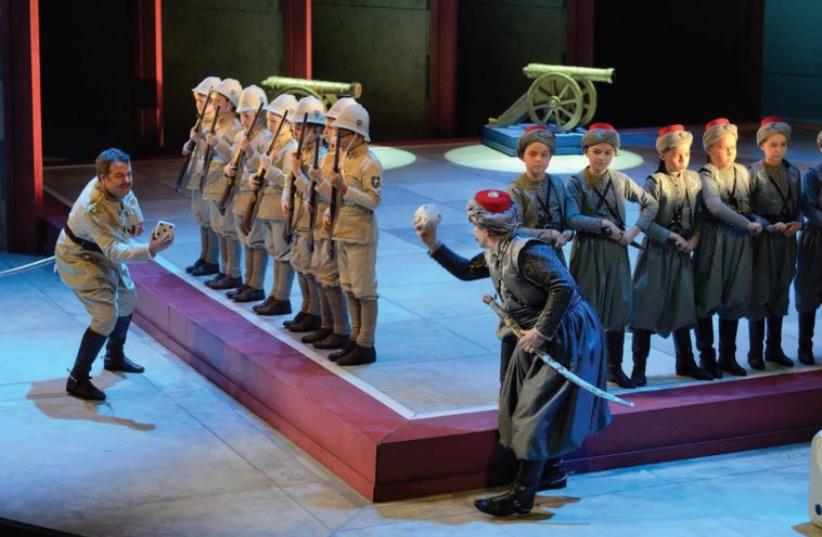 The Estonian National Opera Boys’ Choir.
(photo credit: YACHATZ)
Advertisement
It is thanks to the Estonian National Opera, performing at the Israel Opera, that the local audience was privileged to enjoy, at long last, one of Handel’s too-often neglected and forgotten operas – Rinaldo.There is no human frailty that Handel missed in his operas – love, hate, joy, despair, jealousy, revenge, devotion or anger – in their most intense and communicative expression, straightforward and without commonplace Baroque pomp and circumstances.It was a splendid performance, doing full justice to Handel’s masterpiece. The stage direction of England’s William Relton and the sets of England’s Cordelia Chisholm were tastefully abstract and minimalist, without crowding the stage with superfluous items, and functioning pointedly as triggers for the spectator’s imagination.The cast was superb. In the title role, Monika-Evelin Liiv made her impressive voice sound like a veritable heldentenor.As Goffredo, Oliver Kuusik was convincingly authoritative. Helen Lokuta’s soft, gentle voice, as Almirena, made one understand why Rinaldo fell in love with her. Her profoundly moving aria “Lascia Ch’io Pianga” (Let Me Weep) was one of the performance’s highlights. In the role of Armida, Helen Lepalaan was just as intensely expressive in her grief aria as she was forcefully furious and frightening in her rage. All the singers’ breakneck coloraturas were breathtaking in their effortless flexibility – the male singers’ no less than the ladies’.Conducted by Andres Mustonen, the Estonian National Opera Orchestra adopted brisk, refreshing tempi, avoiding the pompousness often associated with Baroque music. Its coordination with the singers was perfect, often resulting in a dialogue of orchestra and voice.Now that Handel has fortunately had his local premiere at the Israeli Opera, one hopes that more of his fascinating operas will be performed here in the not too distant future.