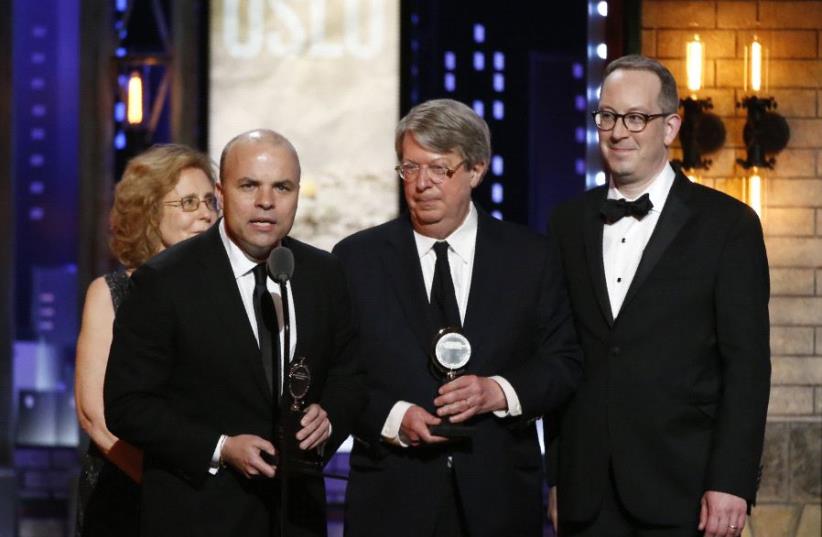 J.T. Rogers (L) accepts Best Play for "Oslo" at the 71st Tony Awards, June 11 2017.
(photo credit: REUTERS/CARLO ALLEGRI)
Advertisement
Israeli diplomat Uri Savir won a coveted Tony Award in New York City on Sunday night. Well, it was Michael Aronov who took the prize for best featured actor for playing Savir in the show Oslo, in a night where Jews and Jewish- and Israeli-themed shows and stars took center stage.Oslo, the show about the 1993 Israeli-Palestinian peace talks, also took the Best Play award at the Tonys, the annual Broadway awards. The show follows the little-known story of the integral role a Norwegian couple played in getting the Israelis and Palestinians to the negotiating table.While the play focuses on Norwegian diplomat Mona Juul and her husband, Terje Rod- Larsen, there are plenty of supporting characters that take the stage, including Savir, the Israeli negotiator, deputy foreign minister Yossi Beilin and even an appearance by Shimon Peres.The play closes on Broadway this week, and will premiere in London in September. While Oslo took the top prize, it lost out on many of its other nominations, including best actor, best actress and best direction.“The ladies and gentlemen who believed in democracy, who believed in peace, who believed in seeing their enemies as humans, I give this up to you,” said Oslo playwright J.T. Rogers, while accepting the award.Speaking to The Jerusalem Post in April, when Oslo hit the Broadway stage, Savir said he’d spoken with Aronov, who’d asked for some tips on authenticity. He said he was happy to see the show’s success, as “it puts a very positive spin for a New York audience on Oslo.”Oslo beat out Indecent, a show about a controversial Yiddish play from 1907 which featured a lesbian romance, for the Best Play prize. But Rebecca Taichman did win for Best Direction for Indecent; the show also won for Best Lighting.

Taichman appeared shocked at her unexpected win, and took several tries to get out her speech.“It’s a story about love in a perilous time, and speaking out and making art when one is at great danger,” she said on stage.The big winner of the night was undoubtedly Dear Evan Hansen, which took home six prizes, including Best Musical. The show also won for its book, score, orchestrations and featured actress. The show’s star, 23-year-old Ben Platt, took home the Best Actor award, and gave an emotional speech on staying true to yourself.“Don’t waste any time trying to be anybody but yourself,” he said, “because the things that make you strange are the things that make you powerful.” Platt grew up in a Jewish family in Los Angeles and attended Camp Ramah as a child. In an appearance last year on Late Night with Seth Meyers, Platt discussed his Jewish upbringing and even sang a little show tune in Hebrew. At the camp, Platt explained, “we do all of our productions there in Hebrew.”After talking about his family performing at bar mitzvas, weddings, High Holidays, parties, “Yom Kippur, things like that,” Platt treated Meyers to a couple lines from “Luck Be a Lady” from Guys and Dolls: “Hey lady, tni li mazal.”Platt’s father, film producer Marc Platt, is actually slated to adapt Oslo for the silver screen; he was behind La La Land and Legally Blonde, among many others.One of the biggest stars of the night was none other than legendary Jewish diva Bette Midler. Midler took home the award for Best Actress in a Musical for her role in Hello Dolly! She resisted efforts to play her off the stage during her speech: “Shut that crap off!” she shouted at the music. 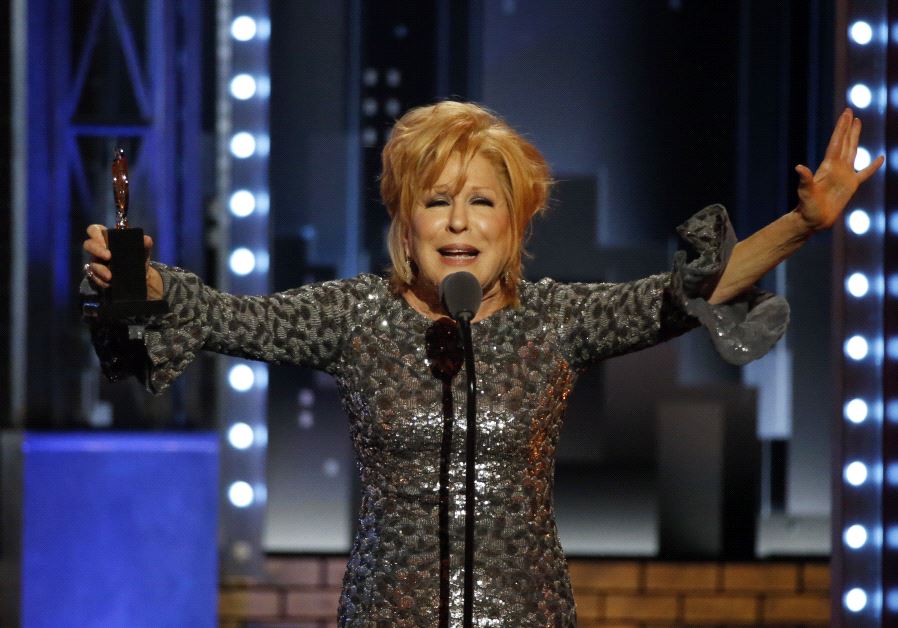 The evening was hosted by actor Kevin Spacey, best known currently for his role in House of Cards. Spacey, a former Tony winner, kept the evening lively with a variety of musical numbers, and stayed largely away from the political humor that has dominated many recent awards shows.Actors Cynthia Nixon, Kevin Kline and Laurie Metcalf all won Tonys for performances in plays. Gavin Creel won best featured actor in a musical and August Wilson’s Jitney won best revival of a play.Christopher Ashley took home the best director award for a musical for Come From Away, about a small town in Newfoundland, Canada, that took in the passengers of 38 airplanes diverted on 9/11. One of the characters in the musical is a rabbi, who helps arrange kosher food, and meets with a local Holocaust survivor, one of the only Jews in the small town. The pair sing Kaddish together on stage as everyone reels from the horrific news of the terrorist attacks.“I’d like to accept this on behalf of the people of Newfoundland and all of the first responders and their families in New York on 9/11,” said Ashley. “The people who gave their lives and the people who extended their hearts and their homes and were generous and kind at the very worst moments.”Reuters and JTA contributed to this report.