“It’s all about love, folks,” Williams said as his nearly two-hour concert drew to a close. 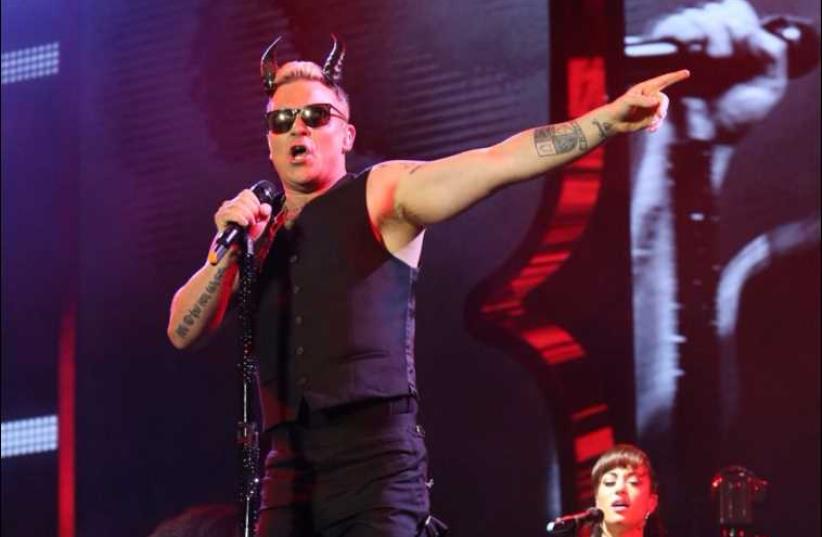 Robbie Williams performs in Park Hayarkon
(photo credit: DAVID BRINN)
Advertisement
Everyone must grow up at some point.Even Robbie Williams.For anyone who followed the pop star’s career for the past two decades (and if you lived anywhere outside the United States, chances are you did), it is almost impossible to envision the singer sitting on a stool, guitar in hand, performing a quiet rendition of “Twinkle Twinkle Little Star” to his young infant daughter.And yet Williams did just that on Saturday night in Park Hayarkon as some 40,000 fans looked on.Sure, he opened his set wearing a pair of devil horns. And his many tattoos, acquired throughout his storied life, were prominent for all to see. And, yes, he donned a kilt for the second half of his show and, of course, couldn’t resist giving the crowd a little glimpse of what was underneath (tight black briefs with a tiger on the front, if you’re curious).Williams’ antics, though, are just proof that old habits die hard.By his own admission, Williams has been through a lot.“I got really fat, then I got thin, then fat again, and then rehab, then skinny, then rehab again...,” he chuckled, as he ruefully condensed his much publicized battle with drugs and depression.His music reflects that arduous journey in the most honest way a pop song can. When Williams sings, “I got too much life/Running through my veins/Going to waste/I don’t wanna die/But I ain’t keen on living either,” it is clear that those lyrics come from a real place.His touching performance of “Better Man” – sung as a duet with his father, Peter, in tow – is the epitome of his ongoing quest for redemption.However, Tel Aviv still managed to bring the dormant bad boy out of him.“Tel Aviv, for the next two hours I will own your ass,” Williams roared after his 1997 hit “Let Me Entertain You.”And entertain us he did.The 41-year-old pop star showed no signs of fatigue as he sauntered confidently across the stage. It was almost as if, had producers decided to tack on another hour to the set at the last minute, his response would have been an unequivocal “bring it on.”His enthusiasm, perhaps, could be attributed to performing in a new place that clearly loved every minute of his act.Professing his love for Israel (and especially its women), the singer declared that he plans to tell his friends that his visit was “f**king amazing.”“It’s all about love, folks,” Williams said as his nearly two-hour concert drew to a close.“I’ve always wanted to visit Israel and to see you and feel you, and I think now I have,” he said, as hundreds of blue and white balloons floated through a positively giddy crowd of 30-40-year-olds who spent decades humming along to the vast array of Williams’ chart-topping hits.Nobody tells Robbie Williams what to do. And, on Saturday night, Williams gave the entire BDS movement his middle finger.Roger Waters would not be pleased.Or, his enthusiasm could have been because of the marijuana. Taking a break from a song, he couldn’t resist commenting on the inescapable stench emanating from the audience.“Someone is smoking so much weed,” he chuckled in between hits, “I don’t do that anymore, but that smells nice!” As for his set list, Williams managed to cram every notable hit on his resume, as well as a few famous songs from other artists.There was “Rock DJ,” “No Regrets,” and “Bodies,” of course, but if an electrifying mashup of Queen’s “We Will Rock You” and Joan Jett & the Blackhearts’ “I Love Rock and Roll” is your thing, well, you were in luck, because Williams belted out those hits as well.Rather than seeming reductive, the covers added an extra dimension of excitement to what was already a lively evening. Seeing the legendary star sing old hits like the Isley Brothers’ “Shout” and 17-year-old Lorde’s hit “Royals” on the same night demonstrated that this is a guy who knows how to perform – era and genre restrictions be damned.And what of the set itself? Sure, the ever-changing design that morphed from a fire and brimstone motif to a 1950s jukebox was creative and enhanced his performance. And the three buxom backup dancers were talented and perhaps lent a touch of definition to some of Williams’ songs.But he didn’t need any of it.Much like his idols Mick Jagger and Frank Sinatra, Williams possesses an indefinable charisma and the insatiable yearning to please an audience.When Williams asked the crowd if he should come back, the answer was a loud and resounding “yes!” Hopefully then, while this is Williams’ first time in the Holy Land, it’s not his last.