The Sheraton Tel Aviv is hosting a special culinary festival. 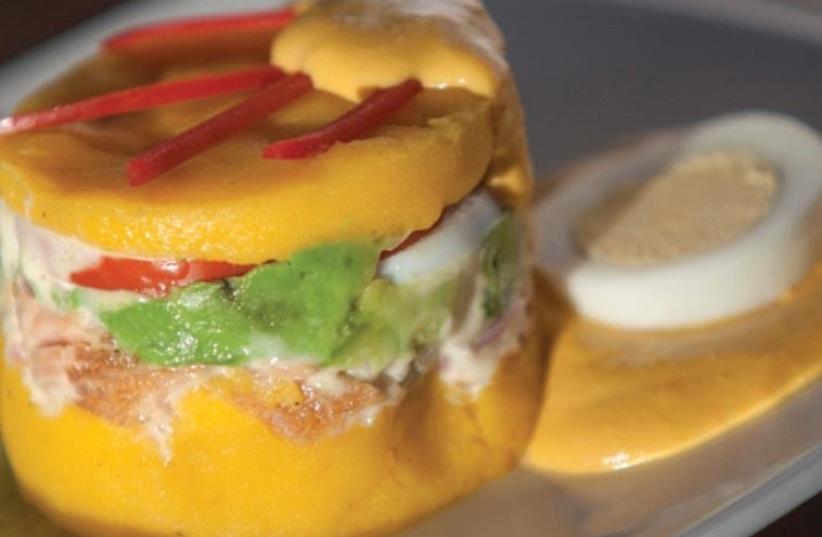 Olive Leaf Restaurant
(photo credit: PR)
Advertisement
Israel and Peru have had diplomatic relations since 1957 and the South American country is a popular holiday destination, but how much do Israelis know about Peruvian food? To rectify this gap in our general education, the Tel Aviv Sheraton is holding a Peruvian culinary festival, partnering with the Peruvian embassy to show what the cuisine is all about.To launch the festival, the Sheraton management held a special dinner in the hotel’s signature restaurant, the Olive Leaf. Guest chefs Peitro Luis Ricse Campos and Hans Balvin Sierra were brought over from the Lima Sheraton. Peruvian ambassador H.E.Gustavo Otero was also in attendance.Peruvian cuisine has both indigenous and immigrant influences. European and Asian food have both made their contribution to what Peruvians routinely eat, so it can be considered a fusion cuisine of all these elements.Ceviche – today a must in upmarket restaurants – is practically a staple in Peru. Quinoa, the oh-so-trendy grain, has been eaten in Peru for centuries.After a reception, we sat down to beautifully laid tables, complete with flower arrangements that consisted of a bird of paradise surrounded by some very beautiful vegetables such as chestnut squash and bright red chili peppers.There were two starters so that we could get an idea of the variety offered in Peruvian cuisine.The first consisted of small wooden skewers threaded with chunks of beef tenderloin, served with what turned out to be a ubiquitous element in the Peruvian kitchen – pieces of corn on the cob which had been roasted and sliced thin. The meat was highly spiced, with several different flavors – I detected cumin as one of the spices – and was wonderfully tender. Small halved new potatoes also came with the dish, and the chili sauce was as hot as one would expect.The second starter was the famous ceviche – pieces of raw fish, marinated in lime juice and herbs, with an accompaniment of glazed sweet potato and more corn. The white fish – our waiter surmised it was cod – was delicious but overly generous. There is only so much raw fish one can absorb, although the fresh slices of olive bread made a perfect partner for the dish.For the main course, we were treated to lamb chops. Once again, the meat was quite rare but very soft. The side dishes were Peruvian loche squash, a bright orange variety that had been mashed, and a helping of creamed quinoa. A peppery red sauce added to the colorful plateful.During the entire meal, our wine glasses were frequently filled by the attentive staff. The Flam 2014 red blend – Merlot, Cabernet Sauvignon and Cabernet Franc – was a perfect accompaniment to the hearty food.Unfortunately, the dessert was something of a letdown. It consisted of fried beignets (doughnuts), which tasted dry and overdone. The mango sorbet and piquant quince sauce, however, were excellent and almost compensated for the doughnuts.For diners who have a natural curiosity about cuisines other than our own, a visit to the Sheraton’s Olive Leaf in the coming week will provide a gastronomic experience that is different, exotic and something to remember.The writer was a guest of the restaurant.Olive Leaf Restaurant Kosher Sheraton Hotel 115 Hayarkon St., Tel Aviv Weekdays 12:30 p.m. to 3 p.m.; and 7 p.m. to 10:30 p.m.Tel: (03) 521-9300