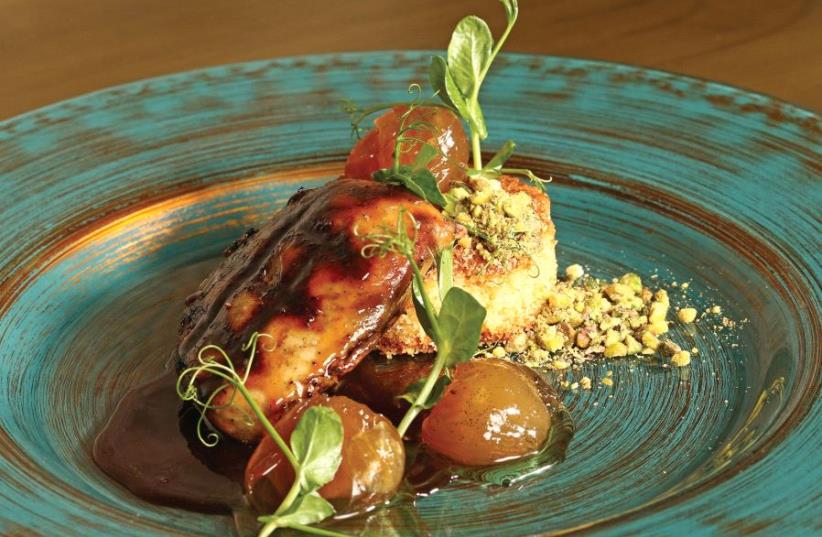 Jacko’s Street
(photo credit: PR)
Advertisement
If eating at a restaurant was just about the food, then I don’t think the restaurant industry would survive. A dining experience is not just about the food but rather the whole experience, including the service and the ambience. Many restaurants in Israel fail by not considering the experience they offer diners.Jacko’s Street opened four years ago in Jerusalem and was the first kosher chef restaurant in the Mahaneh Yehuda market area. As the small streets around the shuk started to fill with more and more eating options, the popularity of Jacko’s also grew. In my opinion, the success of Jacko’s Street is due to its understanding that it is important to offer people more than just great food.“With only 55 seats in the original restaurant, on busy nights we sometimes had a wait list of 100 people,” says chef Zakai Huja, who established the restaurant with childhood friends Rafi Revivo and Yotam Nissim. “I also felt limited by the small size of the kitchen and wanted more space to be able to expand the menu.”It took the trio some time to find a new location, as they were determined to stay in the shuk area. They then spent a year renovating the new space, working with Studio Opa which had designed the original restaurant, as well as other well-known places such as Station 9, Hasadna and Waffle Factory, which Revivo and Nissim also own.When I heard that Jacko’s was moving from Hashikma Street to Agrippas, I was worried that it would lose some of the elements that made it special, but to my joy, the food and experience have only got better. The new restaurant can seat 140 people and on average serves 200 people on a week night and 300 on the weekend. The new open-plan kitchen is the same size as the entire old restaurant and has allowed Huja to install a Mibrasa charcoal oven, as well as other stateof- the-art cooking equipment for a more diverse menu. He still goes to the shuk every morning to select his seasonal produce and get inspiration for new dishes.Jacko’s has a unique ability to appeal to many different audiences. In the early evening, the restaurant is busy with an older English-speaking clientele. As the night goes on, the lights dim, the music turns up, and the Israelis come looking for more of a party atmosphere while they dine, especially those sitting around the bar. There are plenty of tables for large groups in the main restaurant and in the large mezzanine area.The menu is constantly changing, but some of the old favorites remain. The asado bruschetta (NIS 66) is still the most popular starter, although it has been tweaked slightly. There are also some creative new additions like the red tuna fricassee (NIS 64), which is an upscale version of the traditional Tunisian sandwich made with raw red tuna. Each mouthful was a delight, even if it was a bit messy to eat.Another new favorite I sampled was the fish bruschetta (NIS 60), served with avocado cream, saffron aioli and seasonal fruit, which gave the dish a wonderful kick. For a rich indulgent dish, the goose liver with a semolina cake (NIS 88) fit the bill, and the lady salad (NIS 54) was a perfect as a lighter starter.The charred steak (NIS 146) served with chimichurri, garlic and char grilled vegetables and potatoes was without question our favorite main course. However, the juicy prime beef hamburger (NIS 78) was a close second and, in my opinion, the best gourmet burger in Jerusalem. I also really enjoyed the goose breast focaccia (NIS 96), which was succulent and had a sweet date honey glaze.We were lucky to try a special fish dish that the chef was testing. The Dutch red mullet with crispy gnocchi (NIS 78) was a sophisticated take on fish and chips, with a wonderful light batter and tangy lemon flavor. I would be happy to see this added to the menu in the future.The dessert menu varies slightly every night, but the chocolate dessert (NIS 46) is always a big hit, as well as the Pachzani Zacki, a large profiterole filled with ice cream served with toffee cream and nuts (NIS 46). Both are very impressive parve desserts.As well as an extensive wine menu, Jacko’s offers some unique Middle Eastern style cocktails such as The Original Camel (NIS 44) made with Bacardi, raw tahini, Rosetta, coconut and pineapple juice; and Ahlan Wa Sahlan (NIS 42) with arak, Rosetta, mint and lemon. The bar staff also makes a great gin and tonic with a thin slice of cucumber.The new menu also includes vegetarian and gluten-free options, and the kitchen is very understanding when it comes to food allergies and intolerances. Jacko’s also offers a seven-course tasting menu (NIS 300 per person). Advance booking is required for a whole table.The writer was a guest of the restaurant.Jacko’s Street Kosher 74 Agrippas, Jerusalem Tel: (02) 581-7178 Sunday – Thursday, 6 p.m. to last customer Saturday, an hour after Shabbat until last customer