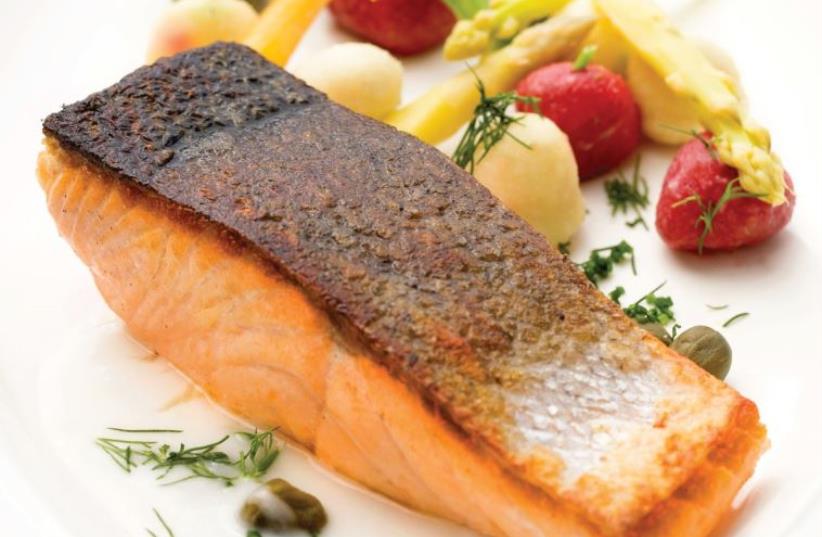 Chloely’s restaurant
(photo credit: PR)
Advertisement
There’s very good news for people who eat only kosher food. Celebrity chef Victor Gloger has risen to the challenge and opened his prestigious Chloely’s restaurant in the Tel Aviv Hilton, replacing the King Solomon, which has closed its doors after 50 years.Gloger has established himself as one of Israel’s most creative and original chefs. The Argentinean immigrant opened his non-kosher Chloely’s, named for his two daughters, 10 years ago in Ramat Gan, and it has been a byword for good, original food ever since.The chef considers his transformation into a kosher chef as a serious challenge.“It seems like an impossibility to combine Chloely’s signature creativity with the demands of kashrut,” says Gloger, “but I feel sure the general public will agree with me that we have achieved the impossible.”Having been invited by the hotel to report on the new restaurant, I and my dining companion settled down to what we anticipated would be an outstanding meal. The small restaurant, which can accommodate 50 diners, seemed full of helpful staff waiting for us as we sat down at a comfortable table for two laid with pristine white linen and good-quality flatware and china – no paper napkins here or clumsy pottery.Dried flower arrangements, a thick wall-to-wall carpet and soft lighting all contributed to the luxurious atmosphere, and the low ceiling added to the warm intimacy of the place.Two glasses of champagne appeared as if by magic to set the mood. Pre-dinner nibbles included wonderful grainy whole wheat bread studded with sultanas and nuts to dip into creamy tehina and top-quality green olive oil.We ordered our starters, which arrived with hardly any waiting time.I chose a Gloger classic dish, a carpaccio of sea bass, sliced paper thin and garnished with lemon juice, tomato seeds – the part some cooks discard – and smoked black aubergine paste ($17). This was a perfect opener, just substantial enough without being overpowering.The fish was so fresh, it was even a little too bland and could have been more spiced.My companion ordered the foie gras – a solid chunk of paté, nicely pink and marbled, very livery, which came with a marvelous orange marmalade on a silver spoon ($27).Gloger, who happened to pass by our table at this point, revealed the secret of the marmalade.“It’s made with the first crop of oranges, when they are still a little sour,” he confided.It went very well with the paté but would have been even better on (parve) buttered toast.After a suitable pause to sip the Trio Secret 2012 blend of Cabernet and Merlot and enjoy the atmosphere of genteel good dining, the main courses appeared.My choice was a sea bream fillet, very lightly grilled and topped with garlic, sun-dried tomatoes and black olives ($52). I had to add salt and a squeeze of lemon, which was fine. It was a delicious dish and a very generous portion. On the side were sliced roasted potatoes and a separate helping of roasted vegetables, which were good but could have been less oily.My companion was more than happy with his lamb chops ($72), which were crispy and tender while being quite rare inside. He said the ratio of meat to bone was exceptional. And indeed, at the end very few small bones remained. A courgette (zucchini) half stuffed with chopped meat accompanied the lamb, as well as some braised potatoes and onions.For dessert we chose two items: a chocolate dacquoise, hazelnut praline mousse with chocolate whipped cream and halva sorbet, and a caramelized lemon semi-freddo with strawberry sorbet. Both were superb, beautifully presented and not overly sweet.We ended our meal with mint tea served in glass tea pots and glass cups – very aesthetic and a great end to a great meal.Welcome to the Hilton, chef Victor Gloger.The writer was a guest of the restaurant.Tel Aviv Hilton Hotel
Kosher
Hayarkon Street, Tel Aviv
Tel: (03) 520-2023
Sunday to Thursday, 7 p.m. to 10:30 p.m.