The Wine Bar in the King David Hotel has an impressive selection. 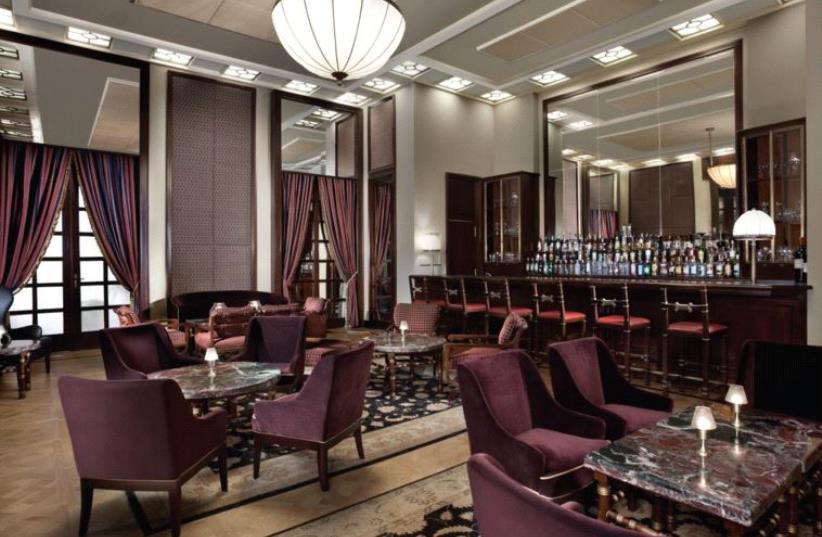 The Wine Bar
(photo credit: PR)
Advertisement
There is no question that the setting and the décor of the King David Hotel is regal.Simply walking through the lobby of the hotel to get to The Wine Bar is an elegant journey. Set off the main hotel lobby with similar décor and lighting, the bar still has a very hotel lobby feel to it.The choice of wine on the menu is impressive. What is particularly special is the selection of excellent wines available by the glass – a selection that is updated regularly.As well as simply ordering a glass or bottle of wine, there is a selection of wine tastings (Duo NIS 59, Trio NIS 87 and Quattro NIS 111 for 100 ml. glasses of each wine). We opted for the Quattro of both white and red wines.Of the four white wines we tried, we particularly liked the C du Castel, Domaine du Castel 2014, which is one of my favorite wineries.We were disappointed by the Cabernet Sauvignon, Montefiore and the Mare Nostrum, Maia but really enjoyed the Wild Carignan, Recanati 2013, which paired very well with the cheese platter. Our clear favorite was the Cabernet Sauvignon Reserve, Flam 2013, which is full bodied and delicious to drink even with a light meal.The food menu is a selection of tapas, which are mostly miniversions of the dishes on the main lobby menu. While we enjoyed some of the dishes more than others, we felt that the menu needed to be more tailored to the wine bar atmosphere.Our favorite dish was the cheese platter (NIS 55), which was a selection of four cheeses.Although the menu said marmalade, we received an overly sweet raspberry jam that didn’t go well with the cheeses. We would have preferred a tomato relish or the orange marmalade (as listed on the menu). The menu could benefit from a larger selection of cheese dishes, which pair so well with wine.Both the fish (NIS 25) and the vegetable bruschetta (NIS 20) were tasty and were served on beautifully crispy bread.The highlight of our meal was definitely the desserts. Although The Wine Bar menu does not include desserts, there is the option to order them from the main lobby menu.Our waitress brought us a selection of traditional French cream cakes.Our favorites were the mille feuille (NIS 23) and the chocolate tonka, but we also enjoyed the selection of petit fours she arranged for us, which included some excellent macarons (NIS 7), pralines (NIS 6) and whisky truffles (NIS 7).We also enjoyed a glass of Limited Edition 1/11,000, Tavor 2012 (NIS 240/bottle), made from Cabernet Sauvignon grapes from the Upper Galilee, which went very well with our desserts The Wine Bar at the King David Hotel is potentially a great addition to the Jerusalem bar scene.The writer was a guest of the restaurant.The Wine Bar KosherKing David Hotel 23 King David St., Jerusalem Tel: (02) 620-8784 Sunday to Thursday, 5 p.m. to 12:30 a.m.