Rolling out the magic carpet 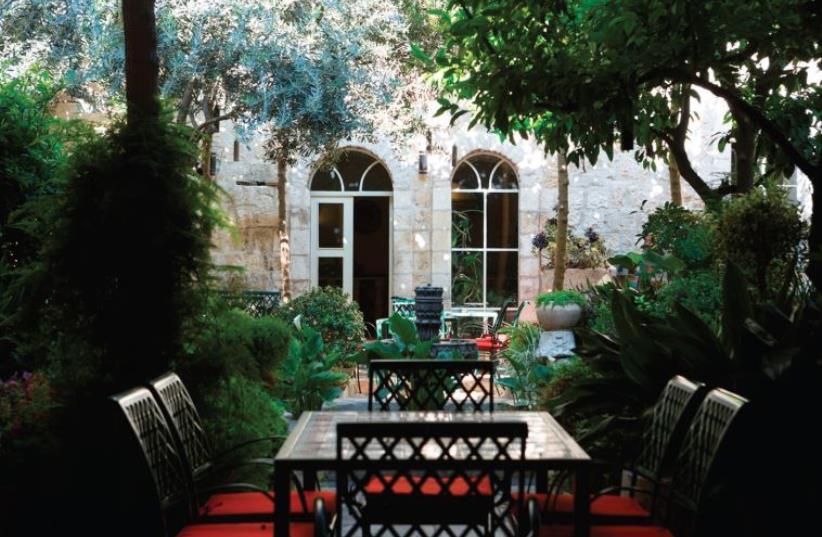 The American Colony Hotel
(photo credit: PR)
Advertisement
It’s not difficult to play tourist in Jerusalem, but it is a rare thing to feel completely transported to another time and place. The American Colony Hotel, the former residence of a 19th-century Ottoman pasha, is a Jerusalem institution for precisely that reason. Romancing the visitor with the building’s Arabic arches, oasis-like dining area and its rich history, this getaway is deeply embedded in the Jerusalem story.Every Friday evening during the summer months, the staff of the hotel invites Jerusalemites, as well as tourists, to enjoy their Arabian nights, a celebration of Arabic dishes – accompanied by an oud player – in the hotel’s iconic setting.Hotel manager Thomas Brugnatelli says that if you want to eat good local Arabic food, the American Colony Hotel is the destination.“Locals kept asking for our homemade shwarma,” Brugnatelli says of the inspiration for the dinners.While the hotel is most known for its big Saturday buffets, Brugnatelli says, they wanted to offer tourists and locals an attraction on Friday nights. When one walks into the dining room, the air is filled with the scent of cinnamon and cardamom.The first stop on the buffet line, and the star of the show, is shwarma, which a porter shaves for diners. It’s either fitted snugly into a fresh pita or taboon bread or served on a plate with a dollop of lemon-infused tahini. Chef David Dids explains that the secret to the hotel’s signature dish comes from the cut of meat and the marinade.“We take a big chunk of top veal, rub it with the lamb fat, then slice it and marinate it,” explains Dids, who has been with the hotel for 20 years. “We use oriental spices – cinnamon, curry, cardamom – vinegar and salt. We marinate the meat for at least 24 hours, then mount it on a spit.”The result is a surprisingly original take on a staple street food. The edges are crispy, while the meat is tender. The flavors are salty, fatty and spicy; the meat is juicy and aromatic.But while the shwarma may be the star of the evening, diners are spoiled for choice when it comes to vegetables, fish, poultry and meat. There is an ample selection of Arabic salads, which include variations of baba ganoush, fattoush, artichokes, smoked salmon, cucumbers in yogurt sauce, tabouleh salad and grilled zucchini.The main platters include vegetables stuffed with rice, Moroccan salmon, Arabic rice cooked with blanched almonds and dried fruit and a selection of chicken and meat kabobs.“All the food is influenced by Jerusalem,” says Dids. “We have Jews from Morocco and Algeria, Palestinians from Syria and Lebanon.”While it’s difficult to save room for dessert, all manner of filo-dough, pistachio and sugary semolina delicacies are on offer. But the winner has to be Umm Ali, a classic Egyptian take on bread pudding. When I tell Dids that I enjoyed this dish most of all, he rolls his eyes in amusement. “It’s the easiest thing to make!” Using leftover croissants and danishes from the breakfast buffet, the kitchen staff at the American Colony mix extra sugar and cream, bake them for about 30 minutes and then allow everyone to enjoy. The result is nothing less than a comfort food sure to clog your arteries, but one that will put a smile on your face.The meal’s price tag, NIS 195, may threaten to wipe that smile away, but with all the food on offer and the exquisite location, it’s actually a great deal. Brugnatelli likes to spin it like this: “The price of the menu is attractive. It’s expensive compared to other places but accessible to people coming from outside of the hotel.”And put all together: a large and expansive menu, the historical setting of the hotel and, weather permitting, a cool, clear night, it is well worth the price.The American Colony Hotel is the former residence of the Ottoman pasha Rabbah Dapd Amon Effendi al-Husseini. After his death in 1895, a community of Christians bought the home, keeping it as a residence and offering it as a guest house. It officially became a hotel in 1902.The hotel harks back to the hey-day of Ottoman grandeur, complementing the Arabic arches and architecture with heavy, highquality, Middle Eastern carpets and an open-air garden and koi fish pond. The hotel has displays of thousand-year-old artifacts, and the walls are adorned with early 20th-century photographs of Jerusalem.In Jerusalem, it’s easy to get caught up in the drama and tensions of the every day, yet it’s so unique and rare to feel a sense of escape as is felt in the American Colony Hotel.The writer was a guest of the hotel.American Colony Hotel Not kosher 1 Louis Vincent St., Jerusalem Tel: (02) 627-9777