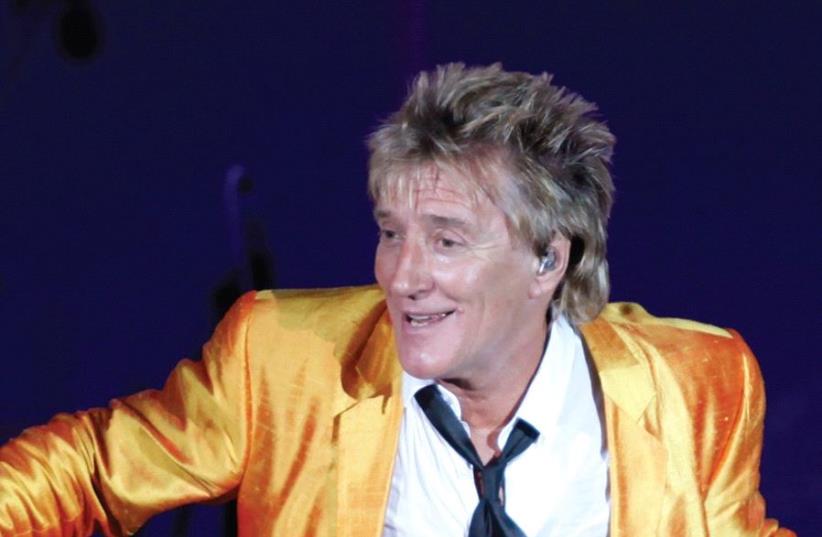 British singer Rod Stewart performs during his concert in Floriana
(photo credit: REUTERS)
Advertisement
It was the golden throat that defined an era. There was a time when nobody could touch Rod Stewart as a rock & roll vocalist – not Jagger, Daltrey or Lennon.His seminal bluesy work with The Jeff Beck Group in the late 1960s paved the way for an astounding, simultaneous one-two punch of rootsy solo albums like Gasoline Alley and Every Picture Tells a Story and rollicking swagger and roll as the ebullient front man of The Faces, one of the most under-appreciated British rock bands of the early 1970s.“A teller of tall tales and honest heart breaker, he had an unmatched eye for the tiny details around which lives turn, shatter, and reform – and a voice to make those details indelible,” wrote Rolling Stone magazine in 1980.“His solo albums were defined by two special qualities: warmth, which was redemptive, and modesty, which was liberating. If ever any rocker chose the role of everyman and lived up to it, it was Rod Stewart.”Self-penned songs such as “Mandolin Wind” and revelatory interpretation of other writers (“Handbag and Gladrags” and “Reason to Believe” come to mind) were sterling examples of that everyman role, but so was the breakneck, out-of-control quality of The Faces’ “Stay with Me” and the pub camaraderie of “Had Me a Real Good Time.”By the mid-1970s, Stewart’s voice was still every bit as endearing; but with The Faces broken up, his guitar-playing partner in crime Ronnie Wood hijacked by The Rolling Stones, and his solo career sniffing for hit singles, Stewart had lowered the bar with his music and song choice.The grit and rustic beauty had been replaced by spandex and a synthesized sheen that resulted in soulless hits like “Do Ya Think I’m Sexy?” and notoriety for the models on his arms in the gossip column gristmill as much as his musical pipes.Although Stewart’s disheveled vagabond attraction may have been smothered with show biz gloss, Hollywood-style outfits and that dreaded word for rock & rollers – “maturity” – his rooster hair, good cheer and uniquely weathered voice have endured through decades.The multiple Grammy winner has sold more than 130 million records worldwide, he’s a two-time Rock and Roll Hall of Fame inductee (solo and with The Faces) and is a staple on classic rock radio stations worldwide with massive hits like “Maggie May,” “Baby Jane,” “Sailing,” “You’re in My Heart” and “Tonight’s the Night.”Along with other musical icons from the 1960s such as Bob Dylan, Stewart has spent recent decades digging into the pre-rock musical bedrock for a series of well-received albums of pop standards from Great American Songbook writers like Irving Berlin, Cole Porter, and George and Ira Gershwin. The albums proved enormously successful, matching his record sales from the 1970s and proving that his voice effectively cut across genres.When he takes the stage on June 14 at Hayarkon Park, the now Sir Rod Stewart (he was knighted by Queen Elizabeth last year), it will be as a musical institution. And if any confusion remains over what to expect, the all-caps name of his current tour – which is stationing itself in Las Vegas later this year – is HITS 2017.Based on his last visit to Israel in 2010 at the Ramat Gan Stadium, the concert will hardly be a sedate affair. The fanatical soccer fan belied his then-65 years by kicking 20 balls into the crowd during “Hot Legs.”During that 21-song set, Stewart reinforced his fashion-plate status by changing jackets over the course of the evening from gold to white, purple and pink.Stewart can still get down and dirty – he’s just learned how to do it in style.Rod Stewart will perform on June 14 in Hayarkon Park in Tel Aviv.