Fifty years and a new chef at the TA Hilton 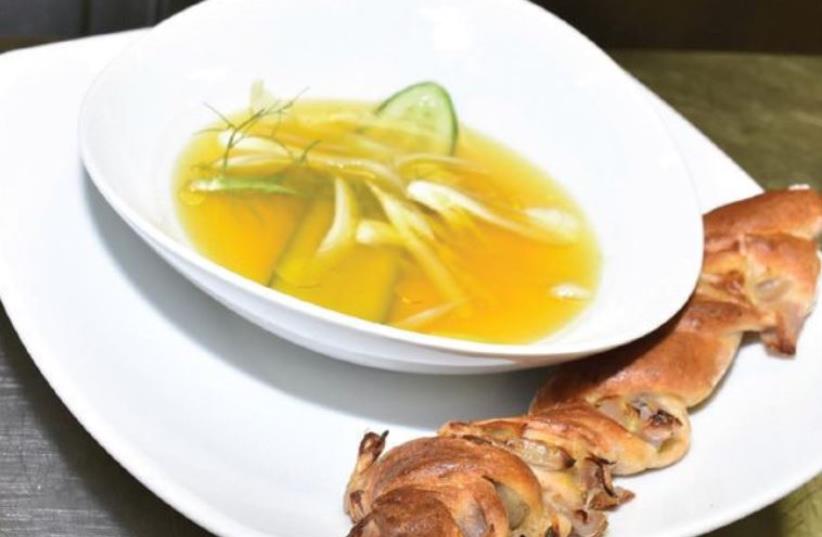 The Tel Aviv Hilton Hotel's restaurant
(photo credit: PR)
Advertisement
The Tel Aviv Hilton celebrated two landmark events recently – 50 years since it was built on the sand dunes of the city, the first five-star hotel in the Coastal Plain soon to be joined by many more; and the appointment of new head chef, Rafi Jabaran, who hails from Umm el-Fahm.After 50 years at the helm Avigdor Barry has retired, and Jabaran, who studied under some of the top chefs in London and elsewhere, has taken his place. To mark the occasion, six well-known chefs from around Israel were each invited to prepare a course for a seven-course luncheon. The dishes were small, but it all added up to a large amount of first-class and filling food.The reception before the meal consisted of champagne – buckets of it. No nibbles, but they knew what awaited us.We sat down at a beautifully laid long table with flowers and small potted plants of basil, thyme and other herbs. There were various dips and some incredibly shaped loaves, some baked around a branch from a tree, others studded with black olives and sun-dried tomatoes. Our linen napkins were folded and tied with a handful of raffia and decorated with a sprig of rosemary. The loaves were the contribution of chef Erez Combrowski of Lechem Erez.The next course was presented by Eli Cohen, the chef of the Yakimono Japanese restaurant at the hotel. This consisted of chunks of poached gray mullet in a very spicy red pepper sauce. We were expected to eat this with a pair of chopsticks, which were provided. It was delicious, but I wonder if it isn’t too peppery for those European tourists who will be dining at the Hilton.Chef Victor Gloger of the Chloelys restaurant presented a ballotine of Portobello mushrooms stuffed with more chopped mushrooms and a piece of baked sea bass topped with fresh asparagus. It was very good and as it came early in the feast, it was very welcome.Dish number three, described as “tartare of sheitel, Sicilian style,” was a neat rectangle of chopped raw meat of some kind with onions, cucumber and pine nuts, garnished with a leaf carved from a radish. Many of the diners didn’t finish this. Tartare is not for everyone, but I thought it was excellent. The dressing was piquant without being oily. This was the contribution of chef Avi Steinitz of the Dan chain.Next up was a consommé from Erez Combrowski, flavored with saffron and garnished with crunchy fennel. On the side were individual hallot baked with a compote of shallots – absolutely delicious! Chef Jabaran then produced goose liver paté, which frankly I can’t eat, having once watched a goose being force fed (on a moshav in northern Israel by ex-patriate Brits). My dining companion said it was divine. The accompanying apple tarte Tatin and balsamic macaroon were very good.Chef Paul Assenheim, who has cooked for President Obama and many visiting celebs, offered lamb chops in ground chickpeas.Predictably superb.Dessert was the contribution of the only woman represented – Shlomit Avodi, the hotel’s pastry chef. It was salty caramel pop with a piquant ginger sauce – a hearty flavor combination ending the meal with just the right touch of sweetness.Motti Verses, the hotel’s PR manager, explained to the assembled diners that what we had just eaten were some of the dishes available for anyone making a wedding or other simha at the Hilton. With the new chef ensconced in the kitchen, any party at the Hilton promises to be a truly festive occasion.The writer was a guest of the restaurant.Tel Aviv Hilton Hotel Kosher 205 Hayarkon St., Tel Aviv Tel: (03) 520-2222