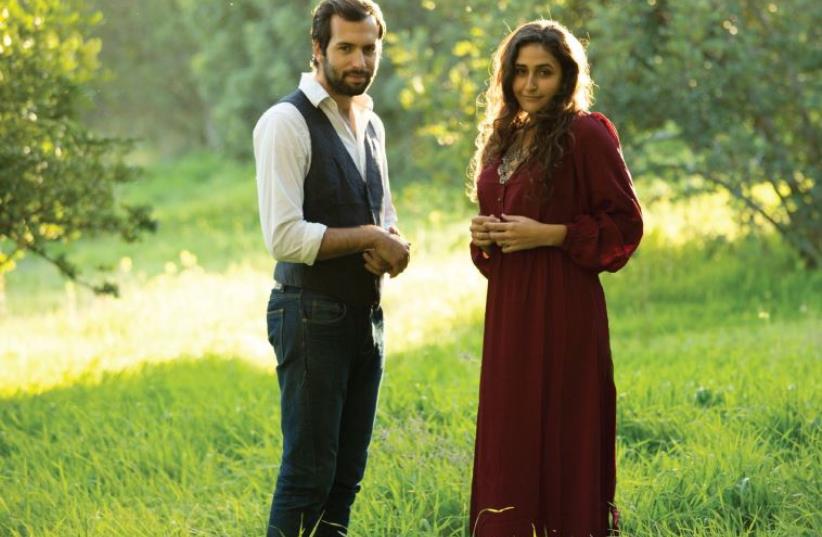 Tamar and Netanel Amar
(photo credit: Courtesy)
Advertisement
To say that Israeli folk duo Tamar and Netanel Amar, collectively known as Tamar and Netanel, are harmonious would be an understatement. The married couple plays and sings together like they’re, well, in love, with one another and with the music that pours from their souls. With Tamar on the violin and Netanel on the guitar, the two have almost single-handedly brought simple American folk music to the Israeli audience. With their debut album, Peace of Mind , released last year, and a brand new album in the works, the Israeli music scene will continue to enjoy the breath of fresh air that they provide. Tamar and Netanel are playing at the Post Hostel in Jerusalem tonight at 9 p.m. and at Nola Socks Pub in Haifa on July 15. They sat down with The Jerusalem Post to discuss dating and performing simultaneously, record- ing music with friends and how two Israelis got hooked on Ameri- can folk.What are your musical back - grounds?
Netanel : I was born in Jerusalem. My mother is Canadian. When she came to Israel when she was 21, she brought a lot of folk records like John Denver, James Taylor and musicians from Woodstock. When I was 14, I started playing the guitar and listening to all of her records. We actually used to fall asleep with my mom’s Simon and Garfunkel record playing. That’s the reason why I write folk music. It’s what I know. It’s how I grew up.Tamar : I grew up in Jerusalem. My mother also played folk music at home. She had lived in the United States for a year because we have family there, so she brought the folk music back with her, like Carol King and the Carpenters. We also played a lot of Israeli music in my home. My father used to travel abroad a lot and whenever he would go somewhere, he would bring me back a CD. He bought me Bob Dylan and I loved it. I started to study violin when I was eight. Then when I was 14, I learned guitar and started to develop my songwriting skills. It was all very natural. I studied violin at the Jerusalem High School Academy of Music and Dance. Then I changed my focus to singing. When I finished the army, I started working on my own album. I was performing those songs when Netanel found me. I didn’t end up releasing my solo album because it wasn’t a good time; my family had been through something really difficult. When Netanel came into my life, it was a cure for my music and my soul. I felt that I had found the perfect partner in music and in life.How did you two meet?
N : About three years ago, I came to a show where Tamar was performing. I wasn’t performing at all. I was writing at the time, but it was all new to me. I saw her perform and she played a John Denver song. I was surprised because I didn’t know that people knew that kind of music here. As soon as I heard that, I fell in love. We started talking and playing together after that. We got married a year later.

How did your music progress from when you first began playing together to the release of your debut album?
N : I wrote a couple of songs before, but Tamar was very experienced at songwriting. After we met, we started dating and performing together.T : It was interesting to be getting to know someone romantically and musically at the same time, but it was very natural. It just happened and it was magical.N : “Oh Lord” was actually the first song that we wrote together. We sat for a couple of hours and came out with that. Most of the songs on the album we wrote together, except for “Once Early in the Morning” and “I’m Gone.” But most of the songs, we wrote the music and the lyrics together.‘Peace of Mind’ was released last April?
N : Yeah, over a year ago. We didn’t have a big show to launch the album initially because we had worked a lot on the album, and we just wanted to release it. We still did pretty well despite that. Up until now, we’ve sold about 1,000 physical copies just from people buying CDs at shows. That’s besides the digital copies that have been sold. We finally did a big show to launch the album on the one-year anniversary of its release. It was a band concert, so for us, it was the first time that we were bigger than a duo. We hosted Hadas Kleinman and Aviv Bahar. It was really fun. We also did a few shows in Boston and New York.Is there a new album in the works?
N : Yes, we’ve started collecting material and writing it. It’s going well. The first album was recorded by a producer who is a very good friend of ours named Netanel. His parents came from the US and are very into folk music, so he grew up on it also. The process with him was very natural. We felt it was the best way to make the album. He has a studio in his own home, so most of the album was recorded there. We would like to do it again with him. A friend of ours who has recorded many albums told us that the best way to record and perform music is with your friends, not with people you hire. As long as they’re good! Everyone around you and anyone working on the album needs to believe in what you do. You can feel it when that’s the case. Since American folk music is not so common in Israel, it’s better to do it in a small studio.Has American folk music’s lack of popularity in Israel been a worry for you?
N : It is an issue and we get a lot of questions from our audiences and our colleagues about why we sing in English, for example. The truth is that we wanted to give the audience peace of mind, like our album title. We wanted them to feel the simplicity that we felt growing up on folk music. We felt such love for that simple music, and you can’t pass that on if it’s in Hebrew because the language is part of the music. If we’re playing American folk, we have to sing in English. We have one song in Hebrew on the album. It’s a song from Rabbi [Abraham Isaac] Kook, which we composed. We call that the Jewish heart of the album. Throughout the album though, we were influenced by Jewish philoso- phy. That’s what we want to give to the world: positivity and calmness. In life, you have a lot of bad things, hard work and tough experiences. We think that music should just give you good.
Advertisement
Subscribe for our daily newsletter