Surf’s up for Boom Pam

The exuberant Mediterranean surf rock band keeps the party going as they perform at two local festivals this week. 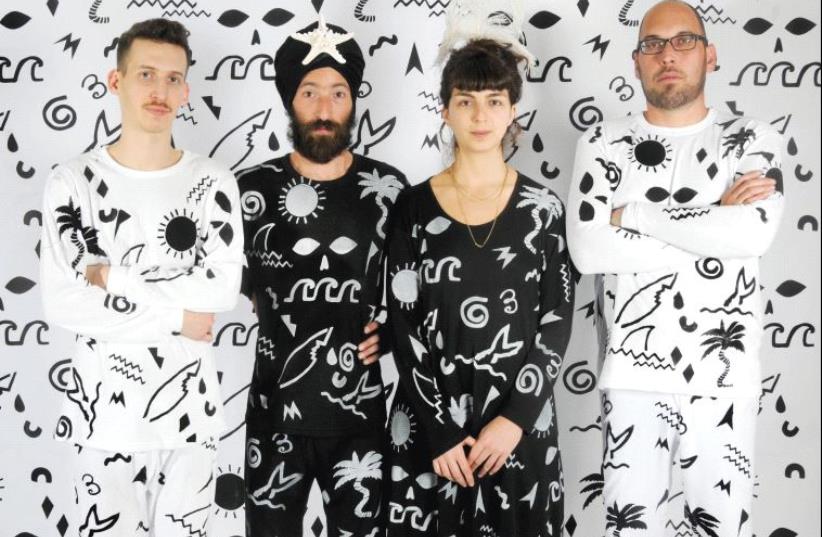 BOOMTASTIC: Boom Pam guitarist Uri Brauner Kinrot (second from left) seen here with the rest of the band.
(photo credit: Courtesy)
Advertisement
Boom Pam is sheer Middle Eastern rock, with some drunken wedding party antics thrown in. Guitarist Uri Brauner Kinrot, Yuval “Tuby” Zolotov on tuba, Dani Ever Hadani on keyboard, and Ira Raviv on drums know how to keep the party going.With an EP and four LP’s under their collective belt, as well as international tours, Boom Pam shows no signs of slowing down. They will play the Shutka Festival from September 16-17 and the Jerusalem Sacred Music Festival with Turkish singer Selda Bagcan on September 23. Kinrot sat down with The Jerusalem Post to discuss how to be in multiple bands at once, the meaning behind the name Boom Pam, and their recent musical collaborations with Bagcan.

What is your musical background?I started playing music in high school.Some people who I still play with are my school mates. My parents wanted me to have music as an extra, but I ended up being a professional musician. It was not planned; I just started playing more and more in high school and then after, I continued doing that. When I was 21, after playing with lots of musicians in Tel Aviv, I was living with Uzi Ramirez and we started Boom Pam in 2003. Before we officially formed the band, we played a lot together.We had another band before that with other school mates, but Boom Pam was the first thing we did that really took off.At the same time, I joined Balkan Beatbox.I played with them for six years.How did you manage being in two successful bands at once? It was actually more than two! After a few years, I joined Firewater as well. It was basically really intense touring for awhile.Then I decided to concentrate on my own music. So in 2009 I left Balkan Beat and Firewater to concentrate on Boom Pam.Three years ago I started Uzu Bazooka and those are the two main things that I do now. I produce albums and mix songs for others also.What’s the meaning behind the name Boom Pam?

It’s an old song from the late ‘60s by Aris San, a Greek singer. We love it. It was one of the first songs in our repertoire before we had a name, so we decided to call the band that. The meaning of it in the song is the heartbeat.Was San an influence on you musically? Oh yeah, he’s an amazing guitar player.The first time I heard him, I was really into surf rock and it’s kind of the same, but more Greek oriented. He has crazy guitar solos that really blew my mind.How do you define surf rock?Surf rock is ‘50s rock and roll with Oriental influences. They used Oriental scales and that’s the main characteristic.Boom Pam has put out an EP and four LPs. Are you working on something new? We’re recording new songs here and there, but the main thing now is recording.We have also done a little recording with Turkish singer Selda Bagcan, who we’ve been playing with a lot recently. We played shows with her all summer in Turkey and Europe. We just played a show without her in the Ukraine and another show with her at a festival in Berlin. There’s also a show in the Mekudeshet Festival with Selda in [the Tower of David in Jerusalem’s Old City]. It’s a very powerful occasion. We really want to keep playing more shows with Selda. That’s the main thing that we do now; we put our energy into that. We want to expand our repertoire and play more songs with her, but it takes time. She lives in Turkey and we’re here. She doesn’t speak English, so we always have to have a translator with us.Everything is a little bit slower than what we’re used to, but it’s worth it. The last few shows with her have been really exciting.We recorded two songs with her already and are planning on more soon.How did you first meet Selda? We invited her to play with us at a festival in Tel Aviv four years ago. I was introduced to her music in 2007 by one of the members of Firewater who lived in Turkey for awhile.It really blew my mind. She is a legend in Turkey. Now finding myself playing with her is quite exciting actually. She wasn’t open to it right away, but after a few meetings, we made it happen. We had to convince her because she’s a character; she’s tough.Even though she’s older and from a different time, the music that I really dig from her is from the ’70s. Since then, she hasn’t been into rock and roll, but I guess we brought her back to it. We’re playing now as a backing band for her and it’s incredible.

What are your hopes for the future of Boom Pam? To continue playing around the world.This is what we love to do. I also wish to play in our neighboring countries that we can’t play in now.What’s your take on the rock scene in Israel? I think we have really amazing bands – mainly the ones who are trying to put something original and Middle Eastern into it and not just playing British or American rock. That’s more exciting for me. I think Israel has really good bands these days and more of them are playing shows and gaining fans outside of Israel.I don’t think that it’s because it’s easier these days either, I think it’s just that they’re good.To purchase tickets to the Shutka Festival, visit www.eventer.co.il/shutka. For the Sacred Music Festival concert visit http:// en.mekudeshet.com.