Swimming for a cause: From the Dead Sea to the Pacific

“I love sharks,” says swimmer with a heart. “They are a very important creature, but nevertheless, as a swimmer, there is some risk here.” 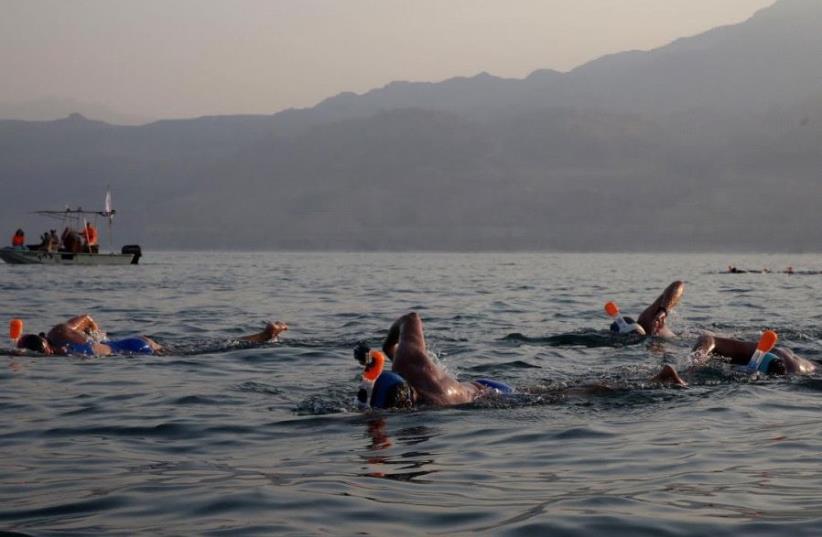 Oded Rahav at the November 15 Dead Sea swim
(photo credit: GALI TIBBON)
Advertisement
Less than six months after completing a seven-hour, salt-drenched swim across a dwindling Dead Sea, Israeli activist athlete Oded Rahav is ready to take on the waves of the Pacific Ocean.Along with 11 other swimmers from around the world, Rahav is set to embark on a 10-kilometer journey this Friday, from Imperial Beach south of San Diego, California, across the US-Mexico maritime border in the Pacific Ocean to Tijuana, Mexico.Calling themselves the Pan-American Colibri Swimmers (PACS), the swimmers are hoping to raise awareness and money for the Colibri Center for Human Rights, which helps alleviate the suffering of individuals whose family members have died crossing the US-Mexican border.“We have the privilege, the capability, the connection, the drive, the sympathy and the morals, and we think that if not us, then who, and if not now, then when?” Rahav told The Jerusalem Post on Sunday.
For Rahav, swimming has become a “message in a bottle” or a “giant whale going throughout seas.” Rather than focusing on breaking world records as an athlete, he said he would prefer to swim for a cause and convey important information to observers.“This is how I actually visualize it when I swim. I see myself as this mammal in the sea,” he said. “You have this privilege when you’re a mammal at sea to look at things in this different perspective.”Just a few months after completing a swim across the Dead Sea in November, which took place as a campaign to save the depleting salty reservoir, Rahav said two of his team members there raised the idea of doing the California to Mexico swim.Following the swim, the participants are hoping that the Tuscon, Arizona-based Colibri Center will be able to continue its work on a larger and that the venture will inspire athletes around the world to help mend political, cultural and social differences, a statement from the swimmers said. The swim, they explained, is an example of “Speedo diplomacy” – using sports for greater good as people come together to resolve issues with mutual respect.
“If you don’t deal with these topics in a humble, respectful way, they not only won’t go away, they will come charging at you in no time,” Rahav said.“As people, we tend to turn our backs and walk away, and we cannot do that anymore.”Friday’s swim is expected to take about three to four hours, depending on the exact swimming route, Rahav explained. Due to the tremendous amount of sewage dumping occurring in the Tijuana River, the swimmers may need to divert their path slightly if such spillage occurs in the coming days.The sewage dumping, he said, has become a derivative cause that they are fighting against and could become a reason for a future swim.“It’s unbelievable what’s going on there,” Rahav added.Although he has never swum in the Pacific Ocean before, Rahav said he expects the conditions to be challenging.In addition to the strong tide, large waves and 15-degree Celsius water temperatures, the oceans are known for “surprises” like sharks and jellyfish, he said. In order to minimize potential threats, the athletes will be swimming with SharkPODs – protective oceanic devices that generate an electromagnetic field to deter sharks.“I love sharks,” Rahav said. “They are a very important creature, but nevertheless, as a swimmer, there is some risk here.”Rahav stressed, however, the importance of saving the globe’s shark population, as some 110 million of these animals are killed every year.“They have bad PR, but they are part of the universe,” he said. “They have a duty, they are gallant, they clean our oceans, they are beautiful.”While Rahav might be new to the Pacific Ocean, he now has a robust history of taking part in such cross-border swims, plunging into salty waters as an opportunity to spread awareness about numerous causes.In 2014, Rahav was one of six athletes to swim from Cyprus to Israel in 2014 to fight marine litter. After successfully completing that journey – a six-day swimming relay – he took on a leadership role at a much different swimming mission, the November 15 trip across the dangerously salty Dead Sea.As part of a massive campaign to save the depleting Dead Sea, Rahav led a group of some 30 athletes in an unprecedented swim from Jordan to Israel. The swimmers, who were the first in recorded history to make it all the way, aimed to increase attention to the condition of the sea and the surrounding region.To accomplish the swim, they worked with a variety of parties, including the Tamar Regional Council, Eco-Peace Middle East and the Regional Cooperation Ministry.“I wanted to arrange a global statement because as I said time and again, the Dead Sea doesn’t belong to us,” Rahav said.
(Oded Rahav)
Although the Dead Sea swim took seven hours, with the hypersaline water irritating the participants along the way, Rahav said he felt the journey accomplished their goals. Journalists from 120 media outlets arrived on the day of the swim alone, while four Dead Sea benefit concerts have occurred since. Meanwhile, the region’s mayor has been investing enormous efforts in maintaining the momentum spurred by the swim, Rahav added.“I know time is not on our side, but it’s the least we can do,” he said.