The tastes and sounds of the Judean Hills

Music festivals provide a good reason to visit the region 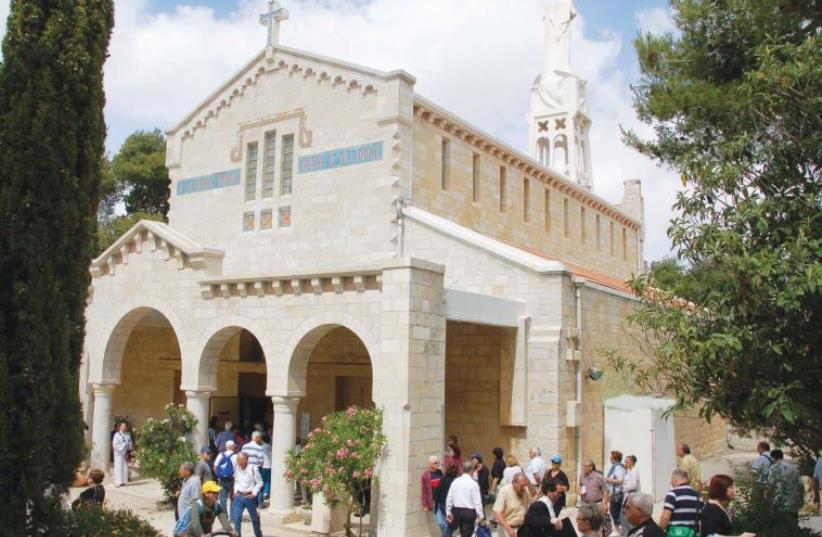 The Notre Dame Church of Kiryat Ye’arim
(photo credit: WWW.GOISRAEL.COM)
Advertisement
The Arab town of Abu Ghosh, just 15 minutes from Jerusalem on Route 1, is a favorite spot for weekend day trippers from the capital. Twice a year, how- ever, on Succot and Shavuot, Abu Ghosh becomes a magnet for music lovers from around the country, when the town hosts Israel’s leading festival of sacred choral mu- sic. Moreover, the multi-day festivals are a good opportunity to spend longer than just a morning or an afternoon in a place worth getting to know. The Abu Ghosh Vocal Music Festival has been a fixture of the Israel sacred music scene since 1992, and under the professional stewardship of musical director Hanna Tzur for the last 20 years. According to Tzur, some 8,000 people attended the most recent festival during Succot, which presented 16 con- certs performed in two historic venues with excellent acoustics: the Notre Dame Church of Kiryat Ye’arim and The Crypt, the chapel of a centuries-old monastery. The performances starred many of the leading choirs in Israel, as well as a visiting ensemble from Estonia.“Virtually every festival features a prestigious foreign choir,” says Tzur, who compiles the programs and invites the performers. Understandably, the majority of the musical compositions are drawn from the liturgy of the Catholic Church, whose masses inspired the greatest composers of the ages; Dvorak, Schubert and Vivaldi were among the headliners of this year’s Succot festival. But there were also moving renditions of Hebrew prayers and poetry and a rousing performance of Purcell’s King Arthur , a distinctly secular work. In between the more formal concerts, there are outdoor performances, mostly on Saturdays and holidays, which make for pleasant strolling in a festive atmosphere. Abu Ghosh may be convenient to both Jerusalem and Tel Aviv, but it is worth noting that there is a nice place to stay that is in walking distance of the concert venues. The Jerusalem Hills Inn – the family home of Chaim and Ruti Singerman, olim from Texas – is a hilltop villa that underwent significant renovation in order to become a charming bed & breakfast. The inn comprises 10 guest rooms, among them a suite ideal for families, and common areas that include a sunny patio and a terrace with a stunning view.The inn itself exemplifies the epitome of coexistence that Abu Ghosh has come to represent. There may not be a synagogue among the town’s Christian and Muslim houses of worship, but Jewish families live in harmony with their neighbors. When the inn owners constructed the succa, recalls hotel manager Karen Desimone, an Arab neighbor brought palm fronds for the roof. The inn, whose prices are moderate, has become a popular place for Christian guests, primarily from the United States. The rooms may be small and lacking televisions, clock radios and telephones, but the American- style beds and mattresses are luxuriously comfortable. The kitchen-dining room arrangement is B&B bordering on hostel- style: The complimentary breakfast buffet revolves around cold and pre-cooked foods, but guests are welcome to make their own eggs. Snacks of fresh fruit, as well as coffee and tea, are freely available all day long.Abu Ghosh is well known for its many restaurants, and frequent visitors have their favorite places for hummus, grilled meats, baklava and knafeh. But people who take particular pleasure in fine dining would do well to venture across the highway to the town of Ein Rafa and settle in for a sumptuous meal at the rustic restaurant Majda (not kosher).Majda’s owners are the Jewish-Muslim husband-and-wife team of Yakub and Michal, who is a trained chef. After operating a popular cafe in Abu Ghosh for several years, the couple opened their “local cuisine” restaurant in 2008 and quickly garnered a loyal following of customers. In 2013, American TV personality chef Anthony Bourdain brought his CNN show Parts Unknown to Majda. Patrons of Majda can sit in one of two cozy rooms or dine alfresco in the pleasant, shady garden patio. There are English and Hebrew menus, best perused while sipping the cold herbal tea brewed from plants growing in the garden.One page of the menu is devoted to Majda’s famous breakfast/brunch for two, served on weekends, which is primarily when the restaurant is open. It is always best to check the restaurant’s weekly schedule, as it can vary.The bulk of the menu is devoted to the distinctive dishes that have earned the restaurant its reputation. Among them are Majda’s savory stuffed katif: light, delicate turnovers, fried to golden perfection. There is a vegetarian version made with chopped chickpeas (the menu highlights dishes suitable for vegetarians and vegans), as well as one filled with exceptionally flavorful ground beef. Additional examples of the restaurant’s innovative variations on local Arab cuisine include eggplant with labaneh instead of tehina, and tri-color tehina – the pink and orange hues coming from beets and bell peppers, respectively. The menu is seasonal, so there are new delights in the spring and fall. Majda’s signature dishes include shishbarak, remarkably similar to kreplach, served on a bed of yogurt; pastiaphyllo dough filled with well-seasoned ground chicken and topped with candied pumpkin; sardine siniye, like a supercharged shakshuka with sardine fillets replacing the traditional eggs; and lamb couscous, the tenderest of meat atop the fluffiest of grain. The dessert menu is extensive and worth leaving room for. In particular, the rich chocolate cake with the subtly flavored lavender sauce is bound to leave a lasting impression. It is fortunate that twice a year we have the opportunity to discover a combination of culture and gastronomy in a small provincial town that is on a par with big-city sophistication.■ The writer was a guest of the places mentioned.