"Director Noam Shmuel seems to feel we’re not bright enough to get it." 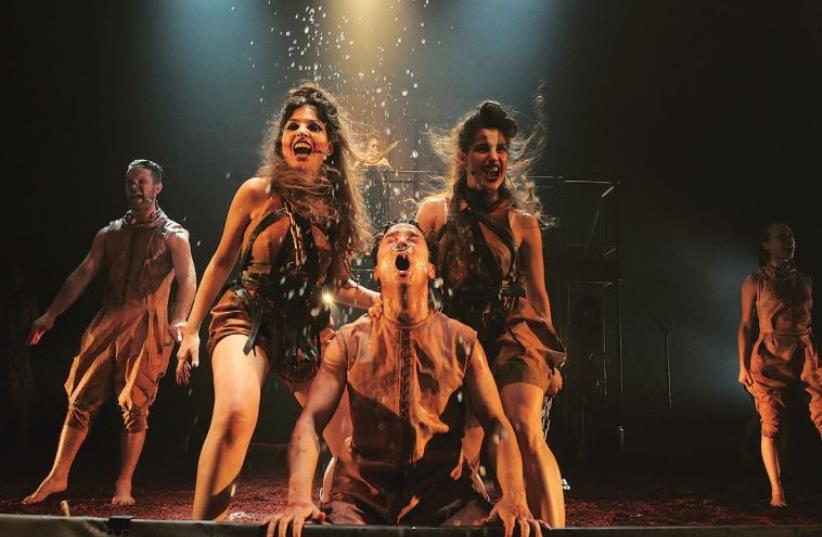 Animal Farm starts out so well. The oppressed animals of Havat Ha’Adon (The Master’s Farm) determine to run their own lives, to live in perfect community and equality, free of the evil influence of humans. The Seven Commandments will be their guide, especially the one that says “All animals are equal,” and the farm will now be known as Animal Farm.An old boar named Major, played with suitable gravitas by Avi Azulai, leads the rebellion, but when he dies two ambitious young pigs take over, Snowball (Hillel Kapun) and Napoleon (Aviv Carmi).Naïve Snowball wants the animals’ good. Napoleon wants power, and he gets it, via a show trial to get rid of Snowball. Pretty soon the seventh commandment says: “All animals are equal but some animals are more equal than others,” and horror comes to Animal Farm.Orwell’s 1945 novel Animal Farm is a political allegory combined with biting satire that indicts Stalinism and the Soviet system. The Gesher Theater production is a musical version of the novel that Peter Hall first did at the National Theater with lyrics by Adrian Mitchell and music by Richard Peaslee, and it almost works.Almost, because director Shmuel seems to feel we’re not bright enough to get it. The actors, therefore, are so busy pushing the ghastly point that nothing has changed into our faces that they forget to “let the picture tell the story.”Which it could, because it’s all there.To begin with, rather than dress up as the various animals, the actors portray them brilliantly via voice and movement, coached by Amit Zamir. Niv Manor’s minimalist set includes a “wall” of plastic panels, perfect for “graffiti,” and to obscure the ramshackle structure behind it. A series of different-sized metal barrels – a metaphor for guns? – function as both furniture and props. Napoleon uses the water troughs on the forestage to waterboard Snowball, and to wallow in, but they are also metaphor for death, like the river Styx.The animals wear Avia Bash’s unisex costumes, a nod to Mao’s China and to Orwell’s own 1984. They’re muddy looking, murky as Ziv Voloshin’s clever lighting. The actors’ diction gets muddy too, but in the main they deliver text and song with energy and enthusiasm.This Animal Farm is fine ensemble work, especially as some of the actors portray more than one animal, notably Sivan Matat who’s both the nervy, high-strung mare Molly and one of Napoleon’s eager, slavering attack dogs. As Molly, she also heartbreakingly sings “27 Ribbons” after she’s sold herself back to servitude.The absolute standouts are Carmi as Napoleon and Gal Ben-Amra as the strong carthorse, Boxer.Ben-Amra’s shambling, uncomplaining, loyal – “Napoleon is always right” – and clueless Boxer is perfect. He maintains dignity, even as he’s sent to the knacker’s yard once his usefulness is over. Carmi’s increasingly vicious Napoleon lets his menace show gradually. As his power grows, so does his weight, actually and politically. As he sings in “Napoleon’s Song,” the runt of the litter has become “leader of the pack” and Carmi lets us savor Napoleon’s glee. Animal Farm, he trumpets, is once again The Master’s Farm, and he is undisputed master.Is this where we’re going here? Is this what this Animal Farm is asking?
Advertisement
Subscribe for our daily newsletter