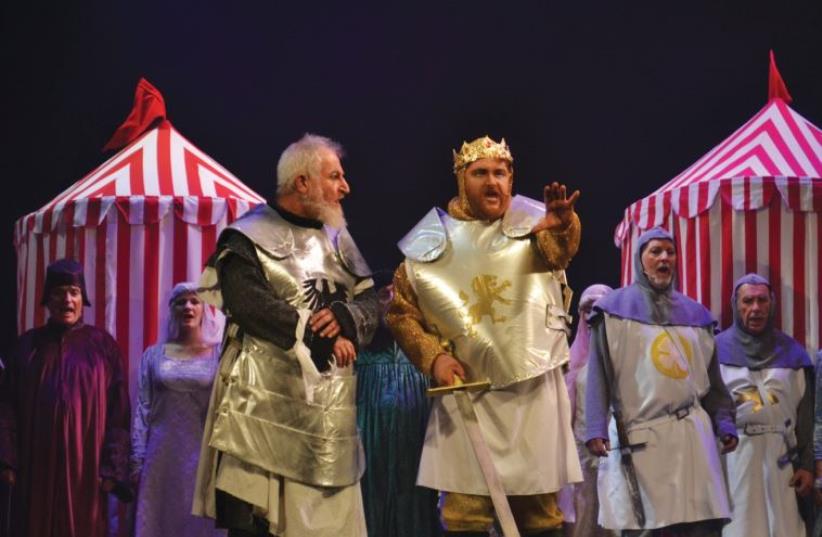 LOGON’S production of ‘Camelot.’
(photo credit: AVITAL COHEN)
Advertisement
Opinions were sharply divided on the Light Opera Group of the Negev’s production of Camelot which is presently touring the country. Some people at the interval were heard to groan that they had to sit through another hour, others couldn’t wait to get back to their seats.It’s now 35 years since the Light Opera Group of the Negev (LOGON) burst onto the scene, bringing Gilbert and Sullivan to culture-starved Israeli Anglos and eventually expanding the repertoire to include popular musicals.Camelot, the 1960 Lerner and Lowe musical depicts a gracious world of refinement and chivalry, and quickly became a synonym for the Kennedy years and the flowering of those qualities in the all too brief reign of John and Jackie.Watching a LOGON production one always has to keep reminding oneself that these are amateurs, although some aspects of the production were so good that they could easily have passed for professional. In fact some of the participants are professionals in their field, particularly technical staff.The costumes, including medieval suits of armor and the imaginative sets – both the work of Melanie Lombard – were outstanding. Director Yaakov Amsalem kept the Lancelot and Guinevere love story moving at a steady pace and if there were any longueurs it was the fault of the script and not the production.Vocally we have had far better singers in the past. All these Beersheba academics who make up LOGON are professors and post-graduate students first and singers as an afterthought.Sarit Nagar (Queen Guinevere) has a lovely soprano but it was too restrained and sounded coached.Brett Goldman (King Arthur) has some stage presence and conveyed the humanity of the character well.Rotem Zilberman was a handsome Lancelot, but came across as rather stiff and his diction was unclear.Maybe moving from California to Arad, which he did in 2013, does that to people. Eric Isaacson was a dignified King Pellinore with his deep, upper-crust voice. As always it was good to see stalwarts like Ed Spitz as Merlin the magician and Arnie Gross as Lord Castor, and many other familiar faces.One is left with the distinct impression that the cast enjoyed themselves as much in performance as rehearsal.Long may they continue to brighten our lives.

For upcoming dates and tickets visit www.negevlightopera.com
Advertisement
Subscribe for our daily newsletter