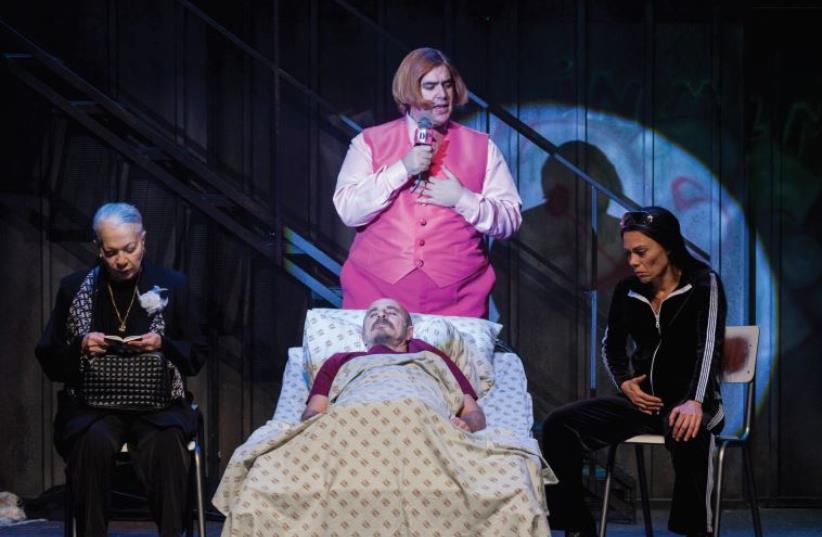 ‘JACKO’
(photo credit: GERHARD ALON)
Advertisement
Ya’akov Cohen, who plays the title role, is an actor of protean talent. Itzik Weingarten is one of our most perceptive directors. Despite their combined abilities, despite the many program notes attesting to its seriousness, Jacko remains a bread-and-circuses play that expects little from its audience.It’s set (where else?) in a southern development town where its Mizrachi (what else?) textile worker hero Jacko Nachmias (Cohen) trudges the uneventful path of what passes for his life. One day it all changes. Jacko gets fired, discovers he’s adopted, sterile, that his best friend and shop steward Alkalay (Kobi Maor) is the father of the child his wife Geula (Micki Peleg-Rothstein) is carrying, his adoptive mother (Rivka Gur) can’t stand him, and the last straw? If he’d turned in his lottery ticket, he and Alkalay would now be sharing its NIS 8 million winnings.But even committing suicide is not an option. Heaven’s clerks toss him out. He’s not on the list. “Come back in a week,” they tell him.It’s a transformed Jacko who returns to take comprehensive revenge on all who’ve slighted him.“Evil is addictive,” he observes, but we have to have a redemptive ending, so before he’s readmitted to Heaven he must make everything right.Jacko as Everyman? Everyman was a 15th century allegorical morality play in which Everyman represents all mankind. Allegorical figures accompany him on his quest for Salvation, but in the crunch, they abandon him, and he must go it alone.We too, hints Jacko, are on our own, pygmies who must contend against the giants of Greed, Capitalism and Social Inequity, but Hatzor seems content to dig no deeper, provided the laughs keep coming, and they do.Most of these are provided by Uri Hochman, Ami Smolarchik and Ben Yusipovitch who boisterously play a variety of roles, among which are those heavenly clerks who gift us with the funniest scene in the play. Yusipovitch gets a special mention as Pink, the ghastly TV reality-show host.Cohen, who has given us a memorable Shylock (Merchant of Venice) and an equally memorable Harpagon (The Miser) here trots out an unassuming, unambitious, unmemorable Little Man whom life has clobbered. His Jacko has no expectations and fewer illusions, almost effaceable.Now that’s a challenge. Cohen meets it, and then some.Rivka Gur is lovely as his unlovely adoptive mother, Micki Peleg manages neatly as the monochromatic Geula and Kobi Maor’s on-the-make, sometimes unhinged Alkalay is fun to watch.So is Jacko. But that’s all.