The past and the future conflict in all Chekhov’s plays, but not quite to this extent. 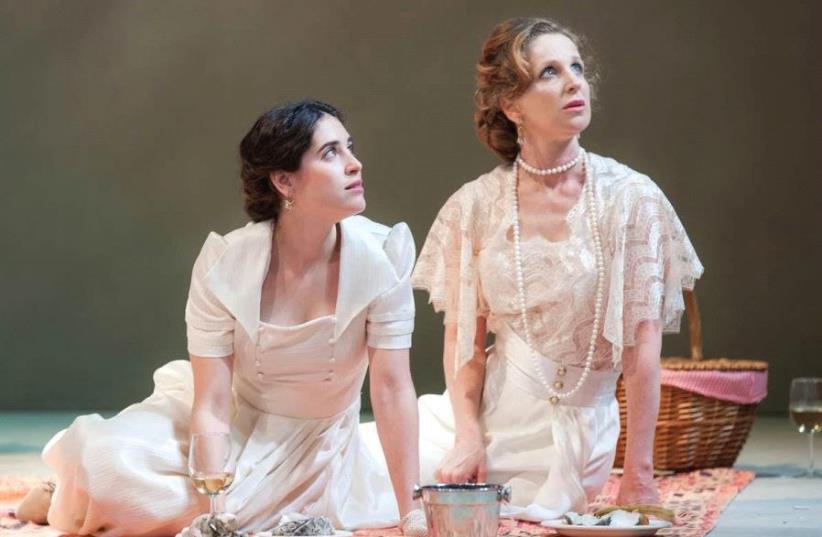 A SCENE from ‘The Cherry Orchard.’
(photo credit: MAAYAN KAUFMAN)
Advertisement
This is a thoughtful, tender, visually and aurally beautiful/terrifying Cherry Orchard, the play Chekhov might have written had he lived today, or even in 1914, at the start of World War I, when the known world changed for ever, and as such it works on its own merits. And it’s as such we must look at it: a play based on The Cherry Orchard with most of the same characters and more or less the same storyline that’s indeed set in 1914, as Svetlana Breger’s exquisite costumes proclaim.The past and the future conflict in all Chekhov’s plays, but not quite to this extent.“I see the world no-one sees/ crossing the mountains of time.../leading hungry masses/ wearing the thorny crown of revolution,” wrote Russian poet Vladimir Mayakovsky in his seminal “A Cloud in Trousers” that also dates from 1914, this excerpt from which Ido Ricklin puts into the mouth of perennial student Petya Trofimov (Tom Avni).And no-one sees it coming, not really, not even Petya who spouts all the obligatory rhetoric but can’t internalize it because he too belongs to the soon-to-be-swept-away old regime. Certainly Lyubov Ranevskaya (Shiri Golan) remains blissfully oblivious, as does her brother Gaev (Yaron Brovinsky).They’ve come home from Paris as to a refuge, beautifully realized by Elthan Levi’s almost monastic set, buttressed by a movable scrim painted with the branches of the doomed cherry orchard and decorated with a few pieces of period furniture.And even Lopakhin (Roy Assaf) only perceives the opportunities that action promises, missing its dark undercurrents.Ambitious, savvy, on the make, Lopakhin suggests that Ranevskaya can get out of the financial mess she’s in by building summer cottages on her land and renting them out, otherwise the property will be auctioned off. He’s ignored, of course, and at the auction Lopakhin buys the estate. The grandson of serfs becomes a landowner. Seemingly bereft of options, Ranevskaya returns to her abusive lover in Paris.“Aprés moi le deluge,” famously said Louis XV; Golan and Brovinsky, two of a kind, take that to the limit. Golan’s Ranevskaya is like a moth caught in the light. She’s heedless, blundering, capricious, insulting, impulsive and above all charming, never realizing that all the charm in the world is no match for reality. It’s an incandescent performance. As Gaev, Brovinsky is all of the above, plus there’s a forlornness to him that grows stronger as the play progresses. At bottom he knows he’s a relic.The relationship struggling to be born between doer Lopakhin and Ranevskaya’s stay-at-home adopted daughter Varya (Ma’ayan Turgeman) is the play’s sub-plot. Assaf’s assured, confident Lopakhin is lovely. It’s only when he’s confronted with Varya that the “dumb peasant” in him surfaces.As Varya, Turgemann is vigorously assertive, at home with herself and her place, except when it comes to Lopakhin.She’s afraid of his vigor, more afraid of the unknown. So what might have been comes to nothing, Chekhov telling us that Russia is muffing it in a fraught scene that’s one of the most touching in dramatic literature, feudal past and dynamic present unable to connect.Avigail Harari makes a winsome Anya – she’s Ranevskaya’s daughter after all – but with a bite to her. From the safety of Paris, will she see the writing on the wall? Assaf plays Trofimov with a wonderfully pettish futility while Uri Zaguri is staunchly determined as the money-obsessed Pischik. As the doddering old servant Firs presiding over dissolution, Ora Meirson maintains his dignity, his integrity. It’s her stance, her body language, the way she uses her voice. Firs has moral authority in a world in which morality will be extinguished.Finally there’s Dori Parnes’ music. It starts out tinkly, as lacy as a Victorian doily, getting darker and darker as the play progresses. Its Chekhov- dictated two moments of aural dissonance are as chilling as the last trump.Ido Ricklin’s Cherry Orchard sounds a warning that Chekhov never intended but that is here immanent.The Cherry Orchard By Anton Chekhov
Translated by Ro’i Chen
Adapted and directed by Ido Ricklin
Beersheba Theater, June 21