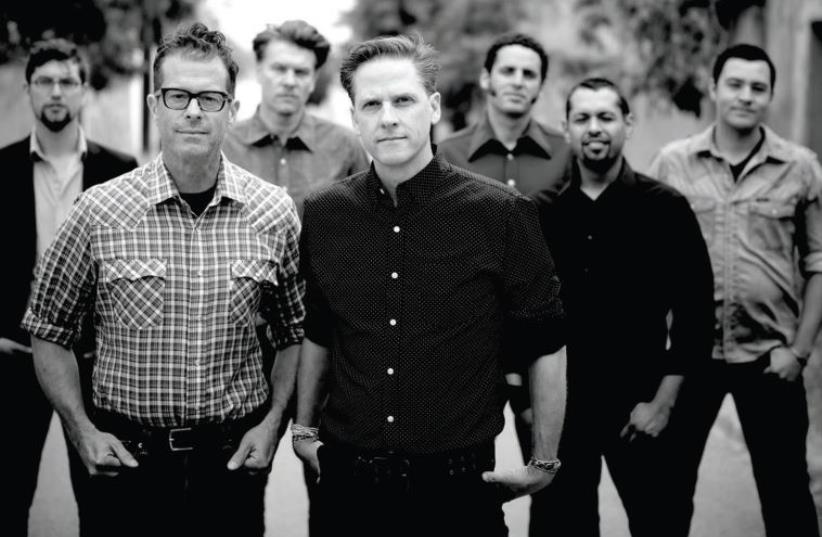 Calexico
(photo credit: PR)
Advertisement
When Joey Burns gets on a roll, he can sound like he’s on a soapbox gearing up for a presidential run on a ticket with Bernie Sanders. The front man of respected eclectic Arizona rockers Calexico, Burns is in the middle of describing the cultural differences between the American, European and Israeli mindset that he’s been exposed to on his frequent tours with his band. At some point, the earnest, idealist quality that pervades so much of Calexico’s music rises to the forefront.“Just today, I was reading a study that cited a researcher from Israel talking about the health benefits of drinking wine in moderation, and when I go to places like Paris or Tel Aviv, I see people doing just that,” said Burns recently during a phone call from his home in Tucson.“But in the US, there’s no such thing as moderation,” he says. “The portions of food on the plates are huge – they can feed a family of four. And a glass of wine is like a third of a bottle. I just want a small glass and a small plate.And that’s what I love about the Mediterranean – it’s something so simple. But over here in the US, there’s this sense of entitlement to the American dream that has become so distorted and bloated.”Calexico’s version of the American dream is mirror opposite of distorted and bloated. For more than 15 years, multi-instrumentalist Burns and drummer John Convertino have led a sprawling musical adventure that has used its rustic desert base to springboard into everything from lo-fi rock and Springsteenian Americana to spaghetti western noir, mariachi and Portuguese fado.That mix has won them legions of fans in the indie world, and Israel has been no exception.Following two triumphant appearances here in recent years, Calexico is returning on the heels of their most recent album, Edge of the Sun, for two shows: at the Gesher Theater in Jaffa on November 16 and, after its quick sellout, a second evening on the 17th at the Barby Club in Tel Aviv.For Burns, the third visit to Israel promises to be the sweetest.“Isn’t it awesome that we’re coming back to Israel so much?” says an enthusiastic Burns, expounding on what he liked about the country.“For me, the food stood out – it was so fresh – and just getting to know the people there who were down to earth, open-minded and shared similar views. The last time, our local promoter Eran [Arielli] took us to hang out with a local artist, and we had a home-cooked meal.We also went to a very eclectic café where they were spinning vinyl. We met a lot of musicians, and there was talk about collaborations. The more we return, the more those ideas become part of us. And hopefully, we’ll one day follow through,” he says.“We’ll be in Israel for two days, which gives us that extra time for a quality experience that can lead to bigger impressions and more inspiration. And then there are the concerts, which are the reason why we’re coming,” he explains.Burns admits that he was receiving regular updates about the security situation in Israel in the midst of the recent upswing in terror but explains that in stressful periods like that, it’s even more vital for musicians to play a role.“Of course, safety is a concern – I have to be concerned because I’m a dad. At the same time, I want to go even more because of what’s going on – just to be able to sing a song like [emotional ballad] ‘Hush’ and help us to let people open up,” he says.“One of our new songs, ‘Bullets and Rocks,’ somehow resonates with what’s going on [in Israel], even though it’s written about what’s going on here on the border between the US and Mexico. We have our own examples of tragedy and violence, and we’re involved in several conflicts around the globe. And that’s part of why we want to come to Israel – to talk to the people and to see and encourage other artists who are perhaps doing something to better the situation,” he asserts.If Bernie Sanders hasn’t found a running mate by the time Calexico’s current European tour is over, he could do a lot worse than approaching Joey Burns.Calexico will perform on November 16 at the Gesher Theater in Jaffa and on November 17 at the Barby Club in Tel Aviv.