Time Out: Luxury and innovation

The Waldorf Astoria in Jerusalem is hoping to be victorious in the hotel chain’s global culinary competition. 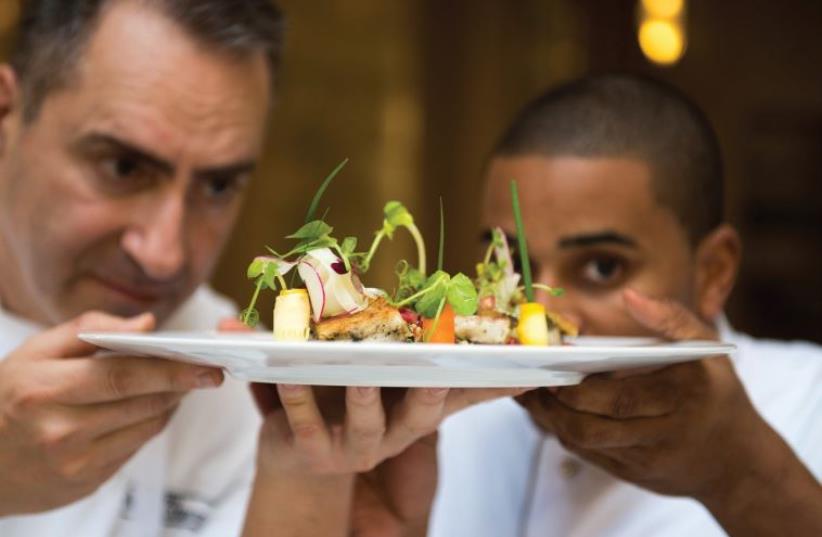 Chefs Itzik Mizrahi Barak and Joseph JJ Johnson with their creation.
(photo credit: SARKA BABICKA)
Advertisement
Waldorf salad. Eggs Benedict. Thousand Island dressing. You might not even realize that these signature dishes – which have taken their place in culinary gospel – are creations of the famed Waldorf Astoria hotel chain.Now the global luxury brand is planning to launch its next big culinary creation and enlisting help from its locations around the world, which include Jerusalem.The Waldorf Astoria in Jerusalem held an event last week announcing its entry dish into the official Taste of Waldorf competition.The hotel’s chef, Itzik Mizrahi Barak, is one of five finalists who will participate in the final leg of the competition to be held in February in New York. The winning dish will be added to the menu at every Waldorf Astoria hotel in the world. Each entry will be judged on four criteria: level of innovation, simplicity of preparation, taste and presentation.Famed chefs, foodies and journalists piled into the Waldorf Astoria in Jerusalem’s Palace Restaurant last week to taste “The Seven Species” – smoked eggplant-crusted sea bream alongside herbed bulgur and pomegranate with a cream of tehina sauce.Like the other four hotel chefs in the competition, Barak teamed up with a James Beard Foundation “Rising Star” chef to dream up the creation. Chef Joseph JJ Johnson from The Cecil restaurant in New York’s Harlem – one of Forbes’s most promising chefs under age 30 – joined Barak in Jerusalem for a five-day stay to collaborate on the dish.Last year, the chef at the Rome Cavalieri Waldorf Astoria took home the prize for a celery root risotto alla Waldorf.“The Waldorf Astoria in New York has a timeless reputation for creating world-renowned culinary masterpieces,” said Moti Verses, a representative of Hilton Hotels in Israel. “The organizers of the Taste of Waldorf competition believe chef Itzik Barak is a leader in true fine gastronomy.”Famed Israeli chefs such as Nir Zook of Cordelia, cookbook author Ruth Sirkis, Uri Navon of Machneyuda and Moti Ohana of Hachatzer were among those on hand to sample the dish and offer their critiques.Those in attendance also had a chance to sample some of the Waldorf Astoria’s classic dishes made kosher. These included Eggs Benedict (made with smoked salmon instead of ham); Waldorf salad topped with chicken breast; veal cheeks with truffled mashed potatoes; and pumpkin soup with celery froth. Every guest was sent home with a classic red velvet cake with creamcheese frosting – a sumptuous ending to an intriguing meal.

THE SEVEN SPECIES
Serves 4 to 6 For the fish
✔ 4 sea bream fillets
✔ 2 whole eggplants
✔ 1 sourdough baguette (about 100 gr.)
✔ 4 thyme leaves
✔ 2 lemons
✔ 10 gr. fennel seeds
✔ Salt and pepper
✔ 1 cup olive oil For the bulgur salad
✔ 40 gr. bulgur
✔ Seeds of 1 pomegranate
✔ 4 dates, diced
✔ 40 gr. pumpkin, diced
✔ 4 pears, peeled and diced
✔ 20 gr. parsley leaves
✔ 20 gr. mint leaves
✔ 1 Tbsp. yuzu juice
✔ Juice from 1 lemon
✔ 1 small fresh hot pepper, finely diced
✔ Salt and pepper
✔ 1 cup olive oil
✔ Water For the sauce
✔ 40 gr. tehina
✔ Juice from 1 lemon
✔ Salt and pepper
✔ 1 cup olive oil
✔ 1 cup ice water For decoration
✔ 1 radish
✔ 1 yellow zucchini
✔ 1 carrot
✔ 1 cucumber
✔ 1 fennel
✔ 1 lemon
✔A few drops yuzu juice
✔ Salt and pepper
✔ 1 Tbsp. olive oil Soak the bulgur in room temperature water for about 30 minutes.Roast the eggplant over high heat for about 5 minutes on each side, until it is soft and charred. Cut the heads off both eggplants. Peel one of them and leave the other one with the charred skin intact. Cut them both into cubes, and put them all into a blender. Add ½ cup of olive oil and the juice of 2 lemons, plus salt and pepper to taste. Blend at high speed until the mixture is smooth.Drain the bulgur. Dice the parsley and mint leaves. Season the pumpkin cubes with thyme, salt, pepper and olive oil, and fry them in a pan over medium heat for about 3 minutes until golden brown.In a small bowl, mix together the yuzu juice, lemon juice, salt, pepper, chili pepper and olive oil.In a separate bowl, mix the bulgur, pumpkin, dates, pomegranate seeds, pears, parsley and mint leaves. Add the yuzu dressing and toss to combine. Add salt and pepper to taste.Remove the skin from the sea bream, and cut it in half lengthwise, and then in half again to get 4 equal rectangles. Season the pieces with thyme, salt, pepper and olive oil. Spread the eggplant cream on one side of each piece of fish. Cut slices from the baguette that are the same size as the fish.Place a piece of bread on each slice on top of the eggplant cream.Fry the fish in a pan over medium heat for about 2 minutes – first bread-side up, then flip so the bread gets golden brown.For the sauce, mix together the tehina, lemon, salt, pepper, olive oil and ice water until smooth.Soak the vegetables for decoration in lemon, olive oil, yuzu, salt and pepper.To plate, spread a line of the tehina sauce on the plate. On top of the sauce, place the bulgur salad. Place a piece of fish alongside the salad. Roll up slices of the vegetables and place on the plate. Garnish with leaves of parsley and mint.