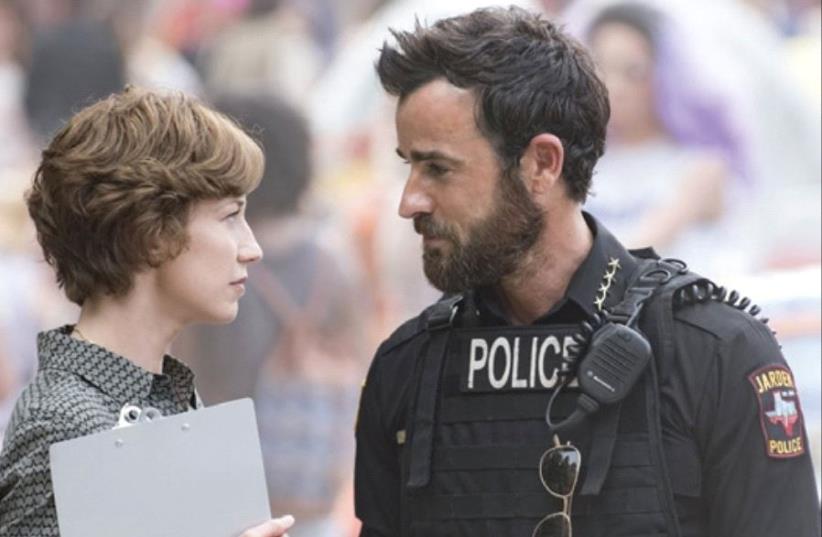 The Leftovers
(photo credit: PR)
Advertisement
1. ANIMAL MAGNETISM The film The Zookeeper’s Wife tells the true story of the heroic efforts made by Antonina and her husband, Dr. Jan Żabiński, to turn their bombed-out Warsaw zoo into a safe haven and route to freedom for some 300 Jewish men, women and children during the Holocaust. With Jessica Chastain, Daniel Bruhl, Johan Heldenbergh.

2. THE OVER-THE-HILL MOB Oscar winners Morgan Freeman, Michael Caine and Alan Arkin star in the caper comedy film Going in Style.Desperate to pay their bills and come through for their loved ones, three elderly lifelong pals risk it all by embarking on a daring bid to rob the bank that took their money.

3. A FALLEN FUTURE Based on Margaret Atwood’s best-selling dystopian novel, The Handmaid’s Tale is a new TV series starring Elisabeth Moss as Offred the Handmaid, and Joseph Fiennes as Commander Fred Waterford. It takes place in the totalitarian society of Gilead, ruled by a fundamentalist regime that treats women as property of the state and forces handmaids to bear children for the ruling class. Starts April 29 on HOT HBO and HOT VOD.4. LOST AND FOUND HBO presents the third and final season of its popular supernatural drama series The Leftovers. Three years after the disappearance of 2% of the global population, a group of people from New York struggle to continue their lives, while they cope with the tragedy of the unexplained nature of the event. Starts Tuesday on HOT HBO and HOT VOD.5. TELLING THE TRUTH British indie rock band White Lies will perform in Israel this week. Formed in 2004 under the name Fear of Flying, the band take sonic cues from the likes of Joy Division, the Teardrop Explodes, and Echo & the Bunnymen. White Lies’ debut album To Lose My Life..., released in 2009, hit number one on the UK Albums Chart. They released their second album, Ritual, in 2011. Buoyed by the single “Bigger Than Us,” the album hit number three in the UK and reached number 14 on the Billboard Top Alternative Albums chart in the US. Thursday, 8:30 p.m., Barby Club, Tel Aviv. For tickets: www.barby.co.il 6. TICKLING THE IVORIES As prestigious musical events go, the Arthur Rubinstein Piano Competition is up there with the best the world has to offer. This year, the 15th annual contest attracted applications from 173 pianists from around the globe, with 32 making it to the knock-out stages in Israel. The 32 pianists come from such diverse countries as China, Russia, Georgia and South Korea, with Tomer Gewirtzman, Yevgeny Yontov and Rafael Skorka representing Israel. Tuesday through May 11. For tickets: www.eventim.co.il/ arthur 7. GOING GAGA Ohad Naharin, the artistic director of the Batsheva Dance Company, will appear in a special event: a mass Gaga lesson for 800 to 1,000 people, with the assistance of the Batsheva dancers. Gaga is an innovative movement language developed by Naharin that emphasizes the exploration of sensation and availability for movement. It focuses on strengthening the body, increasing flexibility and speed and awakening imagination. Admission is NIS 60. Next Friday, 2 p.m., Hangar 11, Tel Aviv Port. For tickets: http://hangar11.co.il/events 8. JERUSALEM REBUILT Jerusalem’s Tower of David Museum is hosting a new series of tours in English that will take place at the museum every month. The series explores the architecture of the city. The first guided tour will explore Crusader architecture of art and intrigue. It will take participants from Mount Zion to the Church of the Holy Sepulcher, exploring the lives of the knights and kings, queen and bishops, as well as the daily lives of the pilgrims. Tickets cost NIS 90. Duration: 3 hours. Next Friday, 10 a.m. For more info: www.tod.org.il 9. BIEBER FEVER Canadian teen heartthrob Justin Bieber will perform at Hayarkon Park in Tel Aviv on May 3. Bieber, who last performed in Israel in 2011, is one of the world’s most popular singers, with a huge following, particularly among a younger audience. Ranked as the third most powerful celebrity in the world by Forbes magazine in 2012, Bieber was awarded Artist of the Year Awards in 2010 and 2012. He is best known for songs such as “Baby,” “Somebody to Love,” “U Smile” and “Sorry.” For tickets: www.leaan.co.il

10. WHAT’S UP, DOCAVIV? The 19th edition of Docaviv, the Tel Aviv International Documentary Film Festival, will take place at the Tel Aviv Cinematheque from May 11 to 20. The festival will open with Dafni Leef’s film of her experiences during the 2011 social protests, Before My Feet Touch the Ground. On offer will be 117 new documentaries with such diverse topics as international terrorism, music and true crime. There will be master classes led by international filmmakers, as well as professional forums and discussions about current events. For more info: www.docaviv.co.il
Advertisement
Subscribe for our daily newsletter