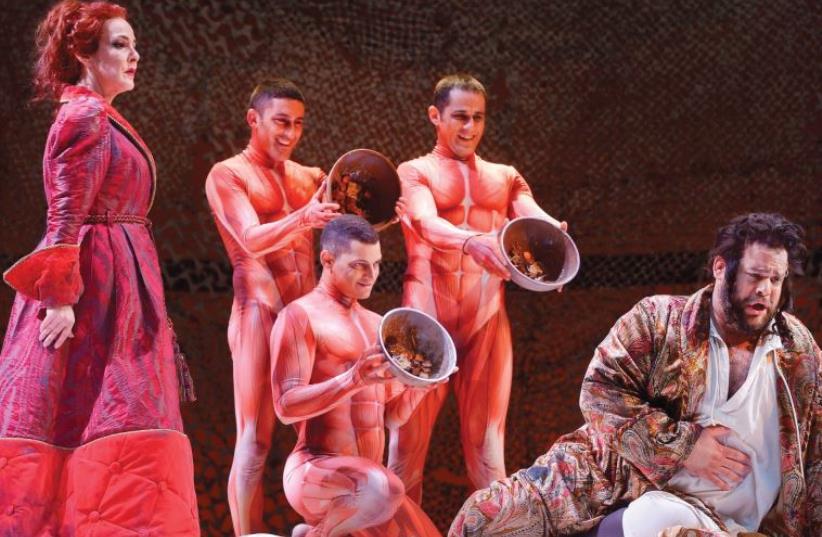 World premiere of two original operas, in the debut of ‘From Agnon to Levin,’ at the Israel Opera
(photo credit: YOSSI ZWECKER)
Advertisement
1. A HOST OF FILMS
The 32nd annual Jerusalem Film Festival opens today (Thursday) at the Sultan’s Pool with the film Mia Madre, starring John Tutrurro, who will be in attendance.The festival will screen 200 Israeli and international films over 10 days, hosting many of the films’ creators.July 9 through 19 at the Sultan’s Pool and the Jerusalem Cinematheque. For more information, call *9377; www.jff.co.il. 2. A ZOO WITHOUT BORDERS The BBC series Our Zoo will be aired on Channel 1. It tells the story of the Mottershead family, who founded the Chester Zoo in the 1930s, one of the most popular zoos in England. The six-episode drama is based on the true story of George, a former World War I soldier who decided to build the first zoo in England with no cages. Tuesdays at 10:05 p.m. on Channel 1.3. DOUBLE DEBUT In honor of its 30th anniversary, the Israeli Opera presents the world premiere of two original operas. In the debut of From Agnon to Levin, two original Israeli productions share one stage.The first is an opera composed by Haim Permont, based on S.Y. Agnon’s story “The Lady and the Peddler.” The second opera was composed by Yoni Rechter, based on Hanoch Levin’s play Schitz.Thursday at 6:30 and 8 p.m. and Friday at 1 p.m. at the Opera House in Tel Aviv. For tickets, call (03) 692-7777.
4. LEADERS OF THE DANCE The Dance Arena Festival of the Interdisciplinary Arena in Jerusalem has set the stage for new works by the country’s top choreographers since 2001. The festival features seven new works within four programs, as well as workshops and sessions with leaders from different fields of art. Tuesday through Thursday from 8 p.m. to 10:30 p.m. at Beit Mazia Theater, 18 Mesilat Yesharim St., Jerusalem. For more information, call (02) 678-3378; www.hazira.org.il.
5 MUSIC THE TRUMPET OF A GENERATION According to the Wall Street Journal, Bria Skonberg is “one of the most diverse and impressive musicians of her generation.” The trumpeter, vocalist and composer performs in the Hot Jazz series, accompanied by local musicians. Thursday at 9 p.m. and Friday at 9:30 at the Tel Aviv Museum of Art. Saturday at 11 a.m. at the Tel Aviv Museum of Art (“Trumpet Princess” performance for children) and 9 p.m. at Beit Abba Khoushy in Haifa. For Tel Aviv tickets: (03) 573-3001. For Haifa tickets: (04) 822-7850.
6. DIVERSITY ROCKS The Subterranean Masquerade rock band begins its world tour in Israel, launching its new album The Great Bazaar. Founded by Tomer Fink, the band integrates many cultures and musical styles, with one member from Norway and the rest Israelis. Thursday at 9:30 p.m. at the Tmuna Theater, 8 Soncino St., Tel Aviv. For tickets, call (03) 561-1211.
7. BLACK LIGHTIn his work, photographer David Adika uses the medium to ask questions related to his identity as an artist of Sephardi background. The Museum of Photography Tel Hai hosts his exhibition “Last Light,” which focuses on that aspect through themes of color. Monday through Thursday from 8 a.m. to 4 p.m. at the Museum of Photography, Tel Hai. Until June 2016. For more information, call (04) 681-6702.
8. REMBRANDT FROM AMSTERDAM AND JERUSALEM Jeremiah Lamenting the Destruction of Jerusalem, an exquisite painting by the young Rembrandt produced during his Leiden period, is on loan from the Rijksmuseum, Amsterdam, for the Israel Museum’s 50th anniversary. The painting is displayed next to the museum’s own Rembrandt masterpiece St. Peter in Prison. Israel Museum, Jerusalem. For more information, call (02) 670-8935.
9.  STREET FASHIONDutch photographer and journalist Kjeld Duits, who has been living in Japan since 1982, launched an English- language website in 2002 called “Japanese Streets,” which depicts Japanese street fashion. Duits is in Israel to accompany his exhibition, which documents the eclectic, impulsive and avant-garde fashion worn in Japan. Sunday through Thursday 10 a.m. to 4 p.m., Fridays and holidays 10 a.m. to 1 p.m. and Saturdays 10 a.m. to 3 p.m. at the Tikotin Museum for Japanese Art in Haifa. For more information, call 1-599-502-211. 10. SWEET SONGS The Open Museum Tefen is hosting the show “Mister Shoko” (chocolate milk), based on songs by singer-songwriter Arik Einstein. The show is performed by The Oranges, an ensemble of musicians who enjoy hiking in Israel and singing Einstein’s best-loved songs. July 11 at 6 p.m. at the Open Museum, Tefen Industrial Park. For tickets, call (04) 987-2022; (04) 910-9609.
Advertisement
Subscribe for our daily newsletter