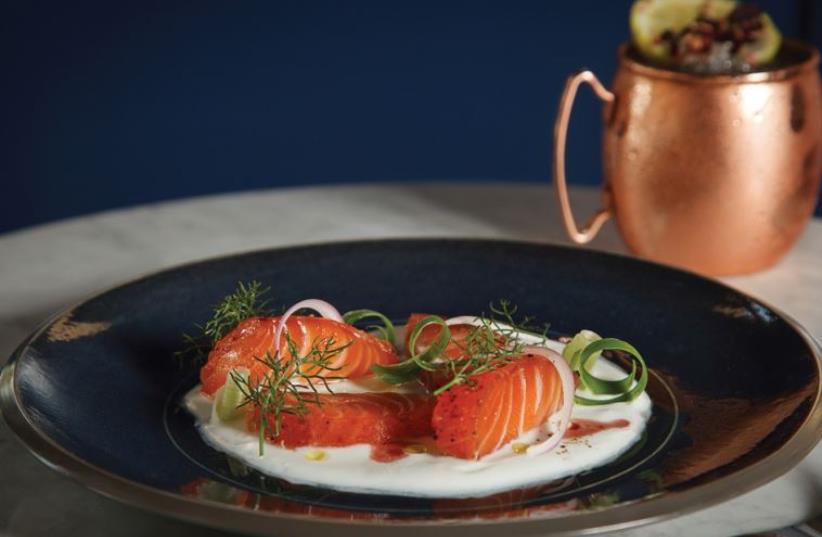 'Double Standard' restaurant
(photo credit: PR)
Advertisement
Situated at the corner of Dizengoff and Nordau streets, Double Standard is the latest addition to Tel Aviv’s buzzing cocktail scene. The bar doubles (hence the name) as a sophisticated mixology shop during the day, selling chic cocktail-making equipment (noon to 5 p.m.), and a cool, vibey cocktail bar and restaurant at night (from 6 p.m. on). The duo behind Double Standard are renowned Israeli mixologist and bar consultant Yuval Sofer and Yotam Shilo, who also owns Spicehaus (another popular cocktail bar on Dizengoff).The bar area of Double Standard is relatively small, with a laid-back feel that makes it easy to chat with a neighbor. The people working behind the bar are mixologist-bartender hybrids of the highest caliber. Our bartender was very knowledgeable, personable and gave us great background information about each selection. The cocktail menu is divided into four sections: Signature, Barrelaged, Classic Mules and Classics.We started off with some intriguing cocktails. I tried The Charmer (NIS 48), which consisted of garlic- and dill-infused vodka, red and yellow bell peppers, lime and four seasons peppercorn. What a great drink! It really sent my taste buds on a trip from sweet to spicy. If you’re a vodka drinker and want something light and refreshing, this is a great choice.My dining companion ordered the Princess Leia (NIS 48), which was comprised of Bombay sapphire, absinthe, grenadine and yuzu. When the cocktail arrived, we clapped our hands in delight, as it came sprinkled with Campari dust in the shape of Princess Leia’s iconic cinnamon bunlooking hairdo from Star Wars.Double Standard’s chef Sabina Veldman (who finished third on the popular Israeli TV cooking show Game of Chefs) combines high culinary standards with a hominess and an authenticity. The menu is eclectic but with a Mediterranean touch, and it’s clear that careful thought is put into each dish to produce esthetic, creative and flavorful results.We began with the Caprese salad (NIS 38), which consisted of feta cheese (from the Hameiri Safed Dairy) and a wonderful blend of cherry tomatoes and Kalamata olives. It’s amazing that so much flavor can come from such simple ingredients.This was followed by slices of salmon sashimi served on a bed of goat yogurt (NIS 48). This was a whirlwind of sauces and flavors, competing with the delectable raw fish. I’m not sure where they source their fish from, but the quality was exceptional.In between, we were treated to some more creative cocktails, such as the Jasmine Sour (NIS 42). We also tried two handcrafted barrel-aged cocktails – Negroni and Rob Roy – which can be bought in 200 ml. bottles and are ready to serve over ice. Both were fantastic and unique.Our main course consisted of crumbed lamb chops (NIS 94) with a side of potato gratin and spinach. They were delicious and had the right amount of spice. They were very tender as well. I could eat those every day! Last, we were presented with two tasty and juicy beef short rib sliders served with crunchy sweet potato strips.To satisfy our sweet tooth, we had the banana banshee cocktail (NIS 44), which was made up of Bacardi, banana, condensed milk, coffee, chocolate bitters and grated cocoa beans. Need I say more! Double Standard is a classic after-hours place to go. The crowd always changes, and the alcohol keeps flowing. Pricing is steep but very fair; by no means exorbitant for the caliber of the cocktails, especially considering the location. I think that Double Standard, with its delightful atmosphere, good food and drink, will be around for a long time to come.