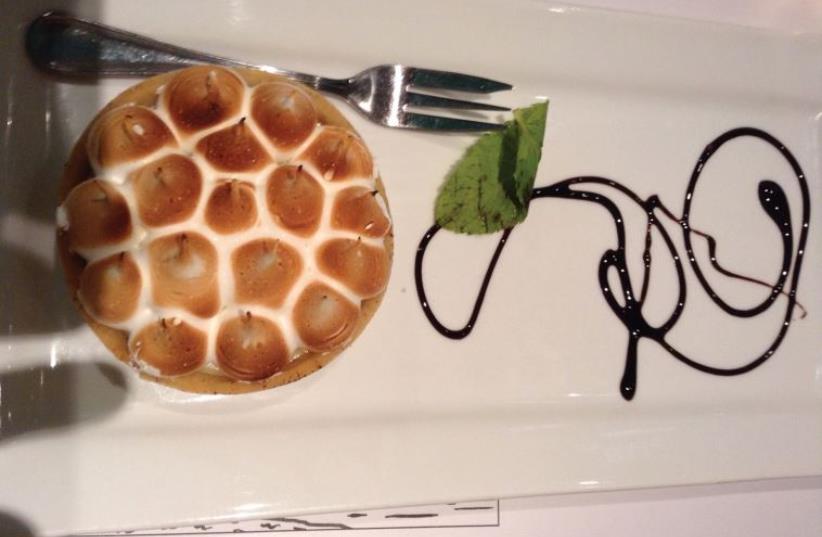 The Red Heifer restaurant in Jerusalem
(photo credit: PR)
Advertisement
Sometimes I get the feeling that the mehadrin community is keeping a secret from the rest of us. I talk a lot with friends, family and acquaintances about restaurants in Jerusalem, but when the subject of steak comes up, hardly anyone mentions The Red Heifer. Yet not only has it been a local fixture for years, but whenever I go there, it is almost full. So it’s time to spread the word: The Red Heifer is a fine dining experience that anyone would enjoy.The restaurant’s triple pedigree is impressive. The beef is topnotch, from a family that knows its meat.The Red Heifer is a sister restaurant to Wolf & Lamb in New York. The chef, Levi Laine, earned his bona fides by training under David Biton, who reigns at the King David’s La Regence, where Laine served as grill master. And the kashrut supervision is badatz mehadrin under the supervision of Ravi Rubin. Among the circles that comprise the bulk of The Red Heifer’s clientele, that is saying something.The hospitality of proprietor Yossi Wuensch is manifest in the excellent and friendly service. And his chef, who just returned from three months of “continuing education” in Italy, brought with him the highest quality balsamic vinegar to incorporate into the restaurant’s summer menu.“Our kitchen makes everything from scratch,” Laine declares. “Not only the sauces, but even the condiments, such as ketchup and mayonnaise.”Laine started us off with an appetizer that heralds the summer season: beet carpaccio (NIS 59) in a balsamic dressing with tiny slivers of jalapeno pepper to give it some kick. It was tasty, refreshing and not filling, stimulating the taste buds for the ensuing courses, which were all going to be meat-centric.A basket of bread was served: toasted seeded rolls with a light spread of olive oil and a hint of garlic. Mindful of the largesse to come, we were resolved not to fill up on it.For appetizers, we had spring rolls (NIS 75) and chopped liver (NIS 65). The spring rolls were recommended by the waitress, but what sold me was the unusual filling: chopped rib eye. Evidently, choice cuts are used even in dishes where the kitchen could get away with less expensive alternatives.The chicken liver had a creamy consistency, and the flavor was enhanced by the sweetness of caramelized onions and onion confit, which were nice counterpoints to the richness of the liver.You know you’re in a steakhouse run by a grill master when the menu contains a table that describes exactly how the meat will be cooked once you convey your preference. The guide runs the gamut from black-and-blue (the steak seared on a high flame to give it a brown crust but otherwise barely cooked inside) to well done (not recommended with beef of this quality) and every gradation in between.The waitress asked us whether we preferred our steaks lean or marbled. We opted for one in each category: My companion ordered the classic rib eye (marbled) (NIS 179), while I chose the filet mignon (NIS 179). I ordered mine medium, and my companion requested medium rare.The rib eye (not bone-in: none of The Red Heifer’s cuts are) was exactly as described: pink at the edges and red in the middle. My filet was picture perfect: a light outer crust, and pink inside from top to bottom. Needless to say, both steaks were juicy and delicious.For side dishes, we had a green salad (NIS 39) and mashed red bliss potatoes (NIS 35), which went ideally with the steaks.Other main dishes on the menu include pasta, chicken and fish.There are also lighter meat alternatives, such as The Red Heifer burger (made from ground rib eye) and assorted sandwiches.The wine list is totally Israeli, each bottle certified with Rav Rubin’s private seal of strictest kashrut. In accordance with this standard, only one wine has been designated as the house red to be served by the glass (one that is m’vushal): a very pleasant Cabernet-Merlot blend from Carmel’s Chateau Rouge label (NIS 28). But there is a more than adequate selection available by the bottle, including some superb vintages (priced accordingly) from Yatir.Desserts feature the classic favorites, from which we indulged in the chocolate fudge cake and the lemon meringue pie (both NIS 45).The former is truly in the ultra-rich, death-by-chocolate tradition, while the latter is a feast for the eyes as well as the palate, although diners more familiar with the American version will likely find this European-style lemon tart quite different.The guesswork is taken out of tipping here, as a 15% gratuity is added to the bill.