Whisky Live was the perfect exhibition of the growing whisky industry and appreciation in Israel.

By CHAYA EISENBERG
MARCH 16, 2018 12:27
Whisky Live 2018
(photo credit: CHAYA EISENBERG)
Advertisement
For the fourth time, Tel Aviv hosted the world’s largest whisky exhibition, Whisky Live. The event is associated with England’s Whisky Magazine and has more than 30 exhibitions a year, touring with whiskies from over a dozen countries.Taking place on the roof of the Azrieli Mall, the event provided a relaxed atmosphere in the pleasant sunshine of the afternoon, transforming it into a bar-like feel with music and lights at night.Tomer Goren, head distiller at Israel’s first whisky distillery, Milk and Honey, managed the event, as well as exhibiting Milk and Honey’s whiskies and gins. Among the many international distilleries, three Israeli distilleries were showcased: Milk & Honey, Golan Heights and the soon to open Jerusalem Distillery.Each Israeli distillery had something unique to offer the crowd.Milk & Honey served two whiskies directly from the casks, one from a red wine cask and one from a bourbon cask. Shaking it up a bit, they also had two gins on offer, one of which was oak cask aged. 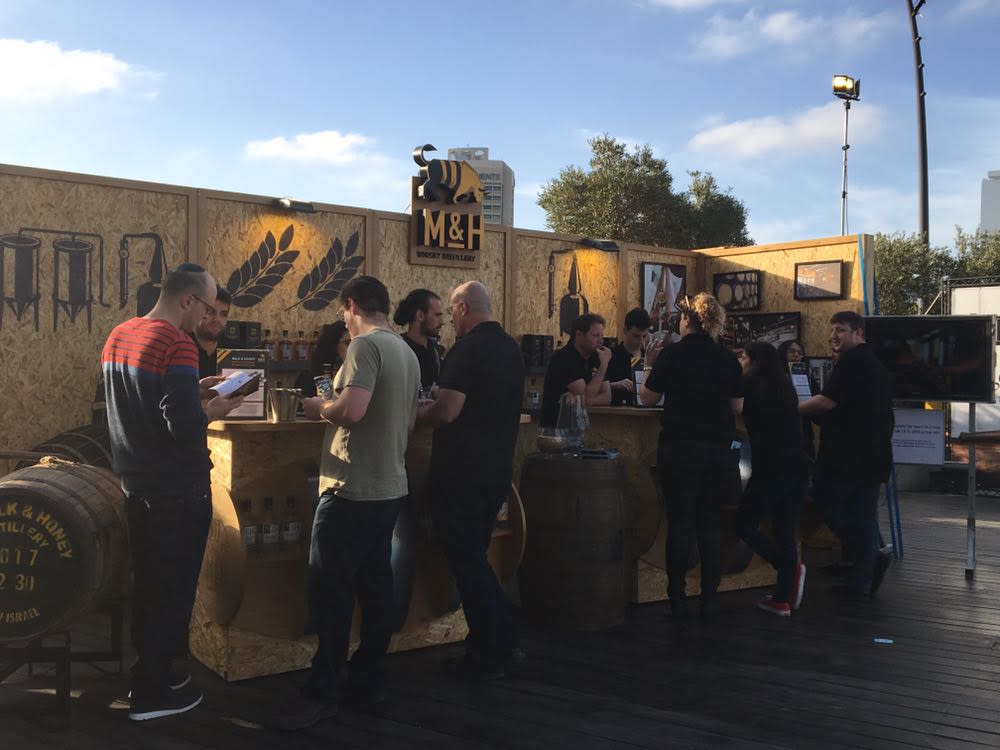 Milk & Honey Distillery at Whisky Live 2018The Golan Heights table was being manned by Alona Sadovski, the president of the distillery, and David Zibell, the CEO and master distiller. They provided a unique experience, especially to craft beer aficionados, offering two whiskies distilled from Israeli craft beer, one of which was a spicy chickpea beer that had both whisky lovers and beer lovers delighted.Last but not least, the fledgling Jerusalem Distillery, set to open soon in the capital, was giving tastings of Boukha, a Tunisian fig-based liquor; gin, two types of rum; and their pre-cask peaty whisky, which was clear in color and unique in taste.Among the whiskies never before tasted in Israel were the Jack Daniel’s single barrel rye, Macallan single barrel and a range of delights from Stilnovisti, an investment company that distills in Scotland and allows you to purchase your own cask.The event was not just enjoyable, but also informative, as guests could buy tickets to any of a varied series of workshops and lectures. For the more casual visitors, a chat with the experts staffing many of the stands provided more than enough to learn and expand one’s whisky knowledge.Whisky Live was a perfect example of the burgeoning distilling life in Israel, in terms of both production and consumption.