Editors of an essay collection about Israeli control over Palestinians in the West Bank shared an essay with the residents of the village of Sussiya. 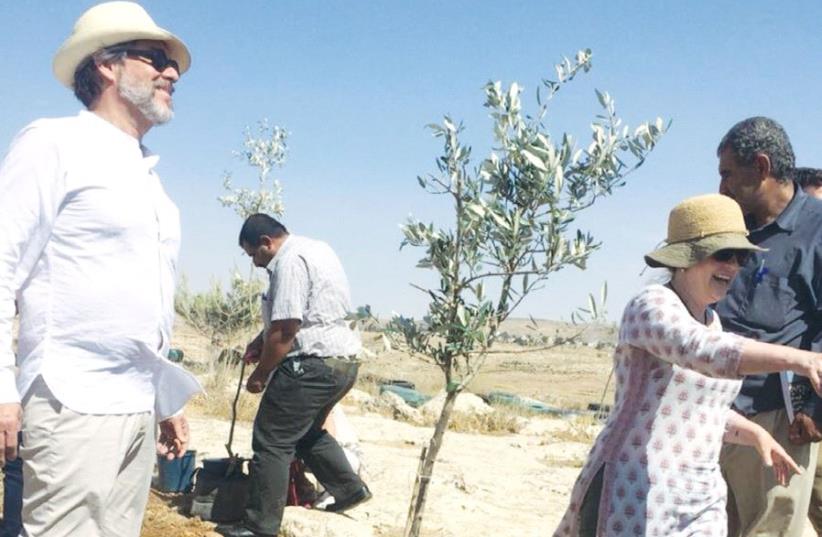 Husband and wife American novelist and short story writer Michael Chabon (left) and Israeli-American novelist and essayist Ayelet Waldman plant a pomegranate tree in Sussiya, in the southern Judaean Mountains, on Wednesday.
(photo credit: SOPHIE SCHOR)
Advertisement
Renowned American authors Ayelet Waldman and Michael Chabon accompanied a group of Israeli writers and activists to the village of Sussiya in the South Hebron Hills, as part of a week of events marking the release of an anthology about Israeli control over Palestinians in the West Bank.Chabon, Waldman and Moriel Rothman-Zecher edited the essay collection, Kingdom of Olives and Ash: Writers Confront the Occupation, just published by Harper Perennial in the US. The book is available in English, Arabic and Hebrew.It features essays by such writers as Colum McCann, Jacqueline Woodson, Colm Toibin, Geraldine Brooks, Dave Eggers, Hari Kunzru, Raja Shehadeh, Madeleine Thien, Assaf Gavron and Nobel Laureate Mario Vargas Llosa, as well as Chabon and Waldman.All the writers had visited the area in the past on trips initiated by Waldman and Chabon and guided by the NGO Breaking the Silence, a group composed of former soldiers who speak, mostly anonymously, about their experiences in the West Bank and the Gaza Strip during army service. In early June, there were readings and events to mark the publication of the book throughout the US.Waldman and Chabon, who are married and have four children, may be America’s premiere literary couple, but Waldman is originally Israeli. She was born here and lived in Israel as a child.Her brother Yosef Ya’ari was awarded the Medal of Distinguished Service for his courage during the Yom Kippur War.She has written several novels, including Love and Treasure, about the theft of jewels and art during the Holocaust, as well as nonfiction such as Bad Mother and, most recently, A Really Good Day. Chabon is the Pulitzer Prize-winning author of many books, including Wonder Boys, The Amazing Adventures of Kavalier & Clay and The Yiddish Policemen’s Union.

In Sussiya on Wednesday, the group met with village residents and listened to them talk about their long-running legal battle to get back land confiscated by Israel for use as a settlement and archeological site. Waldman read an essay from the book by Madeleine Thien about visiting the village and Nasser Nawaja, a Sussiya resident, read the essay translated into Arabic.Following the reading, the group accompanied villagers to the local school, where they planted trees on an adjacent windswept hill.Waldman said she got the idea for the project when she visited Israel in 2014 for a writers’ festival, after she had not been here for many years.The outspoken and political Waldman said that the tree planting brought back memories for her.“My whole life, every year on my birthday, my savta [grandmother] would give me a tree in Israel; that was part of my present... from the Jewish National Fund. I never saw them. All I knew was I had my little certificates.This is the first time in my life I actually a planted a tree I care about. And it’s in the Hebron Hills. And it’s this little pomegranate tree that I hope lives long enough to see the end to this vicious occupation.”As they watered the trees with buckets of well water, Chabon said he was moved to be back in Sussiya, where he and the other writers had visited a year-and-a-half ago, and that he hoped that following the publication of the book, “people will begin to start paying attention to what’s going on here.”