No baker’s arsenal is complete without a rising agent than in the subsequent dry forms. 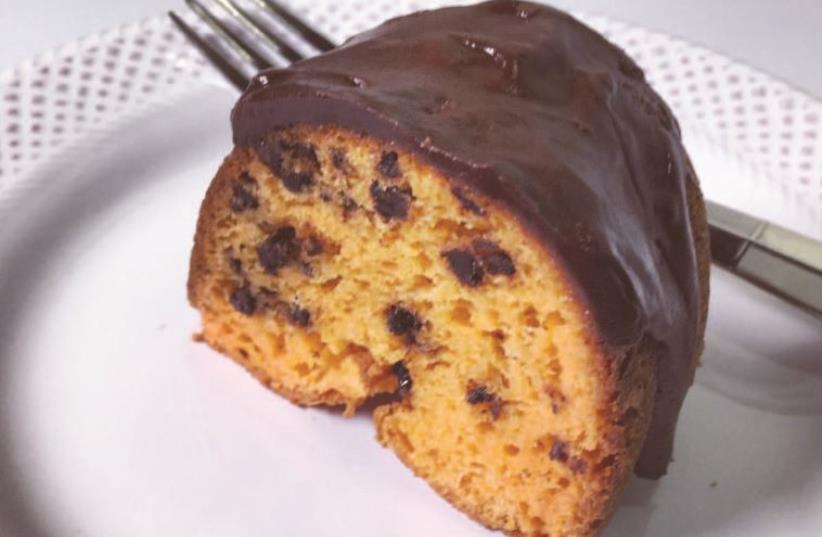 Chocolate chip cake.
(photo credit: TNS)
Advertisement
The more recent instant dry yeast is intrinsically the same as fresh yeast, except that the yeast has been further dehydrated and encapsulated in a layer of dead yeast cells and some growth medium, which allows the living, encapsulated cells to remain viable. These are generally vacuum packed to remove any air. The resulting effect is viable yeast with a much extended shelf life but with fewer viable cells than fresh yeast. Instant dry yeast usually contains an emulsifying agent such as sorbitan monostearate, which allows it to mix easily in the dough.We also find specialized forms of yeast, like osmotolerant yeast, which tolerates high percentages of sugar in the dough.Another type of specialty yeast is rapid-rise yeast that provides an increased fermentation rate. There are other specialty yeasts such as yeast used for frozen dough, etc.The primary difference between baker’s yeast (in any of its forms) and sourdough yeast is the speed of fermentation. Since baker’s yeast is highly concentrated and contains a specific strain that has been found to optimally ferment bread dough, the rising time is much quicker than sourdough, typically five or six times faster. In this lies both the advantage and disadvantage of baker’s yeast.The accelerated rising time is a boon both for home and especially for commercial bakers, allowing them to manufacture more bread in a shorter time. Another advantage is that due to the relatively short fermentation process, the bread does not taste sour (as with sourdough yeast). This is beneficial for any baked product where sourness is a liability, such as croissants, yeast cakes, most types of halla, etc.The flip side, the disadvantage of baker’s yeast, is that the yeast itself provides little or no flavor to the bread. This is most noticeable in whole-grain, hearty loaves such as rye bread, where the sour taste is essential to the flavor. For this type of bread, sourdough is preferred.Which type of baker’s yeast is best? Some people will use nothing but fresh yeast, steadfastly claiming that it performs better. Others prefer the flexibility and extended shelf life of instant dry yeast. In my experience, both these types perform equally well and the differences are almost unnoticeable, as long as both are still viable.To test the viability of both fresh and dried yeast, simply mix the yeast with some water and sugar. If froth forms after a few minutes, the yeast is viable. If not, it must be discarded.Viable yeast may be added directly to the dough ingredients. The reason many bread recipes instruct to mix the yeast first with water and either sugar or some flour is not because the yeast performs better when it is premixed in this way but simply to check its viability.Finally, a few health considerations.Some people are allergic to baker’s yeast – i.e., to the specific strain of Sacchararomyces cerevisiae. Others may be allergic to the rehydrating agent in instant yeast, sorbitan monostearate. In either of these cases, dietitians recommend using sourdough yeast instead of baker’s yeast.Another point: Baker’s yeast is not the same as brewer’s yeast. Many people use brewer’s yeast as a food supplement as a source of B-complex vitamins. Baker’s yeast cannot be used for this purpose.Baker’s yeast is undeniably an essential tool for the baker when used in the right context and for the right purpose.CHOCOLATE CHIP YEAST CAKE ✔ 2 cups flour
✔ ½ cup milk (soy/rice milk for parve)
✔ ¼ cup sugar
✔ 1 pinch of salt
✔ 1½ tsp. instant dried yeast
✔ 1 egg
✔ 50 gr. butter (margarine for parve)Mix all ingredients and knead for 10 minutes. Leave to rise for 1 hour. Punch down and roll into flat rectangular shape, approximately the length of a loaf pan.Sprinkle chocolate chips over the surface of the dough and roll up like a jellyroll. Pinch ends and place in a greased loaf pan. Leave to rise for 45 minutes. Baste with egg wash.Bake for 35 to 45 minutes at 180° until well browned. Let cool and serve. Master baker Les Saidel is CEO of the Saidel Artisan Baking Institute (www.saidels.com), which specializes in training and education in the field of organic, healthy, artisan baking and the inventor of Rambam Bread. He also lectures and works as a consultant in the fields of cereal chemistry, health and nutrition.
Advertisement
Subscribe for our daily newsletter