Doing headstands where the ‘Altalena’ sank

A STATUE OF David Ben-Gurion shows Israel’s first prime minister doing a headstand on Frishman Beach in Tel Aviv.
(photo credit: WIKIMEDIA)
Advertisement
One of Tel Aviv’s most popular photo spots is a statue on Frishman Beach of Israel’s first prime minister David Ben-Gurion standing on his head, which he began to do in the 1950s as part of his daily Feldenkrais Method exercises. The Tel Aviv Municipality put up the funny statue in 2015, and it’s likely that few of the people taking selfies with “the old man” realize that right behind it is the site of one of the seminal events of Israel’s early history.A few meters from where Ben-Gurion is memorialized upside-down, where Frishman turns into Bograshov Beach, is an older, fading memorial that may remind them that right on those shores is where, in 1948, the IDF sunk the Altalena, a ship of Irgun fighters – some of whom had escaped the horrors of Europe – on Ben-Gurion’s orders.The Altalena’s arrival on Israel’s shores from France had been planned in advance by the Irgun. Because the various Jewish militias operating at the time began to be absorbed into the IDF, then-Irgun commander and eventual prime minister Menachem Begin reported the plans to the provisional government led by Ben-Gurion.The sides disagreed as to how most of the weapons should be distributed, but did agree that 20% of them could go the Irgun in Jerusalem, where it was still fighting separately.As the ship approached Kfar Vitkin, Ben-Gurion made the unsubstantiated claim that Begin was trying to form a separate army to undermine the IDF. He said that if Begin did not surrender all the weapons – including those meant to go to Jerusalem – the IDF should open fire. And that is what happened. Begin and the others escaped the IDF fire by boarding the Altalena, which then sailed on to Tel Aviv.In Tel Aviv, Ben-Gurion ordered that the Altalena be shelled and eventual prime minister Yitzhak Rabin commanded the forces on the shore. 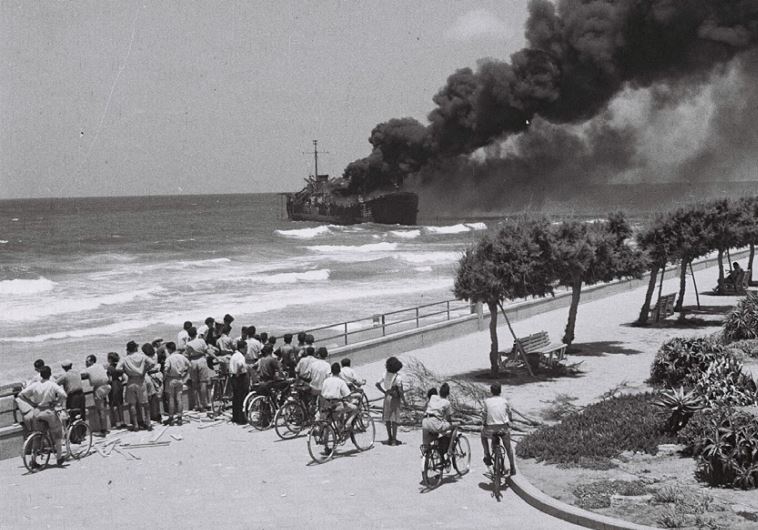 The shelling of the Altalena (Courtesy)
Hillel Daleski, who at the time had recently emigrated from South Africa and who later won the Israel Prize for Literature, at first protested, but opened fire on the ship, eventually sinking it. Some other soldiers present refused to shoot at the Altalena.Menachem Begin ordered the Irgun not to shoot back and had the white flag raised in order to avoid a civil war. After escaping the ship, he once again ordered on the Irgun radio station that there cannot be a civil war and that his men should not retaliate. Sixteen Irgun fighters and three IDF soldiers were killed in the Altalena affair.For many, the Altalena is still an open wound nearly 70 years later. It is also the most extreme example of how Ben-Gurion worked for decades to delegitimize the nascent Israeli Right, known then as the Revisionists.Yet in 2015, the Tel Aviv Municipality placed a funny statue of Ben-Gurion in direct view of the memorial to the men who perished rather than in any other location along the boardwalk. In fact, the municipality responded to a Jerusalem Post inquiry on the matter saying it did not intend to put them near each other.“The memorial to those killed on the Altalena is in the place where it sunk, and the statue of Ben-Gurion is on the beach in a place he would visit,” the municipality spokesperson’s office stated.As for the reason they put up a statue based on the famous photo of Ben-Gurion on his head, the municipality said: “The statue has two purposes: The first is to encourage the public to visit Ben-Gurion’s house that is not far from there [near Gordon Beach], and to market the City of Tel Aviv-Yafo on social media through tourists who stand on their heads and post the photos online.”On the Right, politicians and educators did not take offense at the juxtaposition, but their responses betrayed how much the Altalena still resonates with them.Tourism Minister Yariv Levin’s godfather was Menachem Begin. His uncle, Eliyahu Lankin, commanded the Altalena, even though he didn’t know how to swim.Levin said: “I have a lot of respect for Ben-Gurion. Unlike what [Ben-Gurion’s party] Mapai did over the years, trying to erase the Revisionists’ part in building the state, I think that he has his merits, and I’m not trying to minimize his role.“I’m for memorializing both, just make sure to tell the full story,” he added. “In the end, with the Altalena, there were those... who were shot and who weren’t trying to sink a ship. Blurring that will not succeed.”During the 2009 to 2013 Knesset term, Levin pushed for the Altalena to be taken out of the sea and set up as an official memorial on land.Then-defense minister Ehud Barak released the Israeli Navy’s archives on the matter. The government searched for the ship in the location to which Ben-Gurion wrote that it had been dragged after commanding that the shipwreck be moved out of sight from the beach. However, the ship was not actually where the documents said it would be.“Ben-Gurion didn’t just sink it, he made sure it wouldn’t be found,” Levin lamented. “Now, we’d need the kind of equipment used to search for oil to find it, which has massive costs. That’s where we are now. I think one day we’ll get closure and the ship will be brought to shore, as it should have been to begin with.”Jabotinsky Center director-general Yossi Ahimeir gave the Tel Aviv Municipality the benefit of the doubt over the juxtaposition, pointing out that a new memorial to the Altalena was dedicated in the Nahalat Yitzhak Cemetery in 2016. The new memorial features the Menachem Begin quote, “There will never be a civil war.”Still, Ahimeir saw a sort of poetic justice to having Ben-Gurion do a headstand where the Altalena sank, because, in his eyes, the prime minister’s behavior was upside-down.“Ben-Gurion really did, in a sense, stand on his head. He did the wrong things. He could have prevented a civil war because he knew the Altalena wasn’t there to rebel or start a separate army. It was just about revenge on the Irgun... Ben-Gurion was just looking for Begin. He may have even wanted him killed. Luckily, Begin jumped into the sea and was saved,” Ahimeir said.Ahimeir characterized the Altalena shooting as one of many cases in which the pre-state yishuv establishment went to extremes to delegitimize the Revisionists and the Irgun. That includes the “hunting season,” in which Hagana fighters turned Irgun members over to the British and Begin said his canonical quote rejecting a war of Jews versus Jews and blaming high-profile Revisionists for the murder of socialist Zionist leader Chaim Arlozorov on the beach in Tel Aviv. Both the courts at the time and an official commission of inquiry in the 1980s found the accused Revisionists to be innocent, but neither the culprits nor their motives were confirmed.One of accused, Abraham Stavsky, who was convicted of murder by a district court in 1934 and then acquitted by the Supreme Court, was later killed aboard the Altalena.“Ben-Gurion libeled Stavsky for murder [on the beach], and then killed him in the exact same place,” Ahimeir recounted.Still, Ahimeir added, “We can’t take away Ben-Gurion’s great merit. Only he could have declared the establishment of the state, and he did it courageously, with great leadership. On the way, he did terrible things. Sometimes Ben-Gurion stood on two legs. But sometimes, he stood on his head.”