The Palestinian suspect was charged with severing gas pipes and attempting to ignite an explosion before fleeing the scene. 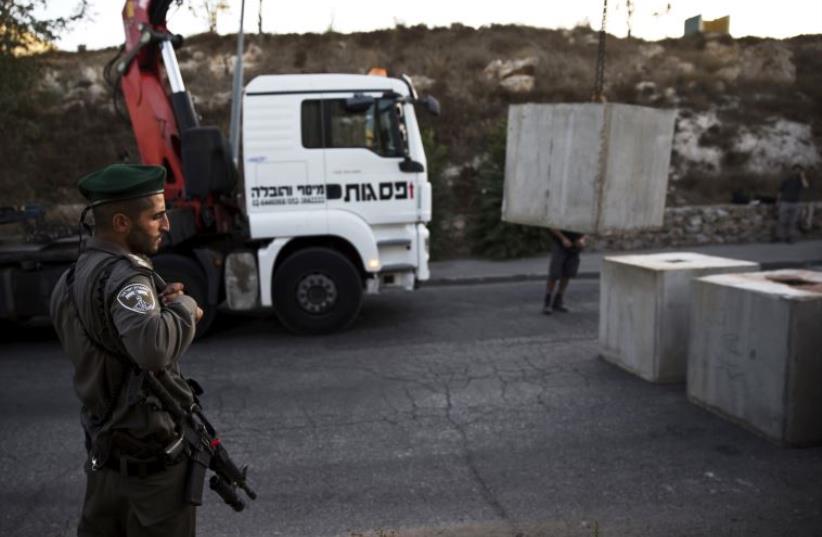 Border policeman stands next to a concrete barrier in Jabel Mukaber
(photo credit: REUTERS)
Advertisement
A Jerusalem Magistrate’s Court judge on Monday extended the remand of a Palestinian man from the east Jerusalem neighborhood of Jebl Mukaber arrested earlier this month for allegedly severing multiple gas lines at a capital pub and attempting to ignite an explosion.While details of the case were withheld from the public due to a court-enforced gag order, police spokesman Micky Rosenfeld said the incident took place at the Tzaatzua Pub in downtown Jerusalem, on the night of March 4.“A 30-year-old man from Jebl Mukaber cut a number of gas pipes at the pub, opened several gas canisters, lit a lighter and tried to cause an explosion before fleeing the scene,” he said on Monday. “As a result, police units and firefighters were called to the area after there was a strong smell of gas. It was clear that there was a gas leak and that the pipes were purposely cut.”After an investigation was opened by a police forensics team, the suspect’s fingerprints were found at the scene.“Several days after the investigation began, the suspect was identified and arrested,” Rosenfeld said. “He appeared before the court today, where a judge ordered his remand until further notice as the investigation continues.”Jebl Mukaber remains one of the most volatile Arab neighborhoods in the capital, as a disproportionate number of Hamas supporters and terrorists reside there.Indeed, a suspect from the neighborhood stabbed two Border Police officers stationed at the Old City’s Lion’s Gate early Monday morning and was shot dead, while the terrorist who murdered four IDF soldiers and wounded 17 others in neighboring Armon Hanatziv in January resided there.