The strike, which affects all schools in the capital, was organized by the Union of Parents in East Jerusalem Schools. 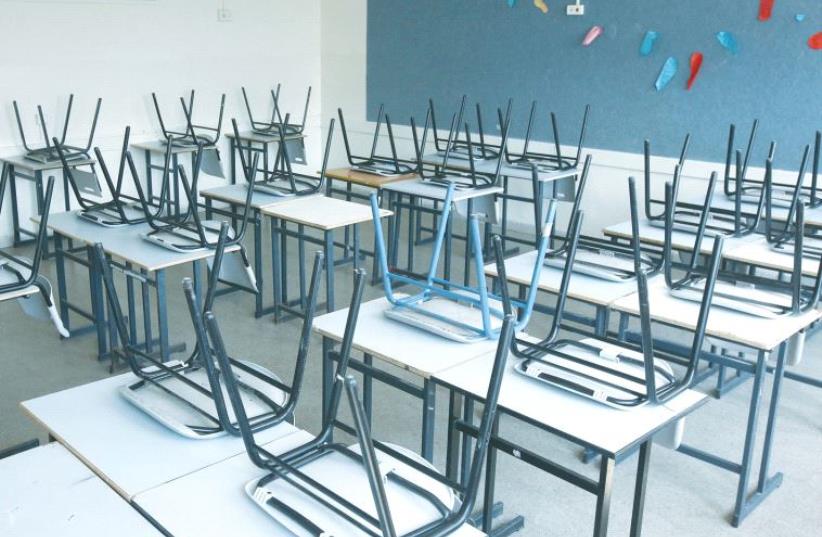 A CLASSROOM awaits its pupils.
(photo credit: MARC ISRAEL SELLEM)
Advertisement
Arab school personnel in east Jerusalem went on strike to protest the recent closure of a Hamas-funded elementary school in Sur Bahir and the government mandate that Arab schools close for one week during Passover.The strike, which began on Tuesday and was continuing, was organized by the Union of Parents in East Jerusalem Schools, which warned that long-term protests will be held if the government does not reverse its decisions.“The occupation of minds is no different from the occupation of land, and in our case, it is even more dangerous,” Zeyad al-Shamali, the head of the union, told Gulf News. “Israel’s proposed vacation would harm the students of the general secondary certificate stage, who have their own schedule for final exams.”Noting that the Education Ministry recently rejected the union’s petition to cancel the forced vacation, Shamali said, “We have no choice but to conduct protests to force the occupation to back down and rescind the decision.”“This is an uncompromising issue,” he added. “We call on all international legal and human rights organizations to show their support to our cause.”According to MK Jamal Zahalka (Joint List), Arab schools in the capital have a shortage of over 2,000 classrooms, despite the High Court’s demand in 2011 that more be built.“The shortage in the number of classrooms is growing at an alarming pace,” he told Gulf News, adding that “the conditions of education in occupied east Jerusalem are far worse than those of the West Bank or Gaza Strip.”Moreover, Shamali called for the reopening of the shuttered al-Nukhaba Elementary School, closed by Education Minister Naftali Bennett last month, following a joint probe by the police and the Shin Bet (Israel Security Agency), for incitement and an anti-Israel curriculum.Bennett said the school was operating without a license and actively indoctrinating its impressionable young students to support Hamas’s aim to destroy Israel.“My policy is clear and coherent,” he said. “Cases of incitement will continue to be treated with the utmost severity.”Bennett added: “As in the past year, the ministry will not hesitate to fire principals and teachers who [incite students], and we will not hesitate to close schools.”