ECONOMIC AFFAIRS: The battle against the coronavirus outbreak is being fought on two fronts: the hospitals and the streets.

By EYTAN HALON
APRIL 24, 2020 09:32
Jerusalem's idyllic Hutzot Hayotzer arts colony, at the foot of the Old City walls, has fallen silent
(photo credit: MARC ISRAEL SELLEM/THE JERUSALEM POST)
Advertisement
The quiet story of the man on the street during the coronavirus crisis has often been drowned out by heated television studio debates and prime-time declarations of generous financial aid packages.
That started to change this week, perhaps only briefly, as tears rolled down the eyes of 56-year-old Ashdod falafel shop owner Yuval Carmi on the evening news, preparing a meal for Channel 13 reporter Noga Nir Neeman.
Carmi has since been overwhelmed with delivery orders as Israelis, known for their solidarity, have rushed to support his business. The response was heartwarming.
Of course, the battle against the coronavirus outbreak is being fought on two fronts: the hospitals and the streets. Some semblance of normality returned to the latter earlier this week, as a limited number of stores were permitted to reopen their doors after weeks of gathering dust.
Other business owners are forced to remain patient, hoping for good news and some income. While small and medium-sized companies represent the lifeblood of the economy, representing 97% of all businesses, many are concerned that they won't have the assets to wait out the economic storm – especially as touted government aid has largely failed to materialize. For them, the toughest battles of the coronavirus outbreak are only just beginning.
Halper's Books, located on Tel Aviv's iconic Allenby Street, has been a permanent treasure trove of used and rare literature since it first opened its doors in 1991. Usually bustling with consumers, workers and tourists, Allenby Street has fallen silent in recent weeks. The store, known for its large collection of English-language books, was shut until this Sunday.
"The dress shops, restaurants and shoe shops are still closed, and it is a very eerie and depressing situation – I know all the owners personally," said owner Yosef Halper, who turned to Internet sales in recent weeks to continue operations.
"My store does have its loyal clientele. There was a big jump in demand for the first two days after I reopened the store, almost like regular days. Then it tailed off. There was an original euphoria and excitement, and now people are back to being depressed again."
Halper expresses cautious optimism that people "cooped up at home" might have exhausted their television and movie collections, and therefore embrace a "bit of a retro attitude toward books." At the same time, with unemployment soaring, people don't have much money to spend. Most purchases are made by credit card, rather than cash.
"Those stores that are still closed are really upset – there is a sense of resignation. There is a pizza place here that can only do deliveries, so people wait for their pizzas on the other side of the street – it is absurd," he said. "I am one month behind on my rent, but my landlord is a pretty decent guy. Other people are in serious trouble."
In Jerusalem, trade has been brisk at the Hanevi'im Street branch of mattress store Anak Hamizronim. The store, which reopened its doors on Monday, is located in an ultra-Orthodox neighborhood in the capital. There, telephone orders continued at pace despite the recent lockdown.
"There were a lot of emails and telephone calls, even from people in quarantine who wanted to order without even feeling the mattress first," said Laurent Sellem, an experienced employee at the store, who continued selling mattresses and other bedroom furniture from home.
"We placed advertisements in the newspaper, and there has been no real decrease in orders and a lot of people are now coming to buy. Some come to the shop without masks, but we don't allow them to enter."
For many family business owners, however, there remains little cause for optimism. Their financial fate and entire livelihoods remain in the hands of politicians and health experts. Slowly reopening the domestic economy offers little solace to thousands of businesses reliant on foreign tourism.
At the idyllic Hutzot Hayotzer arts colony, located at the foot of Jerusalem's Old City walls, the recent Passover holiday and the approaching summer are usually among the peak business periods for talented artists calling it home.
The colony – which celebrated its 50th anniversary last year – has known many difficult times, including two intifadas. No event has endangered the future of the colony and its studios, the dream of former mayor Teddy Kollek, like the coronavirus. 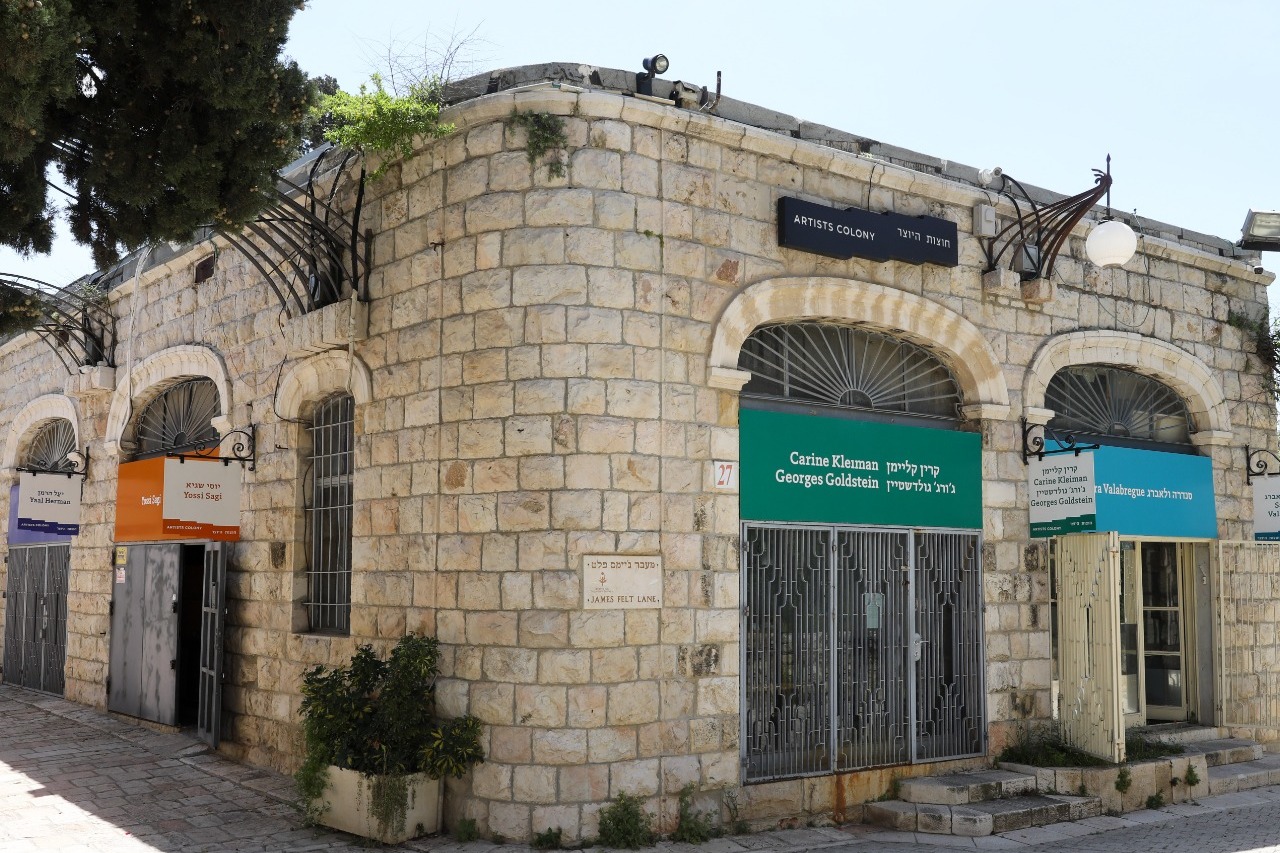 Carine Kleiman's shop at Jerusalem's idyllic Hutzot Hayotzer arts colony (Credit: Marc Israel Sellem)
Business has almost entirely dried up for Carine Kleiman, an artist making handwoven wool tallitot (prayer shawls) at Hutzot Hayotzer, and husband, Robert, a licensed real estate agent managing homes for tourists and nonresidents.
"When the hotels are full, Hutzot Hayotzer gets business," said Robert. "The 22 families here were the first to be affected by the closure of the studios, but there is a ripple effect. For our particular business, Jerusalem Tallit, it means our seamstress cannot work and we cannot buy wool."
Recognizing that tourism will likely be the last sector to recover, Robert describes the future as a "little bit grim" but that one cannot sit idly by and worry.
"We started an online business and the future is selling online. A lot of our business is connected to synagogues – handweaving tallitot and interior design," he said. "When synagogues are closed, they are not interested in any projects. It is also traditional for the bride's family to buy a tallit for the groom, but all that has changed and stopped."
As far as the Kleimans are concerned, they are fighting the current coronavirus battle on their own. Like many self-employed workers, they are yet to receive any assistance from the National Insurance Institute (Bituah Leumi) or the Tax Authority. Requests for rent deferral and reductions sent to the East Jerusalem Development Company (PAMI) have largely gone unanswered.
Carine's late father, Georges Goldstein, was among the first two artists to open the colony in 1969 with his own tapestry studio. Half a century later, they are uncertain whether "Judaica art can survive" the coronavirus outbreak.
Turning to his apartment business Kleiman Real Estate, which he describes as a "boutique version of Airbnb," Robert explains that the Internet cannot replace a company reliant on building personal relationships. Positive customer experiences are based on the success of his recommendations, whether it is requests for tour guides, car rental or caterers.
"All my apartments are empty and I cannot see any kind of short-term future as to how this can be resolved, both in terms of renting apartments for short-term visits or the owners being able to come to enjoy their second holiday home that they bought in Jerusalem," he said.
"There are many advantages of family businesses, where you work on your own, but it could be that only the very strong agency companies will survive, and the individual agents might not. When the apartments are full, they engender business locally – shops, restaurants and tourists meandering through Mamilla. Now it is simply dead."