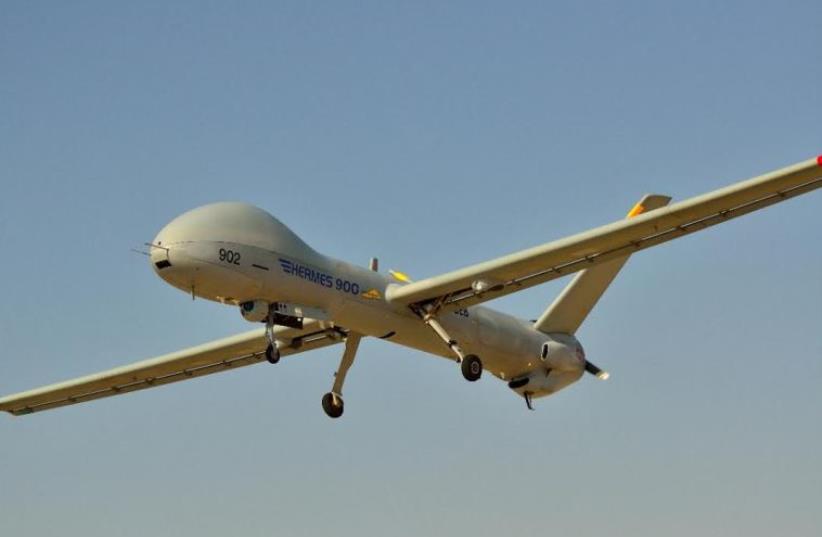 The Elbit-made Hermes 900 unmanned aerial vehicle
(photo credit: ELBIT)
Advertisement
The Israel Air Force’s fleet of Hermes 900 drones are undergoing a series of upgrades to improve their capabilities against the terrorist organizations that lie across Israel’s borders, a senior official from Elbit Systems, which produces the platforms, said.Elad Aharonson, executive vice president and general manager of the recently formed Intelligence and ISTAR (intelligence, surveillance, target acquisition and reconnaissance) Division at Elbit, said on Monday that upgrades are taking place to tailor the Hermes 900 to the IDF’s need to monitor quickly disappearing guerrilla-terrorist targets.The Intelligence and ISTAR Division was formed in May, when Elbit’s Elop (electro-optics) and Unmanned Aerial Systems (UAS) Divisions merged with ISTAR. The Hermes 900 can carry a wide range of intelligence-gathering payloads.The IDF began operating the drones before Operation Protective Edge in the summer of 2014, deploying it against Hamas and Islamic Jihad, and has since grown reliant on them. Today, the drones are an intrinsic part of the IDF’s order of battle.Elbit has delivered most of the IDF’s orders of the platform, and Aharonson said he believed more orders would soon follow.“The IDF has a reliable fleet of drones,” he said. “We are developing the next generation of capabilities with the defense establishment. Naturally, we try to stay a step ahead of the other side.”Although specific details of the upgrades remain classified, they allow Elbit’s clients to enhance capabilities “in accordance with changing threats. There is a difference between preparing for war with the Syria military six years ago, and dealing with terror organizations today, whether it’s threats in Syria, Lebanon, Gaza or [the] Sinai [Peninsula]. The latter threats have difference characteristics. They hide.”Some 80 percent of the company’s products go to foreign exports, while 20% are for IDF use. Elbit has, according to foreign reports, sold six Hermes 900 to Switzerland this year, and sold additional drones to a Latin American client.The May merger of three Elbit divisions was aimed at creating “integrative solutions for an array of intelligence gathering capabilities, from electro-optics to electronic and communications intelligence,” Aharonson stated.The merger enables unprecedented options, such as using one platform to track signals, visual and thermal images, and radar signature, he added.“The need for multiple layers of intelligence is growing. Today, customers tell us what they need, and we say what solutions we can offer,” he said.The data must also be transmitted in real time to ground control stations, processed and fused together. Multiple- layer intelligence produces a “much higher chance” of locking in on targets, Aharonson said. “There is technology here that look like science fiction.”In April, IAF officers told The Jerusalem Post that the Hermes 900 can disrupt the activity of any enemy that attacks Israel.The medium-altitude, long-endurance drone came into service during a sped-up process in the first days of last summer’s Gaza conflict, they said.