“This is a multi-year plan," says Erdan, "not a plan that will make a miracle after almost 70 years of neglect.” 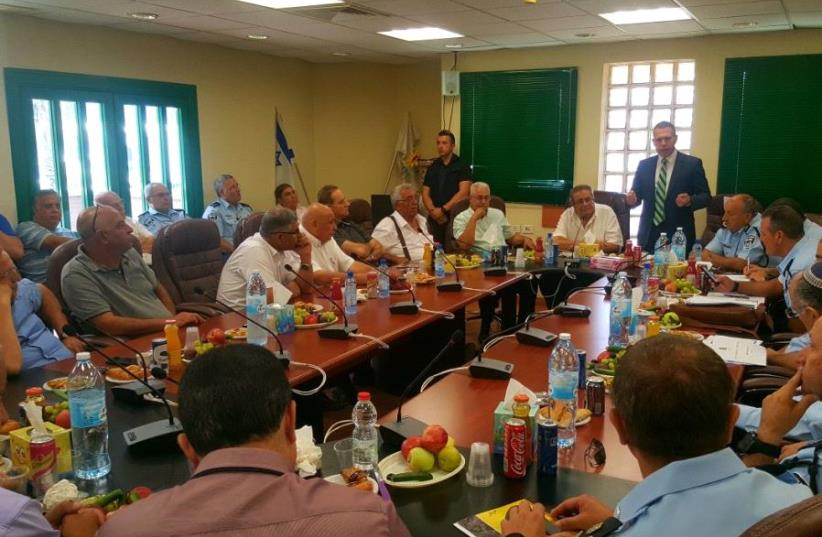 Gilad Erdan meeting with 20 mayors of Arab-Israeli communities to discuss policing
(photo credit: SPOKESMAN FOR MINISTER GILAD ERDAN)
Advertisement
Public Security Minister Gilad Erdan on Tuesday announced a weapons collection program, by which residents of Arab-Israeli communities will receive immunity if they hand in unlicensed weapons to designated centers.“They will receive full immunity from any police investigation,” Erdan said during a meeting with 20 Arab mayors on Monday. The minister added that this program was authorized by Attorney-General Avichai Mandelblit.According to Erdan, the weapons will be collected in places decided on by the municipalities, not in police stations. “We want to act together with the mayors who know their citizens better than we do.”Arab localities have long struggled with a lack of policing and an abundance of illegal weapons. In June, Kafr Kasim Mayor Adel Badir accused the police of dealing with his residents with a heavy hand while letting criminals roam free. “For months we’ve been asking the police to deal with the organized crime here. But instead of dealing with the crime they come in a brutal way and harass people in the street,” he said after a civilian security guard manning a police station in the city opened fire at a group of rioters, killing one.Erdan says he is trying to improve policing in Arab towns as part of NIS 2 billion plan. However, some community leaders and Arab Knesset members accuse the police and Erdan of inciting against Arab citizens and failing to provide law enforcement for regular offenses, instead treating the community as a security threat.“For too long, Israel has allowed gaps to develop between the police services offered to Jewish cities and Arab communities,” Erdan said in a phone interview with The Jerusalem Post on Sunday.“This is a multi-year plan. This is not a plan that will create a miracle after almost 70 years of neglect,” he told the Post, adding that the Israeli-Palestinian conflict contributed to the tense relations.According to the Mossawa Center, a Haifa-based advocacy group, police have killed 48 Arab citizens since 2000.Erdan and the police opened an Arabic media campaign on Sunday, to promote a “positive atmosphere” between the force and Arab citizens. A parallel radio campaign featuring Israel’s highest ranking Muslim police officer, Asst.-Ch. Jamal Hachrush, is calling on Arabs to join the force and support the establishment of police stations in their communities.