"This is a fascinating testimony of the intensive bombardment by the Roman army, led by Titus, on their way to conquering the city and destroying the Second Temple," says IAA. 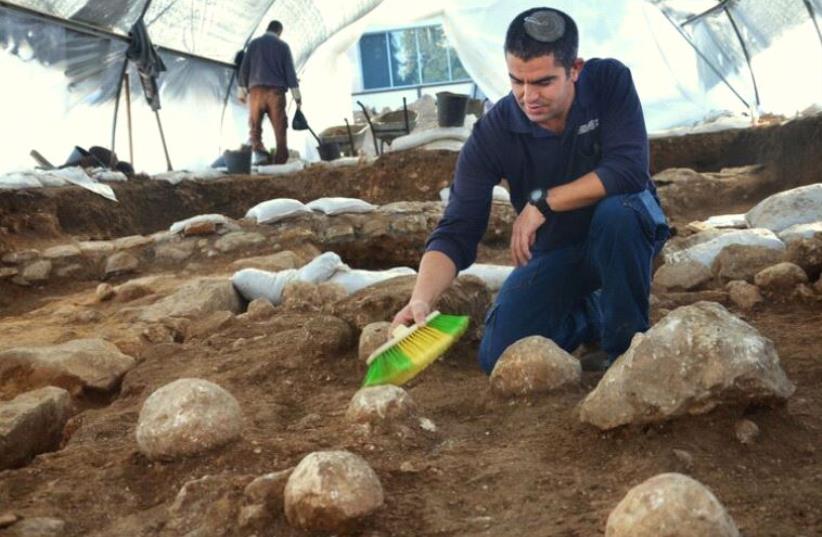 IAA Excavation Co-Director Kfir Arbib cleans one of the unearthed sling stones found at the site
(photo credit: YOLI SHWARTZ AND ISRAEL ANTIQUITIES AUTHORITY)
Advertisement
Compelling evidence from the breaching of Jerusalem’s so-called “third wall” – which was said to surround the capital during the Roman destruction of the Temple in 70 CE – may finally help to conclusively prove its existence.The Antiquities Authority on Thursday said the remnants were first discovered last winter in the capital’s downtown Russian Compound, where the new sprawling campus of the Bezalel Academy of Arts and Design is being constructed.During the legally mandated excavation that preceded the beginning of construction, archeologists discovered the remains of a tower jutting from the ancient wall, which could shed light on Jerusalem’s boundaries on the eve of the Roman onslaught led by Titus. 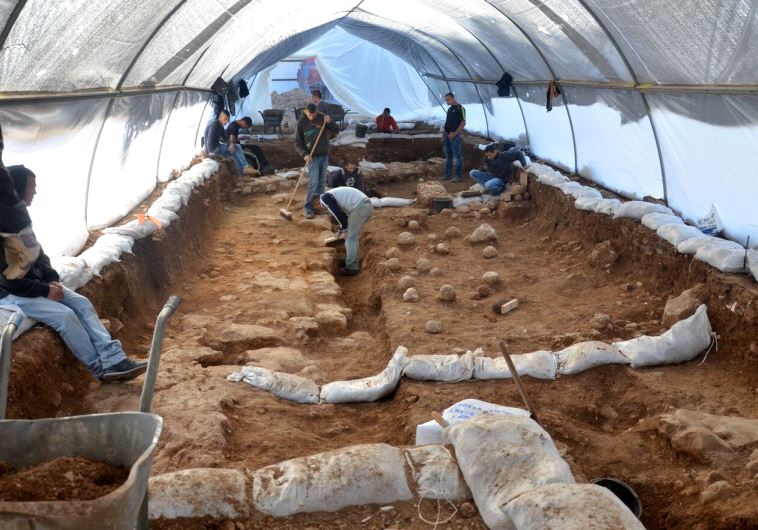 (The excavation site in the capital’s downtown Russian Compound. Photo By: Yoli Shwartz)Moreover, opposite the tower’s western façade, scores of ancient ballista and sling stones that the Romans fired from catapults at the Jewish guards stationed on top of the tower to defend the wall were discovered, further buttressing proof of its existence.According to Dr. Rina Avner and Kfir Arbib, excavation directors on behalf of the Antiquities Authority, the finds provide telling testament of the brutal Roman offensive against the city.“This is a fascinating testimony of the intensive bombardment by the Roman army, led by Titus, on their way to conquering the city and destroying the Second Temple,” the archeologists said in a joint statement.“The bombardment was intended to attack the sentries guarding the wall, and provide cover for the Roman forces, so they could approach the wall with battering rams and thereby breach the city’s defenses.”The historian Josephus, a witness to the war, recorded numerous details about the third wall. In his telling, the wall was designed to protect the new quarter of the capital, then known as Beit Zeita, which extended beyond its boundaries, north of the two existing city walls.Construction of the wall was begun by Agrippa I, Josephus wrote. However, he suspended its creation to avoid incurring the wrath of the emperor, Claudius, and to dispel any doubts regarding his loyalty.Still, construction of the wall resumed 20 years later by the defenders of Jerusalem as part of fortifying the city in preparation for the Great Revolt against Rome, according to Josephus.The famed historian described in detail the route of the wall, which began at the Hippicus Tower, now identified as David’s Citadel. From there, the wall continued north to the enormous Psephinus Tower, which defended the northwestern corner of the city wall.At that point, the wall turned east, descending toward the Tomb of Queen Helena, which is now identified with the Tombs of the Kings.The excavation’s findings will be presented during a conference titled “New Studies in the Archeology of Jerusalem and its Region,” to be held on October 27 at the Mount Scopus campus of the Hebrew University of Jerusalem.