Former spy must live under constant scrutiny, affecting his health and religious freedom. 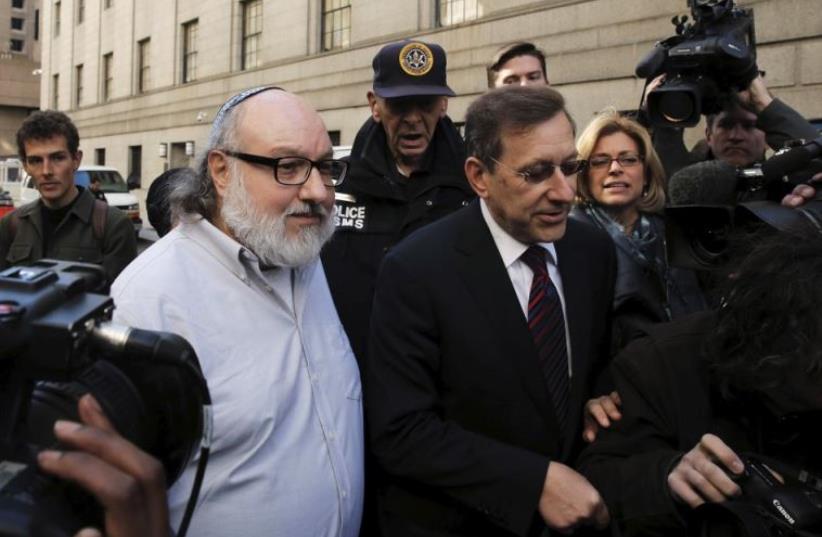 Israeli spy Jonathan Pollard leaves a federal courthouse in New York
(photo credit: REUTERS)
Advertisement
Jonathan Pollard, who was released from a US federal prison on November 20, will ask a district court judge in New York next Wednesday morning to ease the conditions of his parole, a representative of Curtis, Mallet-Prevost, Colt & Mosle LLP, Pollard’s law firm, told The Jerusalem Post exclusively on Thursday.Pollard, who was convicted in 1987 of spying for Israel, is subject to parole conditions that require him to wear an electronic ankle bracelet at all times for GPS tracking of his whereabouts. He is also subjected to unfettered monitoring and inspection of his computers and those of his employer. Not only can he not move to Israel as he desires, but he cannot leave his home in New York City before 7 a.m. or return home after 7 p.m.The parole conditions have put in limbo an offer Pollard received to become a research analyst in the finance department of a respected investment firm. Pollard suffers from chronic leg and ankle swelling, which makes the ankle bracelet problematic for his health.
Jonathan Pollard freed from prison after 30 years
His curfew makes it difficult to travel to and from work, to attend prayer services, or to accept invitations to dinner on the Sabbath and holidays from friends and relatives.Affidavits filed by Pollard pro bono attorneys, Jacques Semmelman and Eliot Lauer, which were obtained by the haredi (ultra-Orthodox) newspaper Hamodia, state that the parole conditions are “guaranteed to deprive Mr. Pollard of his ability to observe the most basic tenets of his religion, Judaism.”The affidavits reveal that the GPS monitoring system consists of a non-removable transmitter installed on Pollard’s wrist, and a receiver that is plugged into an outlet in his residence. Whenever he moves outside the range of the receiver, the transmitter – which is about eight cm. long and five cm. wide – tracks his location.The transmitter – which Pollard must wear seven days a week – must be charged daily.When fully charged, it lasts for a minimum of 12 hours and up to a maximum of 20 hours; the battery drains faster while outside the range of the receiver. It takes about two hours to reach a full charge, and Mr. Pollard must sit in a stationary position for the entire time the device is recharging.The affidavit submitted from Pollard’s rabbi, National Council of Young Israel executive director emeritus Rabbi Pesach Lerner, explains that according to Jewish law, one is prohibited from inserting an electrical plug into an outlet or removing one from an outlet on Shabbat. The rabbi wrote that Pollard is also prohibited by Jewish law from answering a phone on Shabbat, but is obligated under the conditions of parole to respond promptly to his probation officer’s phone calls monitoring his compliance.